Letter to the Editor: Jewish Tradition Does Not Support Richard Spencer Getting Punched 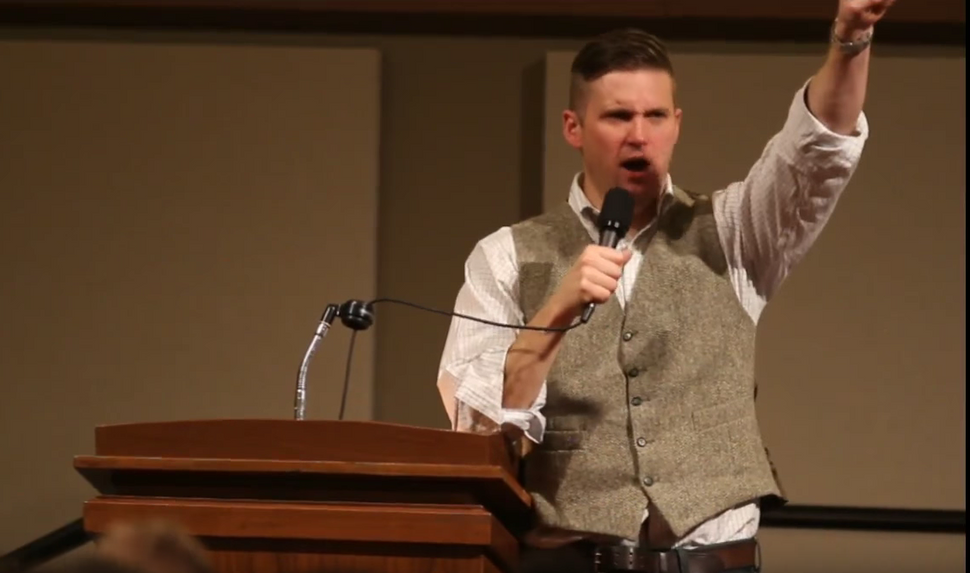 Recently a white supremacist, Nazi lover named Richard Spencer was punched in the face while giving a speech on camera during Donald Trump’s inauguration.

This is the same Nazi lover who just recently terrorized Jewish families in Whitefish, MT, where he and his family live.

In response, some well-meaning rabbis have been gathering sources and discussing whether this vigilante action is permitted. The Forward has even published a source sheet which shows that some texts from the Jewish tradition support this type of attack upon Spencer.

Just like The Forward, a publication I recently contributed, to would never publish those texts that are cited by some bigoted rabbis to support vigilante attacks on mosques, so too is The Forward wrong to publish these texts in this manner without proper context and without the teacher clarifying that these texts must not be acted upon in a vigilante manner.

We need to be absolutely clear about this attack upon Richard Spencer: It is a terrible thing that happened when Richard Spencer was punched in the face. Discussing his attack in an even-handed manner is wrong and immoral and may promote further violence.

We have seen in our recent history that Jewish texts have been used on occasion to inspire violence. We need to be extraordinary vigilant and condemn such vigilantism clearly and unequivocally.

Our tradition is not one that glorifies pacifism. But it is a tradition that limits violence to areas that are legal and productive for society. As Rabbi Joseph Soloveitchik writes, “Revenge is forbidden when it is pointless, but if one is aroused thereby to self-defense, it is the most elementary right of man to take his revenge” (Kol Dodi Dofek, 1956).

This type of attack upon Richard Spencer is worse than pointless. It is counterproductive and if unchecked, will lead us to becoming the very society that Spencer and his cronies desire: a society which embraces violence and where might makes right.

In our pursuit of our values we must remember that we cannot defeat them by becoming them. If we become them, then it is they who have defeated us.

The most effective long term way to get our our message across is through non-violent, peaceful actions. If our society is so broken that we are forced to raise a stronger voice, then civil disobedience, in the spirit of Ghandi and King, may be called for.

While it might feel good for some to watch and rewatch a gif of Spencer getting punched, such an attack is not just an attack on Spencer, it is an attack on our entire society.

Shmuel Herzfeld is the Rabbi at Ohev Sholom — The National Synagogue

Letter to the Editor: Jewish Tradition Does Not Support Richard Spencer Getting Punched