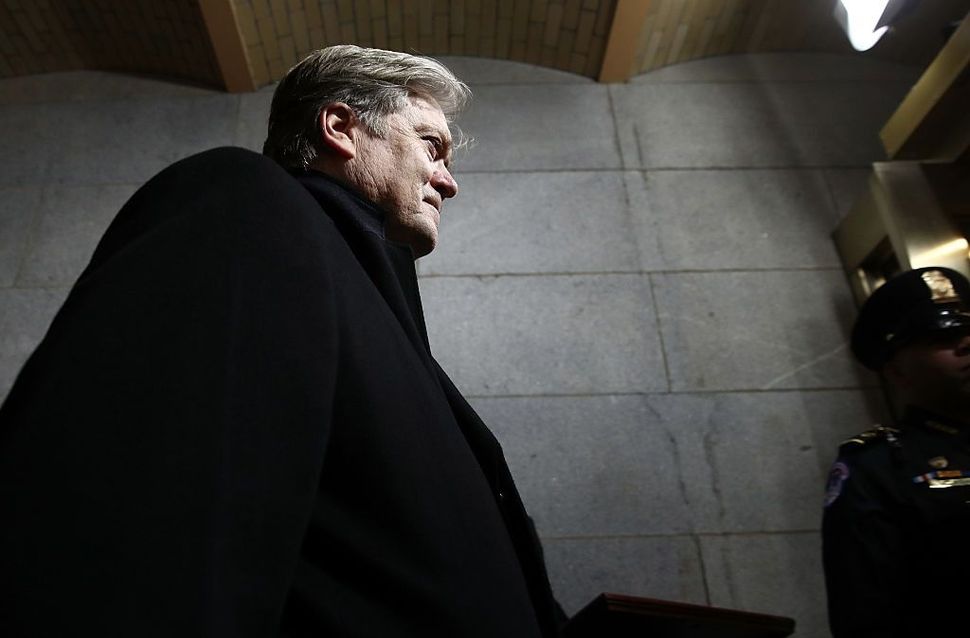 Last Friday night, Jared Kushner and Ivanka Trump hosted their first Shabbat meal in their new home in Washington DC. Among the invitees saying kiddish were influential members of the new Trump administration.

The next day, one of the attendees, Hope Hicks, Trump’s Director of Strategic Communications, spent her Saturday publicly defending and applauding the White House’s statement marking International Holocaust Remembrance Day — which somehow neglected to mention the deaths of six million Jews.

At first, the excising of Jewish suffering appeared to have been an oversight. The new administration is quite new and lacks a full staff. But it soon became apparent, however, that the administration intended to double and triple down on its shameful decision, rolling out Hicks on Saturday and Reince Preibus on the Sunday morning talk shows. The decision sparked wide condemnation from right-wing groups, such as the Republican Jewish Coalition, the Zionist Organization of America and the Simon Wiesenthal Center, whose director Rabbi Marvin Hier had led a prayer for the incoming President at his inauguration.

In his post for Commentary magazine, John Podhoretz (my former boss) analyzed Hicks’ outrageous spinning as “the culmination of decades of ill feeling that seems to center on the idea that the Jews have somehow made unfair ‘use’ of the Holocaust and it should not ‘belong’ to them. Someone in that nascent White House thought it was time to reflect that view through the omission of the specifically Jewish quality of the Holocaust. Now the question is: Who was it?”

I have a hunch just who it was.

Playing down the Jewish nature of the Shoah sounds like Breitbart thinking, which deplores any semblance of a “victim-mentality.” A simple search of the site’s archives reveals an obsession with the term, and it might even apply to Jews who have a “victim-mentality” about the Holocaust, which the alt-right simultaneously claims never happened, and also applauds.

Over the weekend there was also a great deal of hysteria, some justified, some not, about one of Trump’s first executive orders regarding the entry of citizens from seven Middle Eastern countries, including holders of green cards and those on refugee visas, into the United States. On Saturday night the ACLU convinced a Brooklyn Federal judge to strike down at least part of the order, and much of the media focused on the story and the spontaneous protests at airports that followed. The firestorm gave the administration a black eye, but I believe the new policy actually achieved its intended goal: to divert attention from Trump chief strategist Steven Bannon’s consolidation of power in the White House.

While the Holocaust Remembrance Day firestorm was likely an unintended controversy, the attention on the immigration executive order was not. The New York Daily News reported that Bannon was the “architect” of the travel ban. Indeed, the parts of the order most likely to be overturned judicially — the inclusion of green card holders and those who have already been granted visas — again reads like a Breitbart editorial.

At the same time Bannon was writing executive orders, news broke that Trump had appointed him to the National Security Council (NSC) while at the same time removing the Director of National Intelligence and the chairman of the Joint Chiefs of Staff from one of the president’s key advisory groups. The news of Bannon’s new job brief sparked some criticism — Republican Senator John McCain called Bannon’s appointment “a radical departure from any National Security Council in history” — but other outrages generated more attention.

These moves to distract the media are textbook Trump. He promotes a story that elicits outrage (last week the executive order, and this week Trump’s Supreme Court nomination), behind which hides The Story, the one we should actually be paying attention to. This week, The Story isn’t an executive order so flawed it’s likely to be ripped apart in the courts, or the despicable trivialization of Jewish suffering and history; it’s Steve Bannon’s outsized influence in domestic politics and foreign policy. Jewish organizations and protesters — not to mention the media — must not be driven to distraction, and must highlight Bannon’s troubling and growing power in the Trump White House.