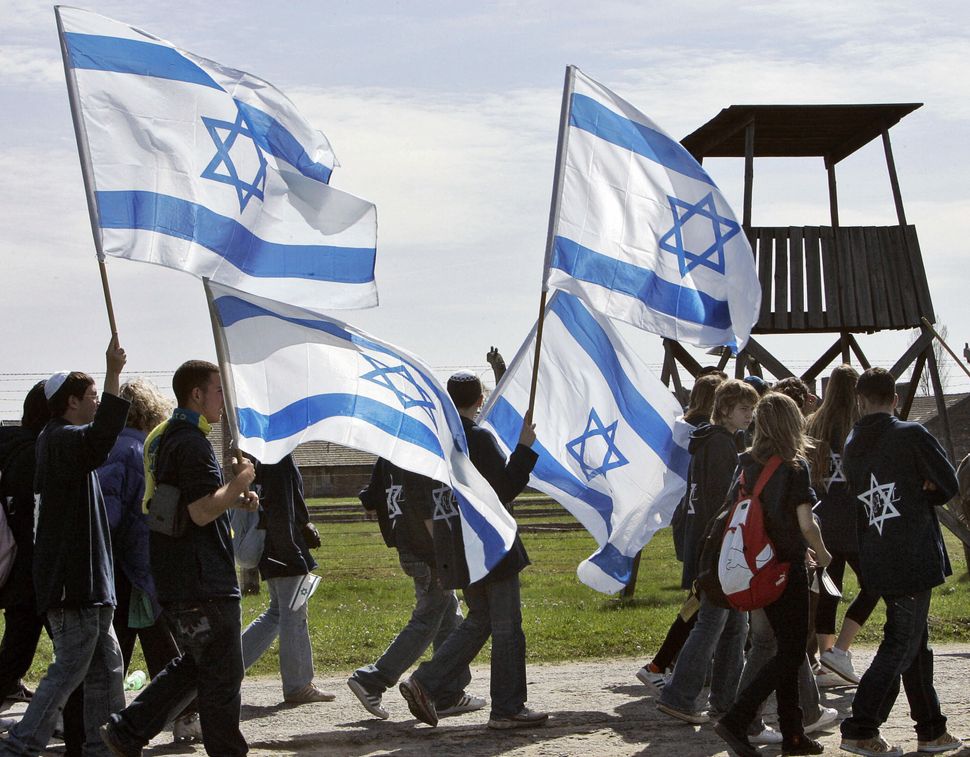 Nearly 25 years ago I traveled to Poland to participate in the March of the Living, to “study the history of the Holocaust and to examine the roots of prejudice, intolerance and hate,” as the program’s website explains.

Our group visited Nazi death camps and Jewish ghost towns, seeking to gain a better understanding of the destruction that happened there. In every place we visited, we could feel the presence of lost Jewish life.

When one marches, as we did throughout Poland wearing blue coats emblazoned with Stars of David, one expresses life. When one walks through a Holocaust death camp, as we walked from Auschwitz to Birkenau on the climactic day of our march, one honors the dead.

So when I read a recent article in The Forward about how the March had inspired White House Senior Adviser Jared Kushner to “solidify the teenager’s commitment to Zionism and a right-wing vision of support for Israel,” I was taken aback.

For me, the March deepened my resolve to work for a world of peace and tolerance. And it cemented my commitment to Israel as a refuge for the Jewish people. What it did not do was inspire me to work for an administration that would shut out those fleeing mass murder, such as is happening today with Syria’s refugees.

Because of the March, I devoted my career to peace. First, I joined the Peace Corps, where I wrote about my passion for Tikkun Olam, or healing the world, in my entry essay – a personal sentiment that was rooted in a rejection of what I saw in Poland. The March also deepened my Zionism, which is why I later chose to promote peace and security for Israel by becoming the founding political director of J Street.

It was therefore extremely troubling to watch the Trump administration, where Jared Kushner serves as a key advisor, issue an Executive Order to prevent Syrian refugees from coming to our shores – on International Holocaust Remembrance Day, of all days.

If anything, that day should have been one where we expressed solidarity with those fleeing an atrocity, not one when we slammed the door to freedom and safety shut.

Sadly, that executive order expressed the opposite of what I learned on the March.

The Holocaust was a monumental human failure. The exclusion and eventual mass murder of the Jewish people was visible for all the world to see – yet the world often turned its back on the Jews then, and calamity ensued. That shame still lives with us today. As Jews, we have been blessed to have had the opportunity to renew our culture since the Holocaust, to rise up from the darkness and create a positive world for ourselves. Yet no one can renew themselves alone.

Jews have prospered in the United States because we have been included in American life. We engage neighbors of all backgrounds, conduct business together, live together and are treated as equals. Jews have also succeeded in Israel largely because people around the world have invested in and supported the Jewish state.

No one people is an island unto itself. When we are, such as before and during the Holocaust, darkness descends.

I therefore hope that in the future, we choose to honor the victims of the Holocaust, not by turning our backs on refugees fleeing a new horror, but instead by doing unto others what we would have rather had done unto us during that dark period.

Joel Rubin is a former Deputy Assistant Secretary of State and congressional candidate in Maryland. He currently is the President of the Washington Strategy Group and can be followed on Twitter at @joelmartinrubin.