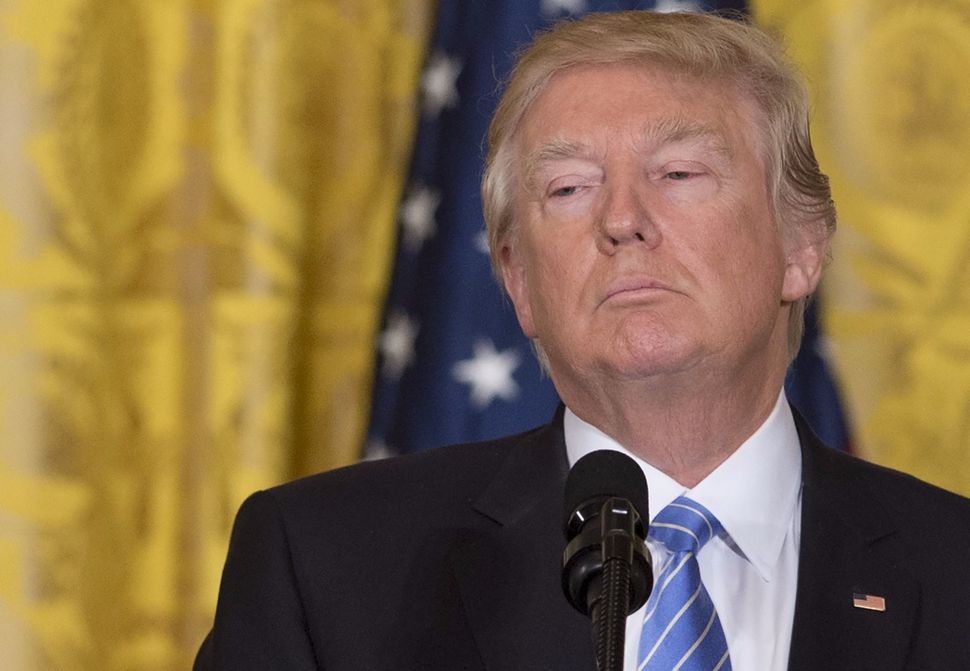 Democrats need a plan, and fast. Each new day brings another appalling revelation about the Trump administration’s endless capacity for incompetence and misbehavior. With each new outrage, a flock of Democrats takes to the streets or to the nearest Washington microphone, puffing out their chests and sputtering in helpless rage. And as they flail, Donald Trump’s caravan of indecency keeps on rolling along.

What the liberal opposition needs to do is get organized. They should start by figuring out what they’re up against. Separate what matters from what matters more. And they’ve got to also face up to a fundamental, crippling division within their own ranks that party leaders often pretend doesn’t exist.

Their dilemma boils down to this: Should they fight the Republicans’ imperial grip on Washington by standing up to the coming right-wing juggernaut and defending, however hopelessly, the things Democrats most cherish — reproductive rights, racial and gender equality, immigrant rights, Wall Street regulation, church-state separation? That is, should they aim merely to survive the next four years, valiantly fighting and mostly losing one battle after another, with an eye toward 2020? That’s Option No. 1.

Or, alternatively, should they view the Trump presidency not merely as a GOP victory on steroids but as an aberration — as the accidental ascendancy of an unbalanced con man whose inability to grasp the basics of governance, diplomacy and plain civility threatens the very underpinnings of our constitutional democracy? Should they devote every effort toward booting Donald Trump out of office? Remember, this second option, saving the Constitution, implies working to enable the constitutional accession of a deeply conservative vice president. That’s Option No. 2. Is that the way to go?

It’s tempting to believe protecting the liberal-progressive Democratic agenda and guarding democracy from a budding dictator go hand in hand. But they don’t. They actually neutralize each other.

Here’s why: The problem is that removing a president from office isn’t another one of those symbolic battles in which you march down the street chanting and waving a homemade placard and then go home feeling good. It requires a complex, disciplined legislative process. It can’t be done without willing Republican cooperation.

Some Democrats are following the occasional news reports about random GOP lawmakers and appointees, usually anonymous, losing patience with Trump’s antics. They’re hoping impeachment, or a declaration of presidential incapacity under the 25th Amendment, is just around the corner. It’s not.

Republicans strongly feel that they won the election and deserve to enact their agenda, whether it’s abortion restrictions or dismembering Dodd-Frank. They’re just as passionate on these issues as Democrats are on the opposite side. That passion led Republicans to take the unprecedented step of blocking Barack Obama’s last Supreme Court nomination. It led evangelicals and their family-values minions to back a serial philanderer and former casino owner for the presidency.

If Democrats let their opposition to Trump be perceived as an effort to steal the election back, as a backdoor way to weaken the GOP and protect abortion rights or same-sex marriage or anything else on the laundry list of culture-war issues that divide the two parties, there’s no chance that Republicans will join with them to take down their standard-bearer. They didn’t capture Washington, lock, stock and barrel, merely to hand over the keys to their opponents. That’s not how Republicans play the game these days. They play to win.

In considering this decision, Democrats and liberals must recall a basic truth of civics that both sides have forgotten over the last few decades. Democracy doesn’t mean only that winners of elections get to take charge. It also requires that the losers agree to lose. Therefore, if democracy is to function, both sides must accept the basic legitimacy of the other side — and its beliefs. This brings us back to Option No. 1 and the main issues that Democrats and Republicans have been fighting over for decades. Mostly they’ve fought over cultural and social values, much of them related to gender, as well as the definition and meaning of nation, community and borders. We fight over them because we believe our interpretations are morally right and the other side is wrong. But inherent in our willingness to lose and peacefully transfer power is the underlying assumption that the other side’s program — as much as we may hate it — is legitimate. We fight over our deepest beliefs, knowing that we might lose and suffer profound indignities until the next round. That’s how democracy works.

What’s illegitimate is an effort by government leaders to undermine the foundational rules of democracy. In the case of Trump, this includes relentless attacks on the judiciary and the free press. These attacks have the effect of delegitimizing those two fundamental institutions of our constitutional democracy. Either he doesn’t realize what he’s doing, which is appalling, or he does, which is worse.

Then there is the matter of Trump’s handling of his vast business holdings while in office. This includes using the enormous power of the presidential bully pulpit to attack department stores that drop his daughter’s products. It includes assembling a list of Muslim-majority countries that we suspect of harboring terrorists, but omitting the countries whose citizens have actually attacked the United States — but which happen to house significant Trump investments. And, crucially, it includes his refusal to disclose his tax returns, on the false excuse that he’s prevented by an audit, and thus leaves us incapable of learning where else he actually is invested and hence vulnerable to foreign pressure. Those actions undermine democracy. That’s illegitimate.

Finally, there’s the question of Russia. Evidence is mounting steadily that there was a covert but active connection between the Putin regime and the Trump presidential campaign. This might turn out to be one of the most devastating political scandals in American history. Or it might not. But we can’t know until it’s investigated fully. And the Republican congressional leadership is showing very little appetite for the sort of full-scale inquiry that followed Watergate, Iran-Contra or, for that matter, September 11.

This is a leadership that just spent seven years and millions of dollars hunting fruitlessly for some way to blame Hillary Clinton for the deaths of four Americans in Benghazi. This after shamelessly ignoring George W. Bush’s role in mistakenly sending 4,000 Americans to their deaths in Iraq. Which followed their bringing Washington to a halt to impeach Bush’s predecessor over a sexual dalliance. Now this same Republican leadership can’t seem to stir themselves to investigate whether or not we just elected a Russian agent as our president.

Why not investigate? Their motive goes beyond mere party loyalty. A major factor is the GOP’s desperation to hold onto power and thus protect and advance their agenda. Republicans view Democrats’ pressure for an investigation of Trump as a quasi-judicial coup to steal the power that the Republicans won at the ballot box.

Democrats shouldn’t give them that excuse. As offensive as Democrats might find this GOP behavior, there’s a bigger problem right now. Each side carries deep grudges. They’re beside the point now.

What to do? The two party leaderships could quietly negotiate a mutual cease-fire. Agree in advance not to use the removal process as a backdoor for Democrats to delegitimize Republicans and their agenda. Keep the focus laser-like on defending the Constitution. That means taking the other issues off the table for the duration of the investigation and removal process. Note that we presuppose removal after the investigation. Even in the unlikely event that we learn Russia didn’t play a role in the election — and we’ll never know for certain whether the Russian hacking helped sway those 77,000 voters in three states who turned the election — Trump’s other failures, the known and transparent ones, render his continued presidency intolerable.

Of course, the Democratic leadership can’t control its base. On both sides there will be thousands, perhaps millions, who will insist on fighting on to defend values and priorities that the other side finds morally repugnant, continuing the culture war that’s brought this country to the brink of ungovernability. The leaders can’t stop them, and probably shouldn’t. But they can agree to leave those battles outside the Beltway, to refrain from endorsing or abetting the streets’ passions until the existential problem of Trump is resolved.

The bottom line, then, is that if Democrats want to remove Trump from the White House, they must decide that it is more important than protecting the specific values and policies they been fighting for over the past half-century or more.

If, on the other hand, the policies are more important — no small point, since we’re talking about a host of what Democrats view as basic human rights — they must accept that for the next four years Washington will be led by a Republican Congress, a Supreme Court locked into an unbreakable conservative majority for the next generation and a dangerous, emotionally crippled loose cannon of a president in the White House. Yes, Democrats need to start figuring out how to win an election. In the meanwhile, frustration and desperation shouldn’t blind them — us — to the urgency of putting a rational adult into the Oval Office, no matter how strongly we disagree with him.