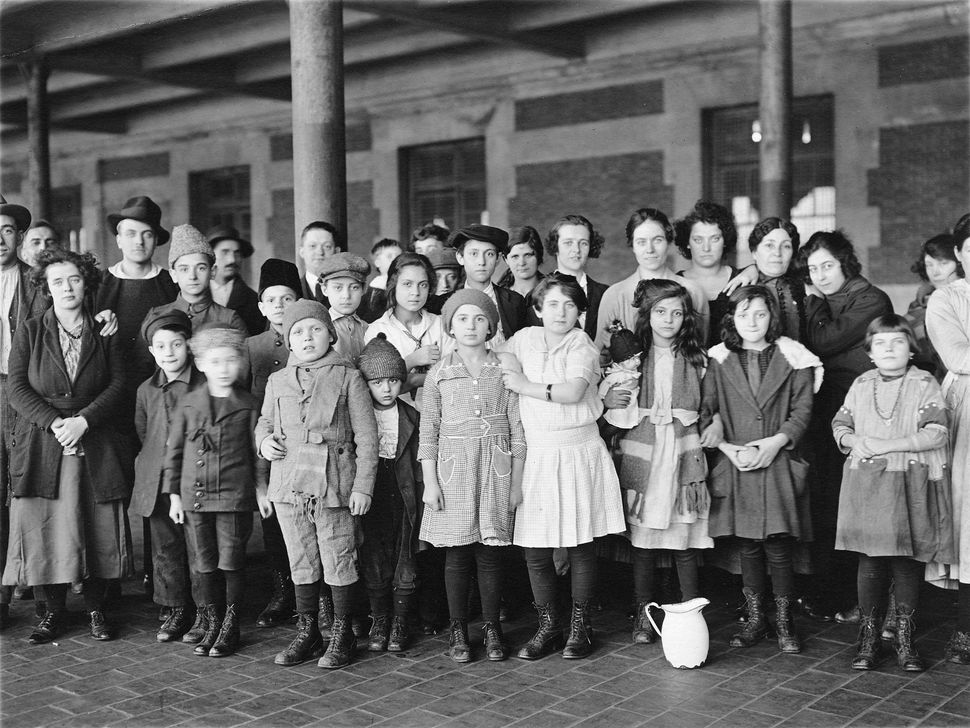 We know it now as one of the most scurrilous proposals in American history. But give those two Pennsylvania politicians credit. When Democratic Sen.David Reed and Republican House Member Albert Johnson introduced what became the Immigration Act of 1924, eviscerating legal immigration to the United States for Jews, Italians and others — and banning Asians entirely, they were perfectly candid about their motives.

“… keep American stock up to the highest standard — those… born here,” Reed said. Don’t infect the United States with “a stream of alien blood,” Johnson said. They faced little opposition, though one young Jewish member of Congress, Brooklyn’s Emanuel Celler, argued passionately against it.

Measured by effectiveness, the bill proved a success. In 1921 about 119,000 Jews came to the United States. In the first five years after the Immigration Act became law the average plummeted to about 11,000 per year. The quotas stayed in place long past the Holocaust, when they trapped millions of Jews who wound up not at Ellis Island, but in places like Auschwitz.

That’s right. Trump once said, “It’s fine if [immigrants] come in, but they have to come in legally.” This bill would cut immigration by those trying to follow his wishes to 500,000 from about a million a year. That’s not fine.

Naturally, the rhetoric this time is not about race. It focuses on jobs — on “helping Americans first,” Cotton contended, echoing the largely discredited theory that immigration takes jobs away from people born here.

Don’t be fooled. This bill tries to allay one of the Republicans’ greatest fears: the Census projections that by about 2043, most Americans will be nonwhite. Hispanic Latino (and to some extent Asian) immigration and birth rates make that likely even if illegal immigration sinks to zero.

This isn’t a theory. The effect is already clear in presidential elections. Mitt Romney got exactly the same percentage of the white vote in 2012 as Ronald Reagan did in 1980. Why did Reagan win in a landslide and Romney lose in one? Why? Because 90% of voters were white in 1980. By 2012 only 72% were. The white decline continues, though Donald Trump captured enough of the demographic to win the election. Still, Hispanics, frightened — reasonably — by Trump, voted 74-24 for Hillary Clinton.

The Census prediction scares many Republicans. One survey measured how voters reacted to the phrase “the idea of an America where most people are not white bothers me.”

Sadly, 15% of Democrats said yes. But 33% of Republicans gave the same answer.

Pollsters have also measured one more way Democrats and Republicans differ about immigrants. Do they hurt America overall? Twenty-four percent of Democrats say yes — and 63% of Republicans. It is what led one writer to title a New Republic article describing Republican immigration views, “Fear Of A Non-White Nation.”

Like the 1924 Act, the Cotton-Perdue plan will work. How many immigrants would it cut in the decades ahead? “At least 30 million,” predicts Mark Hugo Lopez, Pew Research Center’s director of Hispanic research. By 2065 the United States would have not the 78 million immigrants Pew Foundation surveys estimate, but about 33 million. That would keep the majority of Americans white for decades more.

Still, though Republicans control the White House, Senate and House, Democrats can block this bill.

First, there are states, even red states, where immigrants form too big a voting bloc to ignore. Consider the Hispanic-Latino populations in New Mexico (48%), California and Texas (39% each), Arizona (31%), Nevada (27.8%), Florida (24.1%) and Colorado (21.2%). Hispanics don’t need a majority to influence Republicans — not when a 1% or 2% margin can mean victory. Democrats can find Republican partners like Arizona’s John McCain and Jeff Flake, Nevada’s Dean Heller, Texas’s John Cornyn and Ted Cruz, Florida’s Marco Rubio, and New Mexico’s governor, Susana Martinez. Sen. McCain has already announced his opposition. Along with those like the hundreds of corporate CEOs opposing Trump’s Muslim ban, Democrats should at least be able to mute the bill’s effectiveness.

But there’s a more important issue than which party wins. For does anyone believe that Cotton and Perdue — and Trump — would waste five minutes on this disgraceful idea except that so many Republican voters hate the thought of having neighbors with brown skin? This bill exists solely because of bigotry. Sure, Cotton and Perdue would deny that prejudice motivates them. But their own views are irrelevant. They are like store owners opposed to cigarettes but selling them anyway to please customers.

Emanuel Celler, that lone vociferous voice back in 1924, ended up having a long career. He was still in Congress in 1965 to help Ted Kennedy overturn that dreadful 1924 Act.

But in later years, he thought he could have done more.

He would tell the story of a rabbi who came to his door during World War II, pleading for his help. Celler tried to defend Franklin Roosevelt’s policy. The rabbi said, “Killing 6 million cattle would attract more attention.”

Of course, there is more opposition to bigotry in the 115th Congress than there was in 1924.

But Republicans control the House, Senate and White House. They may soon at least nominally control the Supreme Court. We cannot ignore the temptation for principled Republicans to give in to their bigoted partners. When there are so many constructive ways to bring change to America, both parties should fight this disgraceful attempt to prevent the browning of it.