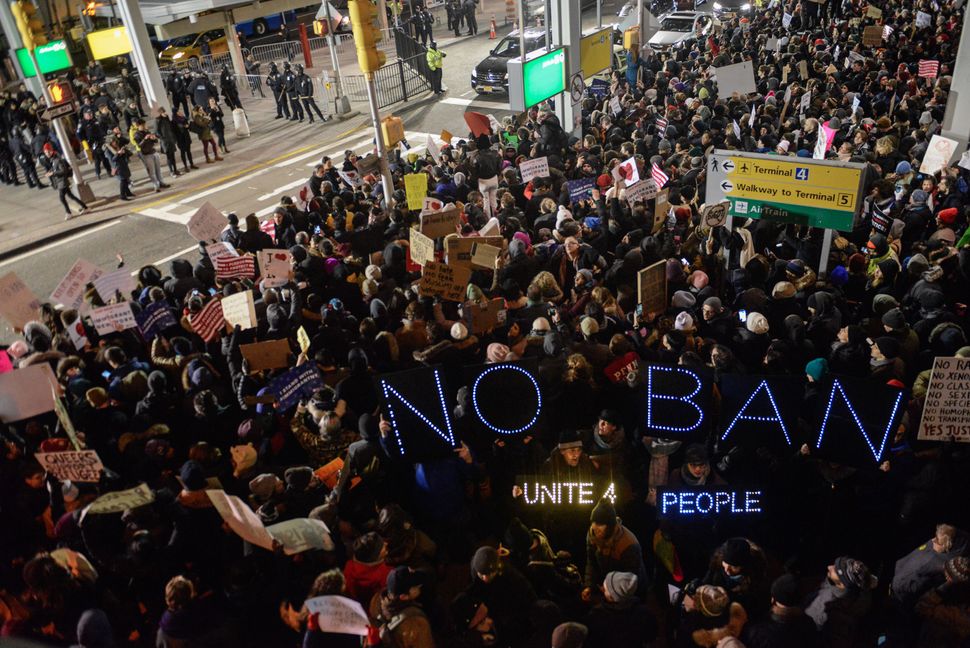 The Trump administration’s executive order to ban refugees from seven Muslim-majority countries and to give preference to Christians has now forced leaders of all faiths to declare how American they truly are.

By American, I do not mean the perverted notion of nationalism embedded in President Trump’s offensive, unnecessary and damaging travel and immigration ban. I mean the America on display at international airports this past weekend, when thousands spontaneously converged to welcome and assist the suffering, in many cases using religious vernacular and ritual to frame their just protest.

By American, I do not mean the pretend religiosity of people like Jared Kushner and Ivanka Trump, who made a big show of praying at a rebbe’s grave before the election, and hosting VIPs for Shabbat dinner on the very day that their father and patron announced this despicable ban, but have uttered nary a public word of protest. I mean the America in which churches, mosques and synagogues help resettle those fleeing from war and strife. I mean the America in which of the nine national agencies that resettle refugees, six are faith-based groups. I mean the America that refuses to be a fortress built on fear but aspires to be a beacon of liberty to those of all faiths.

That is the religious America that emerged this past week, as rabbis and other religious leaders led demonstrations, and houses of worship organized civic actions, and faith leaders of many religions denounced the ban. But there is still an unconscionable silence from some supposed faith leaders, and worse, support for the ban from others.

Trump’s executive order, partially stayed thanks to the federal courts but still devastatingly effective, is unjustified: The countries involved share no blame for the infinitesimally small percentage of deaths caused by Muslim jihadis in America. It is possibly unconstitutional. It is politically and economically self-defeating and a threat to our security, making it much more difficult to conduct intelligence, recruit talent and further educational achievement.

And here I am, not even mentioning the humanitarian imperative to bring to safety those who have risked their lives to help this country — brave patriots who have done far more to secure America than Donald Trump has in seven decades.

The Jewish organizations that still support this anti-Muslim action — notably the Zionist Organization of America — have lost all moral standing. Period. The Jewish organizations that have so far remained silent — including the Republican Jewish Coalition and the American Israel Public Affairs Committee — are fast diminishing their ability to lead unless they quickly and loudly speak out.

Evangelical Christians, who overwhelmingly voted for Trump by nearly the same percentage that Jews voted against him, will have lost all legitimacy if they endorse this most un-Christian of deeds. Fortunately, many of their leaders are taking forceful and public stands to support immigrants, but others — including the well-known Rev. Franklin Graham, son of the even more well-known Rev. Billy Graham — are doubling down on their misguided contention that Islam is “evil” and a ban is necessary.

Keep that in mind the next time the good reverend lectures us about morality.

Even the Jewish leaders who rank support for the current Israeli government first, second, third, fourth and fifth on their priority list, and therefore are embracing Trump for his warm overtures to Prime Minister Benjamin Netanyahu, ought to think again. Trump’s nonsensical ban on Muslim refugees could dramatically harm Israel’s safety because it disrupts a delicate world order that until now has protected the Jewish state.

Elizabeth Ferris, senior fellow in the foreign policy program at the Brookings Institution, wrote last week that “these actions also threaten a carefully-constructed international system for responding to people fleeing persecution and conflict. This system was intended not only to protect the rights of those forced to flee violence but also to prevent refugees from threatening international peace and security…. [I]n the name of an ‘America First’ foreign policy, [Trump’s actions] threaten that system.”

In fact, Israel — which has much more to fear from the Islamic-inspired terrorism in its neighborhood — is taking an approach that is the opposite of Trump’s, one to emulate here. Last week, the interior minister announced that Israel was accepting 100 Syrian orphans, who will be placed in Arab-Israeli families and be eligible for full citizenship in four years.

This is one of the defining moral moments of our time, especially for Jews, especially for American Jews. There can be no equivocation. There’s only one kind of America for us, and it is not Donald Trump’s.