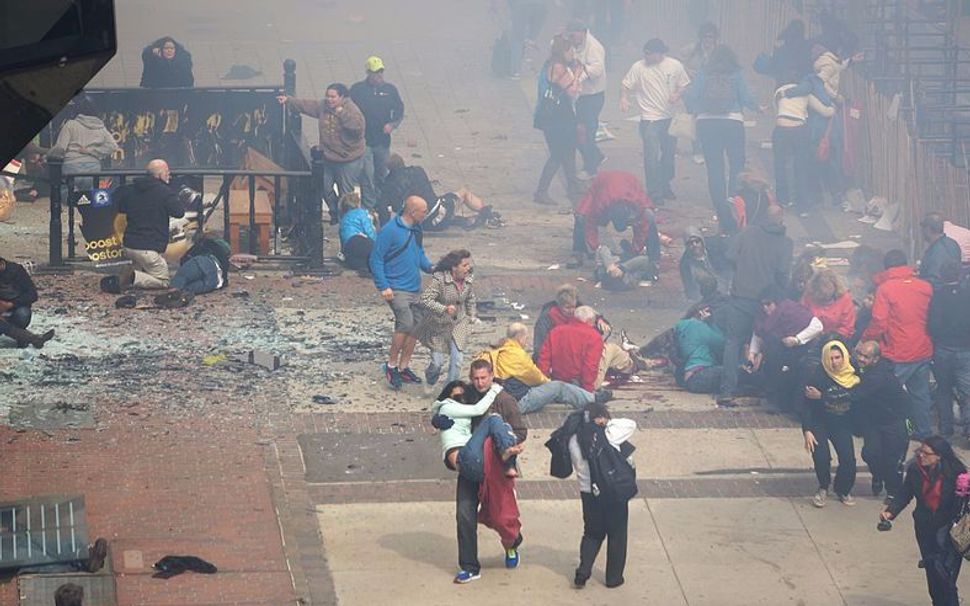 The left’s confusion about what constitutes “morality” compels us to respond to Forward editor Jane Eisner’s criticism of the Zionist Organization of America (ZOA) because ZOA supports President Trump’s executive order titled “Protecting The Nation From Foreign Terrorist Entry Into The United States.”

Most Americans, according to a recent Rasmussen poll, agree with ZOA: Americans overwhelmingly favor Trump’s order, 57% to 33%.

The purpose of Trump’s executive order is to establish a vetting system that protects all Americans from ISIS and other foreign terrorist infiltrators’ attacks. The order explains: “Numerous foreign-born individuals have been convicted or implicated in terrorism-related crimes since September 11, 2001, including foreign nationals who entered the United States after receiving visitor, student, or employment visas, or who entered through the United States refugee resettlement program.”

Foreign-born terrorists carried out 9-11, as well as the San Bernardino and Boston Marathon massacres. Many more foreign terrorists have attempted attacks. U.S. synagogues and Jewish schools are frequently threatened, and have had to become virtual fortresses. It’s not “immoral” to reduce dangers to our children.

President Trump’s executive order calls for reviewing our screening processes and establishing adequate standards to prevent infiltration. The temporary suspension of immigration from seven countries that the Obama administration identified as “countries of concern” (only 7 out of 53 Muslim majority nations) facilitates establishing such a proper vetting system. This is not only moral; it’s a moral imperative. Protecting U.S. citizens is “Job One” for a responsible president.

Moreover, Trump’s executive order allows individuals from “countries of concern” to enter the U.S., on a case-by-case basis, during the suspension period. This humane provision enables admission of those especially deserving refugees whom the left wrongly claims are absolutely banned.

Jewish law also confirms that maintaining strong borders and preventing immigration of those who endanger us is moral and necessary.

The Torah commands: “Take heed and carefully guard your lives.” (Deuteronomy 4:9 and 4:15). Self-preservation is so important that the Jewish “duty to rescue” is inapplicable if a rescue would substantially endanger the potential rescuer’s own life.

Further, “Ethics of the Fathers” (Pirkei Avot) 1:7 enjoins: “Distance yourself from a bad neighbor; do not connect yourself with a rasha [evildoer].” We are also commanded: “Make a fence for your roof, so you will not place blood in your house if a fallen one falls off of it” (Deuteronomy 22:8) – which is broadly interpreted to require many other safety precautions.

Strong borders are one of those precautions we must take. Before his death, Moses blessed the Jewish people with a prayer for strong borders “sealed like iron and copper” to enable the people to live “securely” into healthy “old age.” (Deuteronomy 33:25, 28.) Similarly, Exodus 23:33 explains: “They [enemies] shall not dwell in your Land….”

Also, under Jewish law, someone with a potential “profit motive” to favor a particular position is in no position to judge. Some refugee resettlement groups, such as HIAS, which have invoked “morality” arguments to promote admitting poorly vetted refugees have been receiving millions of dollars of government grants to resettle refugees.

There is also no moral equivalence between Trump’s executive order and Franklin Delano Roosevelt slamming the doors on Jews trying to escape from Nazi Europe. The 1930s Jews posed no terror threat to the U.S., were in imminent danger of annihilation, and had nowhere else to go. By contrast, immigrants from the seven countries of concern are infiltrated by terrorists, are often already in Turkey or Jordan where there is no imminent danger, and have 50 other Muslim nations that can be pressured to accept them. (ZOA also favors safe zones in the Middle East.)

The Pew Research Center’s Global Attitudes survey (2009) found that over 90% of Muslims in surveyed majority Muslim nations held strongly unfavorable (anti-Semitic) attitudes towards Jews. Bringing more Jew-haters into the U.S., who will join surging vicious anti-Semitic activities on college campuses and the anti-Israel Congressional lobby, is dangerous and immoral.

Moreover, while radical Islamists in the U.S. have primarily targeted Jews, Christians, homosexuals and other minorities, proper immigration precautions benefit every faith – including Muslims. The 3,000 innocent people murdered by radical Islamists on 9-11 included 31 innocent Muslims (and 300-400 innocent Jews).

In sum, supporting President Trump’s efforts to prevent radical Islamists from murdering American citizens and residents of every faith and creed is eminently moral.

Morton A. Klein is the National President of the Zionist Organization of America (ZOA). Elizabeth Berney, Esq. is ZOA’s Director of Special Projects.