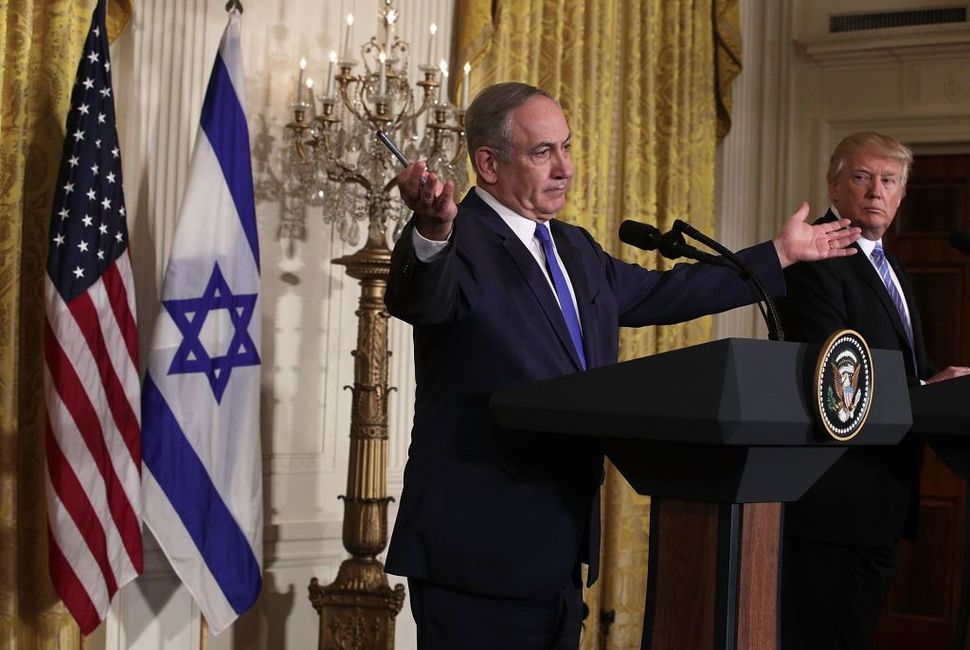 “If there is a will to do so, we know what a settlement looks like,” said the minister, Adel Al-Jubeir. “We just need the political will to do so. And my country stands ready with other Arab countries to work to see how we can promote that.”

The comment was dismissed by most observers as a throwaway line, tucked into a 20-minute speech devoted mainly to the Iranian threat. The press largely ignored it. But it wasn’t just a throwaway. Considering the location, timing and broader context, it looks more like the latest in a series of high-level signals pointing to a new Israeli-Palestinian peace process.

The location: The prestigious annual Munich Security Conference, sometimes dubbed “the Davos of foreign policy.” Jubeir’s brief reference to peace was the most public declaration yet by any senior serving Saudi official of the kingdom’s willingness not merely to accept an Israeli-Palestinian peace pact but to help achieve it.

The timing: just four days after a similar signal from Israel’s Prime Minister Benjamin Netanyahu, issued during his February 15 joint press conference with Donald Trump at the White House. Most observers missed it.

“I believe,” Netanyahu said, “that the great opportunity for peace comes from a regional approach, from involving our newfound Arab partners in the pursuit of a broader peace and peace with the Palestinians.”

If this sounds unlikely, that may be because the Trump-Netanyahu press conference is usually described as the moment when Trump abandoned America’s commitment to a two-state Israeli-Palestinian peace. Trump had said he was “looking at two-state and one-state” and that he “can live with either one.” Liberals, journalists and European leaders howled that Trump had broken a critical American pledge.

But Trump wasn’t rejecting anything. His “either one” indicates agnosticism, not atheism. Besides, it’s impossible to know exactly what Trump was thinking. Maybe he was attempting a neutral-sounding reply on an issue he hadn’t much thought about. Maybe he was trying to smooth the division between his entourage’s pro-settler David Friedman wing and its pragmatist Tillerson-Mattis wing. Assuming he knows there’s a division.

Then again, maybe Trump was trying to help Netanyahu avoid trouble. Before leaving Jerusalem the prime minister was warned by coalition hardliner Naftali Bennett that any mention of Palestinian statehood during the summit with Trump would “cause the earth to shake” by toppling Netanyahu’s government. Perhaps Netanyahu asked Trump to fudge the two-state question.

Whatever Trump had in mind, Netanyahu, speaking next, was subtle. “Rather than deal with labels,” he said, “I want to deal with substance.” This allowed him to discuss Palestinian statehood without saying the words.

He then laid out “the two prerequisites of peace”: first, recognition of Israel as a Jewish state and cessation of anti-Israel incitement; second, “Israel must retain the overriding security control over the entire area west of the Jordan River.”

Can that be a state? He answered that a few weeks earlier, telling a January 22 cabinet meeting that he was willing to permit a Palestinian “state-minus.” Translation: a state with incomplete sovereignty. The Palestinians rejected the idea, Netanyahu said.

Actually, the Palestinians agreed long ago to some limitations on their future sovereignty, including demilitarization, international patrolling of their borders and some intrusive provisions for Israeli security. How much intrusion might be required for Israel’s security provisions to be “overriding” remains to be answered. Netanyahu’s phrasing left room for all that to be negotiated.

As for recognition of Israel as a Jewish state, Netanyahu has been demanding that since he took office in 2009. The Palestinians have refused, saying they’ll recognize Israel as a sovereign neighbor, the same way other nations recognize each other, but not “as” anything special.

That’s now in flux. As Haaretz disclosed in bombshell report on February 20, recognition of Israel as a Jewish state was part of a six-point peace proposal secretly put forward a year ago by then-secretary of state John Kerry. The plan called for a regional conference, together with the Saudis and other Sunni states, to host Israeli-Palestinian talks. Recognition as Jewish state would be part of the outcome.

It now appears that at least one crucial element in Kerry’s plan survived: the regional conference. The conference idea grew out of Israel’s long struggles with the Arab Peace Initiative, a 2002 Saudi proposal offering Israel full peace with its neighbors if it permits a Palestinian state next door. The initiative was approved unanimously by the League of Arab States, but Israel never signed on. Some elements looked to successive Israeli leaders like poison pills: narrow pre-1967 borders, a shared Jerusalem and a dangerous-sounding plan for Palestinian refugees.

Netanyahu, entering office in 2009, faced fierce pressure to accept the initiative. He demanded that the Saudis meet with him in advance to discuss Israel’s reservations. The Saudis insisted Palestinian statehood came first. Deadlock ensued.

During the 2014 Gaza war, centrists in Netanyahu’s cabinet broached a plan to square the circle. They proposed a regional conference, chaired by the Saudis, Egyptians and Americans, to discuss regional crises. A subcommittee would negotiate an Israeli-Palestinian pact, based on the Arab initiative. That way Israel would meet the Saudis not before or after Palestinian negotiations, but simultaneously. The conference idea was taken up that fall by a new group of retired Israeli generals and spymasters, who’ve now grown to include more than half of all Israel’s living ex-generals.

What makes conference backers think Netanyahu is remotely open to the idea? One of the group’s founders, former Mossad chief Shabtai Shavit, today a right-leaning elder statesman of Israel’s defense community, told me recently that he met with Netanyahu that fall of 2014 to discuss options. He came away convinced that Netanyahu’s main fear is a status quo that results in a binational Israeli-Palestinian state, ending the Zionist dream as Netanyahu understands it. The trouble is that with his dark view of Palestinian intentions, he doesn’t see how to move forward.

The importance of the regional conference and the Arab initiative, Shavit told me, is the involvement of the Saudis and Egyptians. They have every reason to want Palestinian agreement because they want to take the issue off the table, so they can join openly with Israel in confronting Iran and ISIS. And, he said, they can guarantee Palestinian compliance in ways America can’t. He recalled the televised signing ceremony in Cairo in 1994 of the Gaza-Jericho agreement between Yitzhak Rabin and Yasser Arafat. When the time came for Arafat to sign, he picked up the pen and — while the world watched on live television — refused to sign.

“You remember what happened then?” Shavit asked. “Mubarak leaned over Arafat’s shoulder and whispered, ‘Sign, ya bin kalb’ [‘you son of a bitch’]. And Arafat signed. Can you imagine an American secretary of state doing that?”

It’s taken Netanyahu a long time, but now, listening to him and Jubeir last week, it appears Israelis and Saudis might finally be on the same page — or at least reading from the same book.

What’s changed to make this possible? Three main factors. First, the Saudis seem ready to meet Netanyahu halfway, no longer waiting to the end to sit down with Israel but joining the process out front — and announcing it now to the world community. Second, the Obama administration has been replaced by a Republican team that Netanyahu trusts to have his back. The Saudis, too, are happy to see a new president who is, Jubeir said in Munich, “pragmatic and practical, a businessman, a problem-solver” and “not an ideologue.”

And the third factor? Netanyahu’s fear of prison. Israel’s national police are expected to recommend in a month or so that he be indicted in as many as three separate corruption cases. This has two opposite impacts. On one hand, his wiggle room on peace is limited right now because he’ll need his coalition’s backing if he’s charged. Hence his avoiding of “labels.” Looking further ahead, though, conventional wisdom on the Israeli right has it that prime ministers facing indictment tack leftward to please the supposedly liberal judges, prosecutors and reporters. Think of lifelong Likudniks Ariel Sharon leaving Gaza and Ehud Olmert negotiating with Mahmoud Abbas.

It doesn’t always work, as inmate Olmert can attest, but Netanyahu may be thinking it’s worth a shot.