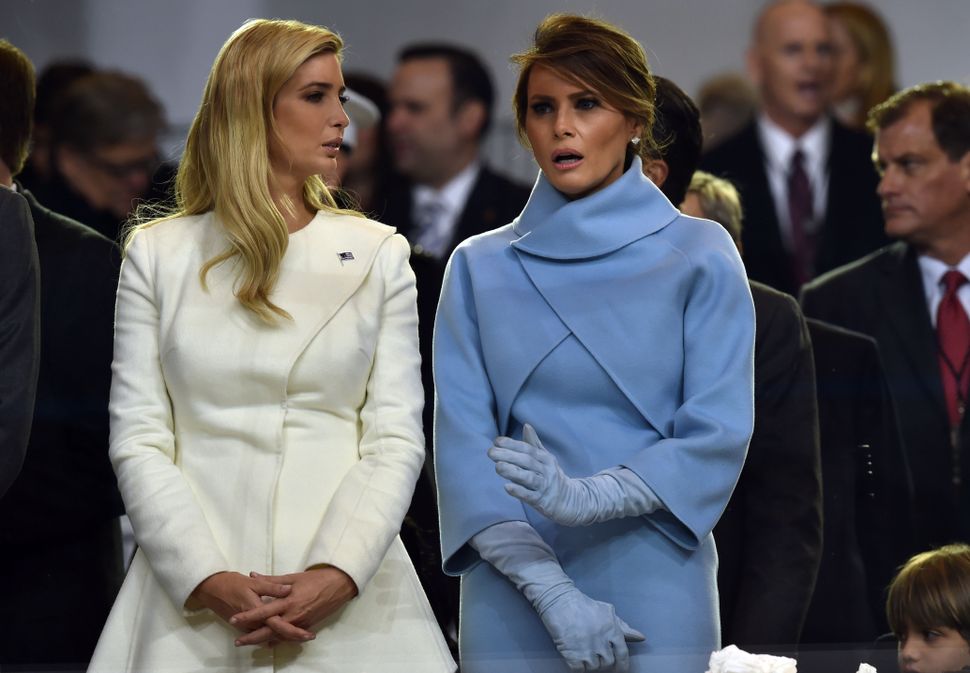 Since the election, Democrats have been told what we and the Hillary campaign did, and keep doing, wrong. “Identity politics” was the issue, some insisted, as if supporting civil rights were as divisive and deplorable as white supremacy. Stop marching in silly pink hats and dropping F-bombs, Madonna and all of you, others complained — it’s counterproductive and rude (code for “unladylike” if ever there was). As for being so angry and mean, that’s burning bridges and it alienates borderline Trump supporters, one of whom lamented in a recent New York Times Sunday Review piece that Meryl Streep’s denunciation of the president had not only upset her but also infringed on her enjoyment of movies. Another expressed bewilderment that supporting Trump made it harder for him to get dates. Thus, we lost them.

The fantasy that protests must bring the nation together, the exhortation to contort our opposition so that it is reparative and friendly, should remind us of the long-abused wife’s Stockholm-syndrome-fueled belief that her spouse will change, if only she does the right things. It is self-hating and hobbling and it is a potentially lethal distraction.

Women: The Trump regime is coming for you.

They are coming for the services that help you carry a baby healthily to term if you are a poor woman or a woman of color “and so at higher risk to suffer complications like gestational diabetes, preterm birth, and even infant mortality,” as expert, Dr. Robin G. Nelson, told me. With end runs around the Constitution, they are coming for your right to choose. And they are coming for the hearts and minds of your sons and daughters by coming for your feminism. Their weapon will be an updated version of “kinder, Küche, Kirche,” the German jingle and ideology hijacked by Nazis that lauded Aryan/“master race” women who had babies, cooked and went to church. This is quite literally a home invasion.

Ivanka and Melania Trump are fake feminists for Caligula times.

That’s why, on January 25, Ivanka Trump posted to Instagram a video of her baby crawling in the White House, captioning it, “There were so many incredible milestones this past weekend!” The White House, as the Instagram post with Camelot pretenses that garnered more than 2 million views implies, is a cozy home of children and relationships, and only the heartless could fail to root for this new administration taking its first steps. 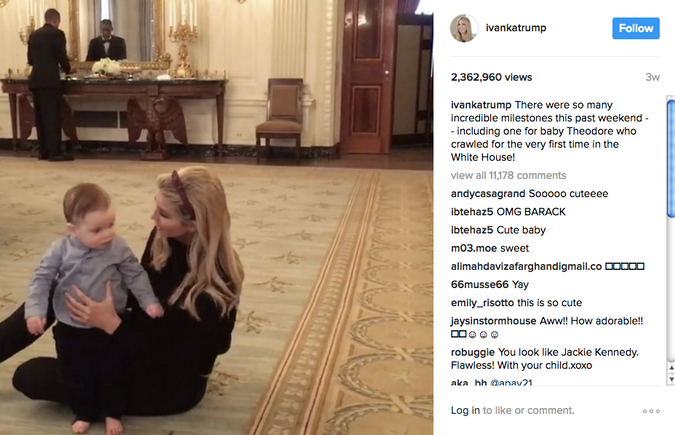 The Instagram post does more. It conflates a cute tot’s breakthrough with the inauguration of a man who habitually degrades women, and then links it to the remarkable protests, millions strong, of his inauguration a day later. It’s all the same! That’s what Ivanka Trump’s post suggests. We’re all the same! Milestones!

Nearly three weeks later, at a private party, reporter Jacob Bernstein called Melania Trump a hooker, prompting a model to out him to the Twitterverse. After Bernstein’s bosses warned him off, he bleated his contrition, and FLOTUS tweeted, “Applause to all women around the world who speak up, stand up and support other women! @redactedmodelname #PowerofEveryWoman #PowerOfTheFirstLady” Defending women on the wrong side of power, and sticking up for a woman who stands next to the most powerful man on earth as he attacks women — it’s all the same. We’re all the same! #Womanpower!” 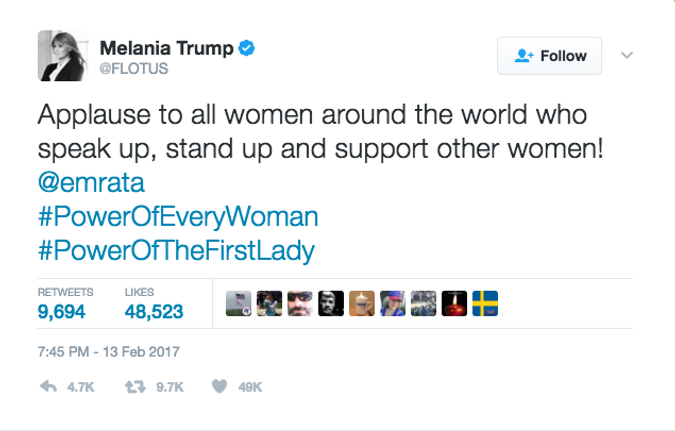 The hypocrisy of the first lady and the first daughter — let’s call them the colluders in chief — is so shameless, so blatantly out in the bright white light, as to almost escape notice. These are women who have acted as mouthpieces for Their Man’s racist birtherism, insisted on his support of and respect for women in the face of his bragging about grabbing them by the pussy, and otherwise provided cover for his “multiple bias disorder,” all while embodying a clitoridectomized, decorous and decorative femininity after eight years of Shonda Rhimes protagonists, a first lady who wore her blackness proudly and meant it, and Hillary Clinton in pantsuits. It is jarring. It is disappointing. But is it dire? We are pulled in many directions by many urgencies, including rampant anti-Semitism and whether Putin serves as our shadow president. What does it matter, really, that Ivanka and Melania Trump are fake feminists for Caligula times?

As their social media moments demonstrate, the very definitions of feminism, family and woman are up for grabs. And we must grab them back. Like authoritarian propagandists everywhere, those of the Trump administration will not stop at the obvious. To achieve their ends, they will pedal a whitewashed, mostly white and compliant version of femininity as good. All the rest will be, already is, bad. Fall on the wrong side of that equation at your peril. You will be taught a lesson.

The lesson was imparted to the Rosie O’Donnells and Megyn Kellys, to the #blacklivesmatter founders and all the #blacklivesmatter activists, the Alicia Garzas and Opal Tometis and Patrisse Cullorses — big, visible, outspoken women with large platforms and noisy voices and, in the case of some, ambitious intersectional agendas that upset the order of things. They have been demonized and demeaned as dogs and slobs bleeding from wherever, and smeared as un-American. They have been blamed for the very violence they critique.

President Trump’s lesson was imparted to an 18-year-old female college student who told the candidate at a 2015 New Hampshire town hall, “I don’t believe you’re a friend to women.” Trump tweeted to his millions of followers that she was “an arrogant young woman.” He wrongfully accused her of being a plant, and allowed staffers to blast out her social media accounts. Trump supporters then sent rape threats and death threats, and altered an image of her face to make it appear covered in semen.

The lesson was also imparted to American Urban Radio Networks journalist April Ryan, who has covered the White House for two decades, when Omarosa Manigault, unhappy with Ryan’s writing that she deemed critical of President Trump, attempted to physically intimidate her in a way that a witness said had warranted the intervention of the Secret Service. Manigault also taunted Ryan that the Trump administration had dossiers on her and on several other African-American reporters. Later, when Ryan asked Trump at a press conference whether he would meet with the Congressional Black Caucus, he asked if she’d organize the meeting for him. Another lesson, this time in Trumpian civics: Being a lauded reporter doesn’t mean we can’t bully you, demote you to personal assistant and reduce you to your blackness.

Trump doesn’t only bully and set out to destroy and devalue vulnerable women. His lesson was imparted to every single woman in the nation when he went after a powerful woman, the one who threatened him most of all. The belittling and putting her in her place was accomplished with criticisms like, “If she can’t satisfy her husband, what makes her think she satisfy America?” and threats to “Lock her up!” Then came the combined forces of the FBI, the Republican Party, gerrymandering and Vladimir Putin’s army of online trolls. The message to Clinton was a message to us all: Line up behind me or I will annihilate you.

Melania Trump, embroiled in her own drama of righteousness and lawsuits about words not unlike what her husband — and she herself, by association — heaped on her husband’s opponent, is concerned about sexism and bullying.

Ivanka Trump, who, like her stepmother, has proved again and again that she is Donald Trump, is a friend of women.

The assault against not just facts but also meaning, including the meaning of feminism, is well underway. And every woman is not your friend. It’s time to impart some lessons of our own. Let’s not make the mistake of doing it politely.

Wednesday Martin is the author of the No. 1 New York Times best-seller “Primates of Park Avenue” (Simon & Schuster, 2015) and “Stepmonster” (Houghton Mifflin Harcourt, 2009). Her work has appeared in The New York Times, The Atlantic and Refinery29, among other publications.