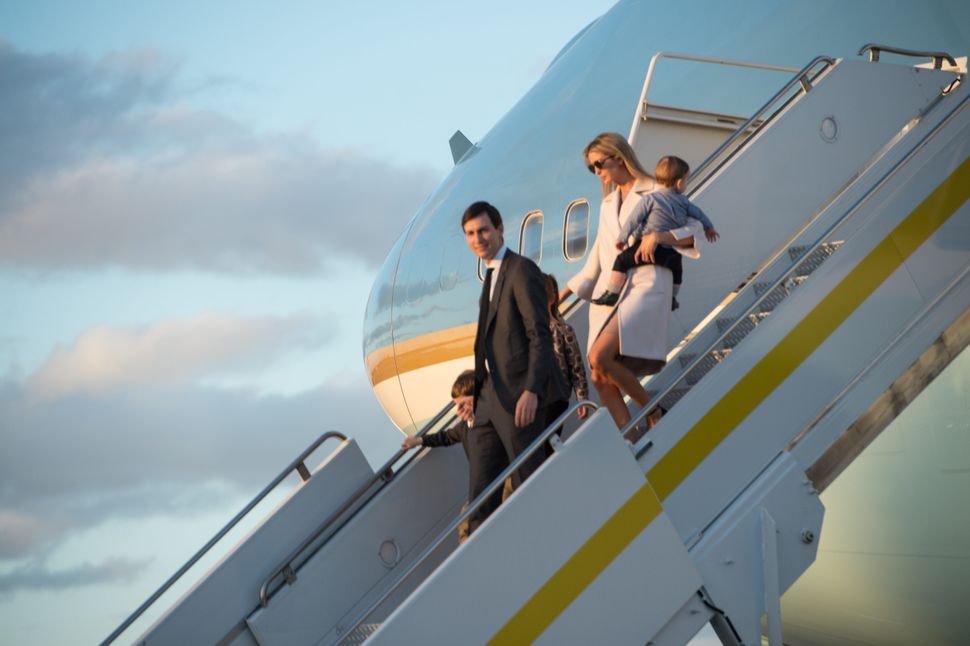 The Washingtonian would like you to know that they’ve dug up a “kosher expert” who believes Jared Kushner and Ivanka Trump don’t keep Kosher.

Reporter Jessica Sidman writes, “Based on their dining destinations, it’s safe to say that the couple isn’t strictly observant.” The magazine even went to the trouble to call several of the restaurants the couple has recently patronized to inquire about what they ordered (unsurprisingly, the restaurants decided to guard their customers’ privacy). It’s unclear who died and made the Washingtonian the Kosher police, or God, for that matter.

The tone on Yahoo news isn’t much different: “The $5,000 Carolina Herrera dress that Ivanka is wearing in the photo is a shoulder-baring style that’s counter to the standards of modesty to which Orthodox practitioners generally adhere. (Ivanka also wore a one-shouldered jumpsuit to the third presidential debate back in October, so it’s clearly a style with which she is comfortable.)”

As anyone who has a passing familiarity with a Modern Orthodox community knows, there are as many standards of observance as there are Jews. Some married women cover their hair; other women wear skirts but refrain from donning pants; still others only cover their hair but wear pants and vice versa. There are Modern Orthodox Jewish families who only dine in Kosher restaurants, families who will “eat dairy out” and avoid meat and shellfish and pork at non-Kosher restaurants, families who relax their Kosher standards when they’re traveling, and any other number of permutations.

Aside from her manner of dress, it’s impossible to know what standards Ivanka Trump personally holds to in her personal observance of Jewish law. The key word in the previous sentence is “personal.” Despite the fact that Trump is now first-daughter, and in many ways is acting as a White House advisor and First Lady all in one, her religious observance is still just that: personal.

If Ivanka Trump portrays herself as an Orthodox Jew and legitimized her father’s campaign with her Jewishness, isn’t her own observance of Judaism fair game? A look at Ivanks’s own discussion of her faith is minimal; and despite going through an Orthodox conversion, she doesn’t affix a particular label to her brand of observance. Fiercely private, the First Daughter grants few interviews, and the most she’s ever said about her religious observance came in a Vogue Magazine interview in early 2015, before her father’s campaign was taken seriously. She told Vogue of her faith,

“I always shied away from it being a public conversation because it’s such a personal thing. We’re pretty observant, more than some, less than others. I just feel like it’s such an intimate thing for us. It’s been such a great life decision for me. I am very modern, but I’m also a very traditional person, and I think that’s an interesting juxtaposition in how I was raised as well. I really find that with Judaism, it creates an amazing blueprint for family connectivity.”

On the campaign trail, Ivanka was also circumspect about her faith. When a kippah-clad audience member at a town hall on CNN in the spring of 2016 asked about her conversion, Ivanka began her answer by saying “It’s such a personal decision and I tend not to talk about it in a public forum.” She later went on to praise her father’s open-minded response to her decision; though her answer was considerably shorter and more terse than others she gave that night on issues relating to women and her family life.

While it’s exciting that Ivanka Trump and Jared Kushner have for the first time put faces to Orthodox Judaism for average Americans, that unfortunately has had a downside for her family. A side effect of this exposure is that their observance is now apparently fodder for mainstream journalists with little or no experience covering the nuances of Judaism — until this point. Despite the fact that respected mainstream media outlets decided the Church-going habits of the Obama family weren’t newsworthy, taking swipes at the personal religious observance of a member of the First Family is now apparently acceptable; as long as their last name is Trump.

In “Pirkei Avot” (Ethics of the Fathers), Hillel the Elder says, “Do not judge your fellow man until you reach his place.” Which is to say, before you judge a man, walk a mile in their shoes. Few of us could manage such a feat in Ivanka Trump’s pumps; and while her actions and words deserves scrutiny given her position as a public figure, judging her personal religious observance is beyond all of our pay grades; or should be, at least.