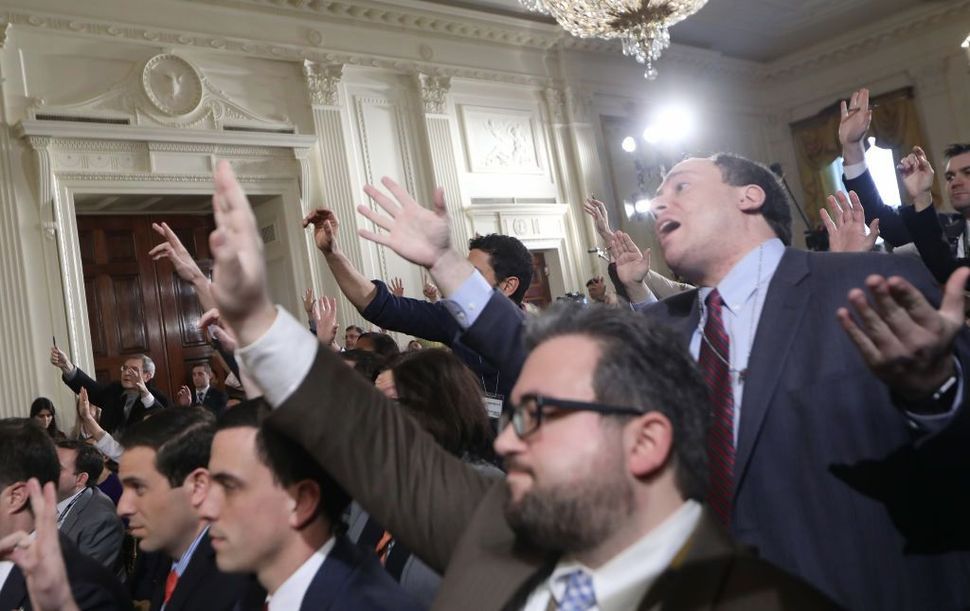 Long before I thought of entering the rabbinate, I dreamed of becoming a journalist.

I served as a reporter on my high school newspaper, and when I was in 11th grade, the local school board threatened to close our high school. I remember my heart pounding when I had to pick up the phone to call a member of the board for an interview. I remember how powerful it felt to ask her to explain to me and my fellow students why she supported closing the school we loved.

I spent five weeks that summer at Northwestern University’s National High School Institute’s journalism workshop, where my teachers pounded into our heads the importance of fair, objective, honest reporting: “If your mother says she loves you,” they urged us, “check it out!”

In America, the freedom of the press emerged to facilitate opportunities for individuals to challenge the government. Most of the early newspapers in the American colonies were partisan outlets for speaking out against the British monarchy. As America grew, political parties owned most newspapers, which promoted the party’s platform and ridiculed the opposition.

But by the turn of the 20th Century, with advances in technology and the advent of the Progressive Era, publishers realized they could profit from advertising and expand their subscriber base by becoming independent of the political parties.

Journalists began to report on the major issues of the day, shedding light on societal ills. Upton Sinclair exposed the horrendous conditions in Chicago’s meat-packing plants. Murrey Marder of the Washington Post stood up to Joseph McCarthy, disproving accusations by the red-baiting Senator that soldiers at Fort Monmouth engaged in espionage. Woodward and Bernstein, of course, revealed the Nixon administration’s corruption.

At times, newspapers and television news have also abused the public’s trust, by libeling individuals, exposing salacious details of celebrities’ private lives, and reporting half-truths. I subscribed to Newsweek while living in Jerusalem during the late 1980s, and wondered how the magazine’s stories could be believed when the Israel I experienced every day was so different from what they told their readers. I have personally felt the sting of being misquoted by reporters.

But the repeated attacks on the media by the President of the United States are dangerous, and represents an attack on America itself. His recent statement that the mainstream news media is the enemy of the American people recalls the attacks on independent journalism by despotic totalitarian regimes. As Amanda Erickson of the Washington Post chronicled, dictators from Lenin and Stalin, to Hitler and Mao, used the moniker “enemy of the people” to persecute their political enemies, especially those who dared to challenge the ideology and rule of the State.

Journalists are often tasked with telling difficult, uncomfortable truths, whether it was Seymour Hersh detailing the My-Lai massacre, or The Spotlight team at the Boston Globe uncovering the sexual abuse perpetrated by local Catholic priests. The stories reporters tell may anger us or confound us with disbelief. We may fundamentally disagree with a journalist’s analysis or conclusions, and we may take great issue with what we read on the editorial pages of national and local newspapers.

But there is great value in being forced to consider that which runs counter to what we think we know. The rabbis of the Talmud teach us that debate and argument can be great forces for good: “Any dispute which is for the sake of Heaven will ultimately endure, and one which is not for the sake of Heaven will not ultimately endure (Avot 5:20)” The hallmark of a great society is one that embraces dialogue and difference, one that promotes a robust exchange of ideas and that demands strong thinking grounded in verifiable fact and powerful, sensitive, thoughtful analysis.

Part of the reason I decided to become a rabbi was due to my love for journalism. Journalists learn and teach and strive to help their readers to be better informed and more responsible citizens. It is that same passion for learning and teaching and helping to expand the wisdom and understanding of my community that led me to the rabbinate.

Mister President, the news media is the ally of the American people, not its enemy. It is only through dogged reporting and persistent questioning that the American people can hold accountable those in positions of power. It is what truly makes America great.

Daniel Levin is the author of Proof of Life: Twenty Days on the Hunt for a Missing Person in the Middle East.