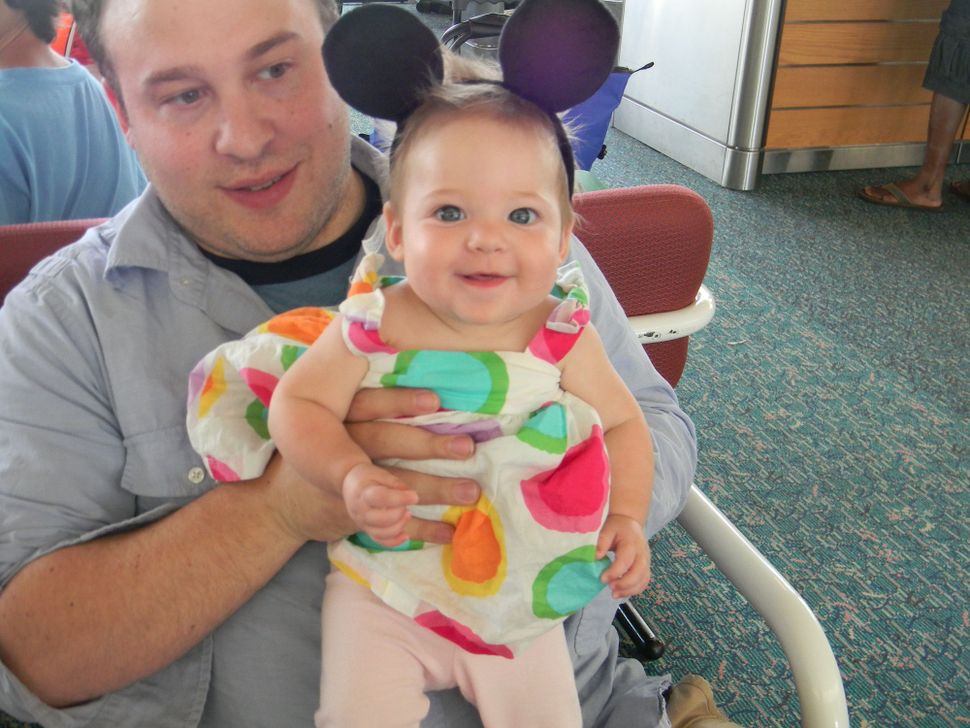 Seth Galena with his daughter Ayelet._ Image by Courtesy of Seth Galena

When news broke earlier this week about the death of Adam Krief, a 31-year-old Jewish father of three who had been publicly battling blood cancer, most reports mentioned how Krief’s outreach included posts and tweets from celebrities. JTA’s story about his loss began “Adam Krief, a Jewish cancer patient whose search for a bone marrow donor captured the attention of social media and celebrities including Kim Kardashian, Mayim Bialik and Jason Biggs, has died.”

Krief’s story did indeed capture the hearts of celebrities, but he also captivated an entire Jewish community, which rallied behind the family to secure a potentially life-saving bone marrow match, which came through in early December of last year. Just on Instagram, the post announcing a match had been found was viewed more than 14,000 times. It wasn’t the celebrity connection alone which attracted followers to the Kriefs’ story, but the family’s openness about Krief’s diagnosis and desperate search for a donor.

The reaction to the Krief’s story recalled another family who experienced an extraordinary medical event and then a tragic loss. Seth Galena and Hindy Poupko Galena buried their toddler daughter Ayelet five years ago after a long, public battle with a rare bone marrow disease. Like Adam Krief, Ayelet died just a few short months after obtaining a bone marrow transplant, which was found thanks to a massive search effort throughout the Jewish community.

What do the lives and deaths of Adam and Ayelet teach us about the Jewish community? For all of our inter-religious sniping and fighting, for as difficult as it can be and is to be Jewish in 2017, their stories remind us of what the American Jewish community is really made of.

“Both of these stories,” Ayelet’s father Seth told the Forward, “captured the essence of what the Jewish community is all about. It’s not about the tragedy but how we respond to this tragedy. [With Ayelet’s illness and death] saw what our community is capable of. I heard there were 2,000 people at Adam Krief’s funeral in Los Angeles, and the Krief family will likely come to know even more what their community is capable of in the coming days, weeks and months.”

Seth speaks from experience. After Ayelet’s death, a woman in Borough Park neighborhood sent the Upper West Side family a challah every Shabbat the first year after her death; a playground in Israel and a wing of the Ronald McDonald House they stayed in during Ayelet’s illness in Connecticut were named after her; in addition, several families even decided to name their own children after the toddler.

After a tragedy like Adam’s death, how can the Jewish community come together and honor a man most of his online fans have never met? Given their shared experience as the public survivors after a tragic loss, Seth Galena had some meaningful insight. He told the Forward “First and foremost it’s an obligation people should get swabbed for the bone marrow registry. It meant a lot when people did small acts of kindness in Ayelet’s memory. We don’t need death to remind us be good and do kindness, but it’s the little things that truly do help pay it forward and help remember these people for a blessing.”

Five years later, the Galenas know that bone marrow registration drives directly tied to their daughter led to almost 150 matches and over 20 transplants. Two dozen ill patients who might never have found a life-saving bone marrow donor were matched because of people who agreed to get swabbed to find Ayelet a match.

Already since the campaign began to bolster the registry, 11 matches have been found for others waiting on for a bone marrow donor thanks to Adam Krief. A fundraiser organized by the family to help with processing costs of bone marrow swab kits will enable over 5,000 international kits to be processed at the cost of more than $250,000.

The most powerful enduring legacy of a man like Adam Krief will, of course, be the wife and children he left behind. It’s already clear that another lasting effect of his life and illness will be bringing together the Jewish community to save the lives of countless others.