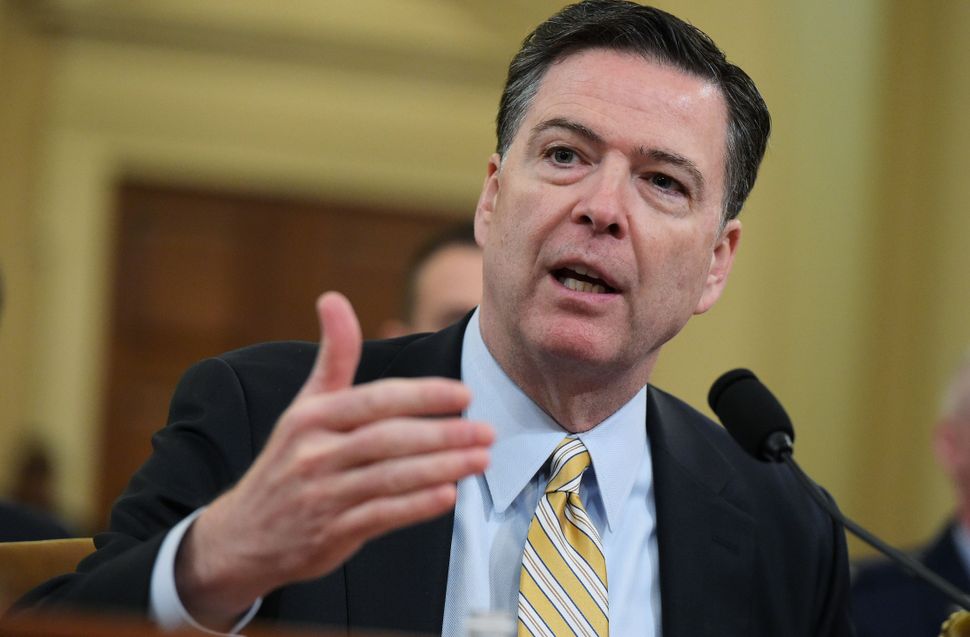 There was a certain ironic justice in FBI Director James Comey’s sensational testimony March 20 before the House Intelligence Committee.

Comey testified that the bureau is investigating “whether there was any coordination” between Donald Trump’s presidential campaign and “the Russian government’s efforts to interfere in last year’s election.” In other words, the FBI believes it has sufficient evidence to justify opening a formal investigation into whether the sitting president or his team colluded with an unfriendly power seeking to undermine an American election and make him president. It is, Comey specified, a counterintelligence investigation. That means there’s substantive suspicion of espionage.

Comey’s disclosure is historic. Nothing like this has ever happened before in American governance. It’s obviously a serious blow to the credibility of the Trump White House. The FBI doesn’t assign teams of agents to pursue something unless there’s plausible evidence that something happened.

Here’s the irony: Comey may be more responsible than any other individual for installing the president he’s now putting under a cloud. Remember, Comey publicly reopened the Clinton email inquisition on October 28, just 11 days before the election, in a letter to Congress announcing a new trove of unread emails. The emails quickly proved to be duds, but it was too late for Clinton to recover. It’s widely believed, including by Clinton herself, that Comey’s last-minute email stunt gave Trump his unexpected turnaround victory.

Now Comey tells us, two months into the Trump presidency, that Russia was actively trying to sabotage our election in hopes of obtaining — well, precisely what they obtained, thanks at least partly to Comey. And that FBI counterintelligence is now exploring whether Trump or his team were in on the plot. That is, the bureau considers it an open question whether there’s a Russian agent sitting in the Oval Office.

It gets worse. It turns out that the FBI began suspecting a Russian hack of Democratic computers in the fall of 2015. The bureau told the Democrats about it in March 2016. The feds believed Russia was stealing embarrassing Democratic emails and dumping them raw on an unsuspecting American public, in a bid to tilt our election. But the public wasn’t to be told it was being manipulated. The FBI doesn’t, you know, discuss its investigations unless it’s ready to indict someone.

Not until mid-August did the bureau make its Russia suspicions public, after months of incendiary Russian data dumps.

In the interim, Comey broke his own rule in a July 5 press conference where he publicly discussed an investigation — into Clinton’s emails. He wanted us to know that nobody would be indicted. The FBI, he announced in almost apologetic tones, “cannot find a case that would support bringing criminal charges.” Not that Clinton behaved properly, he hastened to add. She had, in Comey’s view, behaved with “extreme carelessness.” In fact, in “we assess it is possible that hostile actors gained access to Secretary Clinton’s personal e-mail account.”

There wasn’t a lick of evidence of anyone actually hacking Clinton’s emails. Comey just wanted to throw that in, in case you missed the danger in Clinton’s “carelessness.” And yet, incredibly, the bureau had real evidence that a different email account had been hacked by a very unfriendly actor. The bureau was treating this as an act of espionage in which Clinton’s rival, Trump, just might be complicit. But that information, which could only help Clinton, was kept quiet until damage had been done.

Now, two months into Trump’s presidency, the director has dealt the president what could be a crippling blow by telling Congress — and a national television audience — that our new president entered the White House as a beneficiary, and perhaps a knowing ally, of Russian sabotage.

At this point, we should stop to address one of the many elephants in the room: Did the Russian hacking attack have an impact on the election outcome? That is, how much should we care about this electronic invasion of our democracy?

For starters, let’s stipulate that there’s no evidence Election Day computers were invaded. But did it sway voters? We’re talking about a handful. Trump won by just 78,000 votes — roughly 44,000 in Pennsylvania, 24,000 in Michigan and 10,000 in Wisconsin. That’s a sliver in an overall electorate of some 125 million. Some of those 78,000 liked Trump. Some disliked Clinton. Some were swayed by Comey’s letter. Is it possible that some were swayed by the Democratic infighting unearthed by the Russians? Yes. After months of embarrassing headlines, it’s impossible that nobody was swayed.

The worst part is that any concrete response — to find out what happened and do something about it — requires action by the Republicans controlling Congress. So far they’re showing no inclination to rise above party loyalty and act as Americans. In public debate and even in the formal House Intelligence Committee hearing, Republicans try to dismiss the facts, change the subject to probing the leakers, or demand that Clinton be investigated too. She must be guilty, of something.

There’s a startling pattern here. The only president ever forced from office was Republican Richard Nixon, following the Watergate scandal. Since Nixon, we’ve seen a Republican administration caught selling weapons to Iran to finance an illegal war in Central America; another Republican administration that lied its way into a disastrous, decade-long war in Iraq, a war that cost 4,000 American lives and critically destabilized the Middle East but was never seriously investigated. And now this.

Naturally, the lesson Republicans learn is that they’re persecuted. In retaliation, they launch repeated investigations of Democrats, usually unrelated to how the country is governed but rather to personal behavior, real or imagined. A failed real estate deal in Whitewater. Sexual misbehavior in the Lewinsky scandal (which somehow led to America’s second-ever impeachment trial).

Their biggest catch in the national security realm: the Benghazi tragedy, with its loss of four American lives. But seven congressional investigations couldn’t find any actionable wrongdoing. You might count the Clinton email server, which could have caused security damage but apparently didn’t.

The Republicans are currently up in arms about the invasion of our southern border by hordes of potential nannies and farmhands. Faced with actual evidence that we were invaded electronically by an unfriendly power that wanted and got their guy in the White House, they hem and haw and try to change the subject. Maybe they should be investigating themselves.