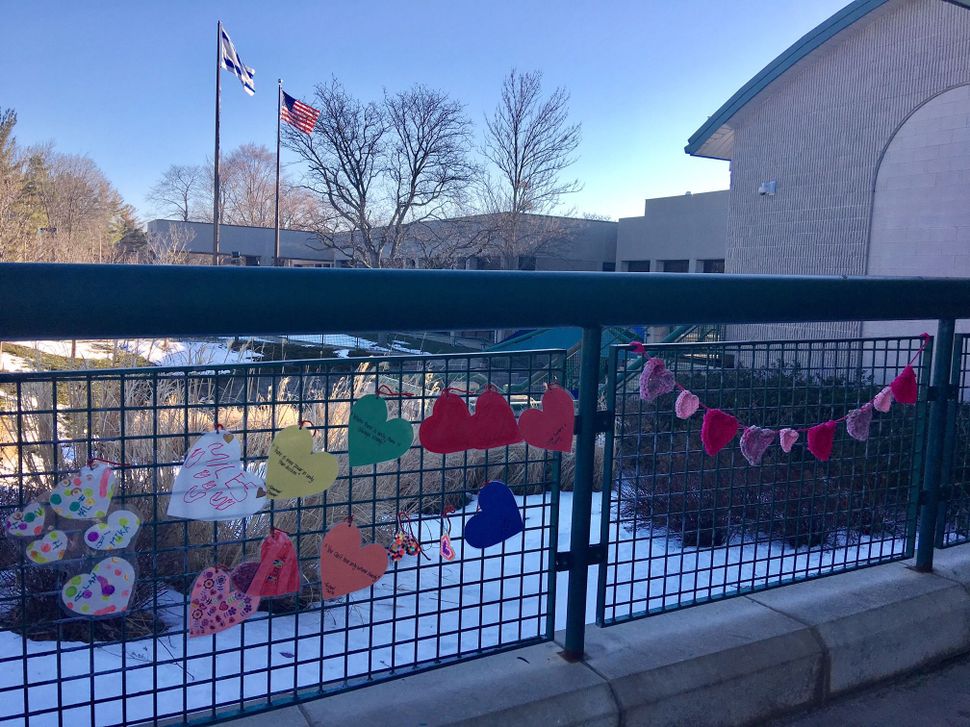 Hearts outside of JCC in Rochester, New York.

When the child care center at our JCC in Rochester, New York, received a bomb threat on March 7, I wrote a piece for USA Today chronicling my fear, helplessness and anger that someone would target children.

But now I also feel sick upon learning that the suspect arrested for allegedly making these threats is Israeli, American and Jewish. Of course I know from a rational perspective that being Jewish encompasses a range of diverse experiences – including experiences borne of hate and motivated by malice.

But from an emotional perspective, I feel like I’ve just been sucker punched.

After all, a Jewish cemetery in Rochester was vandalized just days before the first JCC bomb threat here. The two back-to-back events made me feel like “they” hit us where we live – and where we are laid to rest.

Will people take seriously future anti-Semitic threats, or will our concerns be dismissed if it’s another Jew who is responsible for them?

My gut reaction upon reading the news alert about today’s arrest was straight out of Jewish central casting, a version of “What will the goyim think of us now?” The facts are this: A 19-year-old Jewish man, led by God-knows-what motivating factor and/or unbalanced wellbeing, wrought fear and chaos to Jewish centers across our country. And it’s not just Jews who’ve been impacted. We all know of the non-Jewish teachers, students and staff who have had to live with the terror of these threats as well. In fact, so many of them have led our children to safety and comforted them emotionally during evacuations. My second reaction was this concern: Will people take seriously future anti-Semitic threats, or will our concerns be dismissed if it’s another Jew who is responsible for them?

And then I feel sick for another reason. Would it have been “better,” perhaps more palatable, if law enforcement arrested a non-Jew, and that our assumptions played out according to the playbook – that it was a white supremacist responsible for these crimes? The fact that this is even a question for consideration leaves me breathless. Of course it would not have been better. It’s a Faustian bargain. It’s like being forced to choose between two different types of “awfuls” that have different repercussions.

And that’s when I realize my “sickness” has a name: Shame.

When our JCC in Rochester received its first of two threats I felt driven to do something – to create love when we’ve been the target of hate. So I picked up my crochet hooks and made hearts, which I strung outside the children’s center in response to the March 7 threat.

But that wasn’t enough because I didn’t want this small act of “craftivism” to be about me. I wanted the kids to get involved too so I asked JCC parents to make hearts with their children. Boxes of hearts poured into the front desk. And this week we hung dozens outside the center, and more inside the lobby at the daycare facility. This morning, upon dropping off my pre-schooler in her classroom, I hung two more multicolored hearts outside the building. The goal was to show that the center, its babes, teachers and staff are loved.

But I can’t shake this shame that cuts to the bone. When I pick up my daughter from school this afternoon I will walk by the hearts – made with such care and goodwill – and know that I was moved to craftivism because of the unconscionable actions of an Israeli-Jewish American. The hearts were meant to reflect our love for children in the face of malice. Now I want to tear them down, since they are a cruel reminder that hate can come from within.

A few minutes before sitting down to write this, I received a phone call from my next-door neighbor, a Catholic-raised woman who embodies love, kindness and generosity of soul and spirit. She wanted me to know that they caught the suspect allegedly responsible for the threats to JCCs, and that they arrested him in Israel.

“He’s Jewish,” I blurted out, distraught.

“I thought you’d be happy that they caught him – that hopefully it’s over,” she said, offering a more optimistic perspective.

When I told her that I’m distressed to learn that a fellow Jew would commit such crimes, she recounted a story: When her teenaged son died suddenly and unexpectedly about four decades ago, two Jewish doctors in the office where she worked planted trees in his honor – in Israel.

So what will the goyim think? They’ll think we’re all in this together. We are connected in unexpected ways that are both painful and powerful.

The hearts at my JCC will stay up.

Hinda Mandell, Ph.D., is an assistant professor in the School of Communication at RIT in Rochester, New York.