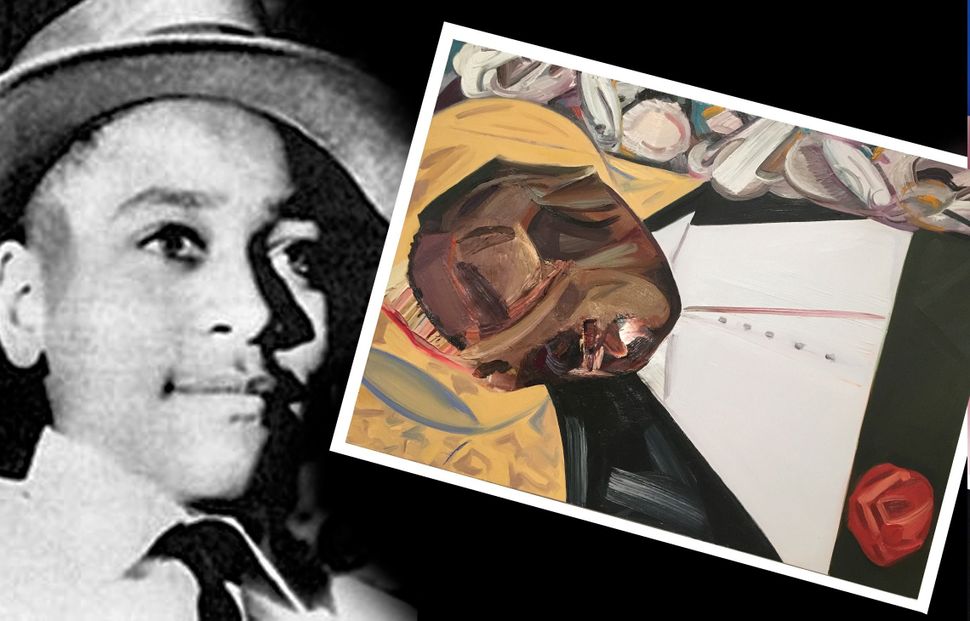 The controversy over “cultural appropriation,” which in recent years has dogged everything from pop music videos to Halloween costumes to museum exhibits, is now having a particularly ugly episode at the Whitney Biennial, the renowned exhibition of American art at New York’s Whitney Museum.

This time, the backlash targets a painting by Brooklyn artist Dana Schutz, “Open Casket,” depicting the body of Emmett Till, the 14-year-old African-American lynched in Mississippi in 1955 over an accusation of flirting with a white woman. And it’s a scary illustration of the authoritarianism, intolerance, and hypocrisy of the anti-“appropriation” crusade.

After the Biennial opened earlier this month, an artist named Hannah Black posted a letter demanding that “Open Casket” be not only removed but also destroyed. The reason: Schutz is white. According to Black, who openly dismisses “white free speech and white creative freedom” as founded on oppression, “the subject matter is not Schutz’s,” and her work is “appropriation” and exploitation of black culture and black suffering.

The letter grew into a Facebook petition, signed by more than 30 people (more signatories were scrubbed because they were non-black) before Black took it down for unknown reasons. While the Whitney has said that “Open Casket” will stay, Black has found plenty of support in the art world. On Twitter, some have called for Schutz’s painting to be burned. New Republic writers Josephine Livingstone and Lovia Gyarkye have charged that it “erases the story of the victim and his family” — with no argument to back up this claim, evidently meant to be an article of faith.

Schutz herself told Artnet that she saw “Open Casket” as her response to a resurgence of hate and racism in America — and to the grief and anger of Till’s mother, Mamie Till Mobley. She has also said that she does not intend to sell the painting, despite Black’s deplorable accusation that she is using black pain for “profit and fun.”

Of course, creative freedom is not an exemption from criticism, and there is nothing wrong with criticizing an author’s or artist’s treatment of issues related to race, ethnicity or religion (for instance, use of racial or cultural stereotypes, or sugarcoating oppression). But there’s a big difference between criticism and public shaming, let alone calls for the destruction of art. And there’s a big difference between criticizing the treatment of a subject and saying that a subject should be off-limits to some creators because of their identity.

Take the outcry a couple of years ago over the romance novel “For Such a Time” by Kate Breslin, set during the Holocaust and featuring a love story between a Jewish secretary who passes as a gentile and her handsome Nazi boss who runs a concentration camp. The word “problematic” has been made meaningless by overuse, but it surely applies here: casting an SS officer as a dark-but-redeemable romantic hero is tacky at best, especially when the heroine is literally at his mercy. Throw in the fact that “For Such a Time” is an “inspirational” romance in which the happy ending includes embracing Christianity, and it’s easy to understand why many were aghast when the book was nominated for a couple of Romance Writers Association awards (though, thankfully, no one demanded book-burnings).

Breslin deserved literary criticism. But it would be quite a leap to tell non-Jewish writers, filmmakers and artists to stay away from the Holocaust. Should the film “Life Is Beautiful,” made by the Italian Catholic Roberto Benigni, be trashed as exploitation of Jewish suffering? Should non-Jewish author Lois Lowry be stripped of her 1990 National Jewish Book Award for Children’s Literature for the Holocaust novel “Number the Stars”?

As a Jewish teenager in the Soviet Union, where official history systematically downplayed the Nazi slaughter of Jews, the first work I read that dealt explicitly with the Nazis’ Jewish victims was written by a non-Jewish Russian author: Yevgeny Yevtushenko’s “The Bratsk Station,” a cycle of poems in which workers at a Siberian power plant tell their stories—among them a Jewish engineer haunted by his past as a Holocaust survivor. The poem moves me to this day, and it could never have occurred to me then or now that Yevtushenko had no right to the voice of a Jewish character.

Even in the controversy over “For Such a Time,” one objection struck me as specious: that Breslin had “appropriated” a Jewish narrative by adapting the biblical tale of Esther, the Jewish consort of a Persian king who uses her position to save her people. Would it be wrong for a non-Jewish writer or director to write a novel or make a film about Esther — or to transplant her story to, say, a fantasy setting? Surely not. For that matter, if paintings and sculptures on subjects borrowed from Jewish history and scripture were deemed unacceptable, most art museums would be left half-empty.

On ABC’s all-female talk show The View, the African-American host, Sunny Hostin — who, along with black actress and comedienne Whoopi Goldberg, strongly condemned the attacks on “Open Casket” — asserted that the painting’s foes misunderstand what cultural appropriation is. But I’m not sure there is such a thing as a “good” critique of cultural appropriation.

Certainly, there have been valid and compelling critiques of literal cultural plunder by colonial powers, of stereotyped or exoticized depictions of minorities and non-Westerners in Western art and discourse, and of historical discrimination against nonwhite artists. But “cultural appropriation” in the sense of supposedly illicit use of themes, styles, or practices from cultures not one’s own — or, at least, from the cultures of less powerful groups — is a pseudo-offense based on the pernicious idea of tribal ownership of culture.

Cultures mix and crossbreed; they always have, sometimes via conquest and pillage, sometimes under more benign circumstances. The history of racial, ethnic and religious mixing in America has all too many tragic and ugly pages — as Emmett Till’s horrific murder reminds us. And yet America’s mosaic-like culture remains a splendid achievement. The idea that we should keep our hands off “someone else’s culture” is as repugnant as the recent suggestion by Iowa Republican congressman and anti-immigration hawk Steve King that we should not welcome “someone else’s babies.”

The idea of racial purity in culture has its own hideous history, from anti-Semitic depictions of Jews as cultural parasites to the Nazi campaign against “degenerate art.” To see this idea repackaged as “progressive” is grotesque.

And yet the war on “cultural appropriation” is a major cause of the social justice movement, targeting yoga classes, Asian food at a college cafeteria, and white belly dancers. It has even gone beyond the classic paradigm of the privileged appropriator taking from a marginalized or colonized culture. Latina pop singer Selena Gomez has been “called out” for wearing a bindi — a jeweled red forehead dot, traditionally a Hindu religious symbol—during a performance. Do Latinos have a history of oppressing Hindus?

Ironically, Gomez’s bindi-wearing was defended by Bollywood singer Priyanka Chopra, who saw it as “an embrace of Indian culture” and pointed out that many women in Southeast Asia wear the bindi as a secular decoration. This highlights a paradox of the cultural appropriation debate: the foes of “appropriation” often speak over the very people they claim to champion.

The activists protesting a “racist” kimono exhibit in Boston in 2015 ignored the Japanese-Americans who loved it. Today, the charge against “Open Casket” is led by a Berlin-based artist born in England to an Irish-Caribbean father and a Russian Jewish refugee mother (whose probably could have told her a thing or two about the dangers of ideological diktat in art). Yet Black, whose American experience is mostly limited to two years in an art program at the Whitney, feels entitled to speak for black Americans supposedly hurt by Schutz’s work — African-Americans like Goldberg, or Michael Edgill, the 29-year-old teacher attending the exhibition who told The Daily Beast that “there’s only one race: human.”

Cathy Young is a contributing editor at Reason magazine and is the author of “Growing Up in Moscow: Memories of a Soviet Girlhood” (Ticknor & Fields, 1989). Follow her on Twitter @CathyYoung63