How Russia Came to America — and Gave Us Trump 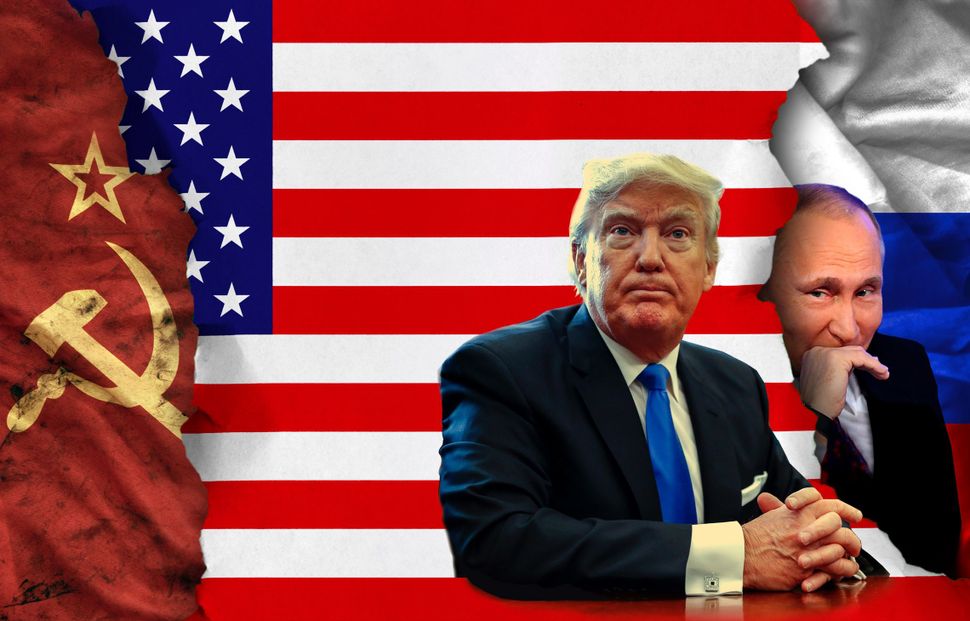 I first left the Soviet Union 37 years ago as a teen with my Russian Jewish family, full of excitement about America and freedom; I officially left it again nearly 25 years ago, on the day the USSR was formally dissolved and my birthplace simply became Russia. America fast felt like home. It wasn’t perfect, but in pessimistic moments I could always remind myself that at least it wasn’t the Soviet Union, with its all-pervading repression, fear and forced ideological conformity — or, in more recent years, Vladimir Putin’s authoritarian Russia, with its strongman worship, pseudo-patriotic zeal and corrosive cynicism.

Is that still true today — or is the United States on the brink of turning into Putin’s America? This has become a common claim following Donald Trump’s election. Some critics of the president go so far as to suggest we’re practically facing Russian occupation, given that the Trump campaign conspired with the Kremlin; others, including some Russian dissidents, warn simply that Trump may take America down a Putin-style, authoritarian path.

I doubt Trump is the Kremlin’s “Manchurian candidate.” Still, the parallels between Trump and Putin, and between Trumpism and Putinism, are real and troubling — enough to raise questions about our immunity to authoritarianism. But as we confront those questions, it is also important to recognize the authoritarian trends at the opposite end of the ideological spectrum; the “politically correct” progressive culture also has echoes of the Russian/Soviet experience.

While Trump is not Putin — a real estate mogul and reality TV host has a very different life experience than a KGB officer — his persona and public image have distinctly Putin-like qualities. There is the crude bluster that fans mistake for manliness and populist authenticity. Many famous Putinisms — from his promise to hunt terrorists and “whack them in the crapper” to the mocking comment that international monitors criticizing fraud in Russian elections ought to “teach their wives how to cook cabbage soup” — could be easily adapted into Trumpisms. Both men are thin-skinned and vindictive. Both trumpet conspiracy theories: in Trump’s case, about Barack Obama, the Clintons and vaccines; in Putin’s, about things like Western politicians’ alleged designs on Siberia’s natural wealth. Both think economic problems can be resolved by strong-arming businesspeople.

Personalities aside, there’s no question that Trump’s rise has brought a Putin-style political culture to America in at least one regard: Conspiracy-mongering and propaganda are increasingly indistinguishable from news and commentary (a good portion of Trump’s fan base gravitates to conspiracy-peddling media such as “Infowars” and the Alex Jones radio show (both of which have links to the Kremlin media machine); brazen lying is now viewed as smart, and bullying is respected as strength; dissenters are deemed enemies.

Like Putinism, Trumpism appeals to a sense of collective humiliation and grievance: a promise to reclaim lost greatness, but also a dark vision of one’s country being constantly wronged, subverted and cheated by foreign powers and by aliens and traitors within. And there is another troublesome similarity: Both Putinist and Trumpian populism flirt with racist, xenophobic and anti-Semitic movements when strategically useful.

Trump’s America definitely has moments of uncomfortable recognition for any Russia watcher. But before “the resistance” gets too smug, the culture of the American left has given me at least as many uncomfortable moments of Russian — in this case, Soviet — déjà vu.

No, I don’t mean that Obamacare is a communist plot. But the “social justice” left has taken on distinctly totalitarian overtones. Unlike communism, modern political correctness focuses on a wide range of identities rather than on class; but it, too, seeks a utopia of radical equality in which every trace of possible disadvantage is eliminated — even the risk of irritation at an innocent comment insensitive to one’s identity. And the atmosphere of enforced orthodoxy can be very similar, even if the punishment for deviation is not the gulag but a public shaming and/or a ruined career. (By the way, if the Trumpian right sometimes dabbles in the old-style anti-Semitism that has a solid niche in post-Soviet Russia, the social justice left is prone to Soviet-style anti-Zionism that can easily slide into anti-Semitism.)

At many colleges, freshman orientation serves as an indoctrination session in which students must learn to express correct attitudes about identities and social issues, going far beyond respect for fellow students. Campus “bias response teams” have turned into zealous thought-and-speech policing, with students and employees investigated and punished for offenses like believing that there are only two genders, or favoring the slogan “All Lives Matter” over “Black Lives Matter.” Recently, a University of Oregon law professor was found guilty of “racial harassment” for wearing “blackface” — in fact, a costume meant in tribute to a memoir by a black doctor — at a Halloween party in her own home.

The same atmosphere of groupthink and scrutiny for transgressions has been spreading in literary, artistic, “geek culture” and other communities espousing progressive values. Sci-fi and fantasy writers will say, if promised anonymity, that they fear getting published if their stories don’t feature feminist, anti-racist or pro-gay themes — and if they are careful not to express any heretical views around editors. Last year, Dave Truesdale, editor of the sci-fi review magazine Tangent Online, was expelled from The World Science Fiction Convention for “caus[ing] discomfort to others” by criticizing race- and gender-based identity politics in sci-fi on a panel he was moderating.

Did the backlash against political correctness cause Trump? Not quite; but it was certainly one factor in a vote many see as a blow to freedom.

P.C. did not turn us into the Soviet Union, and I doubt Trump’s victory will turn us into Putin’s Russia. We’ve had nearly 250 years of constitutional self-government; Russian democracy was less than a decade old, with barely functioning institutions and few checks and balances, when Putin seized power. But we will have to resist creeping authoritarianism — and for that resistance to be successful, it also must oppose the illiberal left. I don’t want either Putin’s Russia or Soviet Russia coming to our shores. It’s the freethinkers of America who need to unite.

Cathy Young is a contributing editor at Reason magazine and is the author of “Growing Up in Moscow: Memories of a Soviet Girlhood” (Ticknor & Fields, 1989). Follow her on Twitter @CathyYoung63

How Russia Came to America — and Gave Us Trump