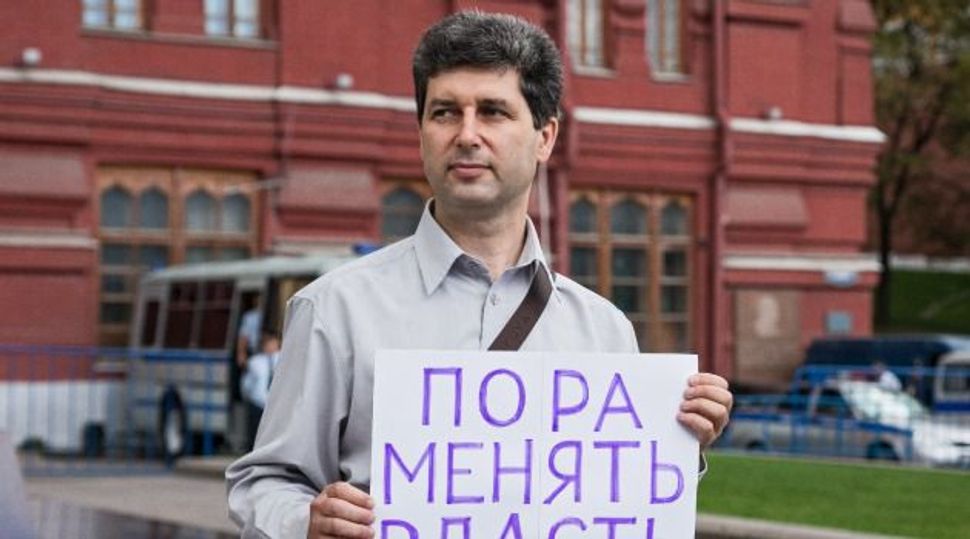 Moscow Protestor: Mark Galperin called upon Jews not to work for the Putin regime or to receive honors from it. Image by Alexander Makarov

On the second night of Rosh Hashanah, a group of five or six men disrupted a Jewish concert in the Great Hall of Moscow’s International Music House with a tear gas attack. A half-hour into the program, the men, who were seated in the first row, began shouting menacing insults at rock star Andrey Makarevich, the featured performer of the evening, and hurled canisters of pepper gas into the hall, forcing the audience of 400 to evacuate the building teary-eyed and coughing.

To the Russian Jewish Congress, a major national Jewish organization, this was a clear anti-Semitic attack. In a statement after the onslaught, the group condemned the incident as a desecration of the Jewish holiday, which many members of Russia’s largely nonreligious Jewish population celebrate through cultural rather than religious observance. The use of gas against Jews was especially hurtful, the RJC said, conjuring up painful memories of the Holocaust.

But state-controlled Russian TV networks presented things otherwise. NTV, for example, described the attack as a legitimate expression of outrage at Makarevich “for his friendship and support of the fascist junta in Ukraine,” where pro-Russian rebels, with Russian military aid, are battling government forces.

Television and the mainstream Russian press coverage have made no mention of the Jewish nature of the occasion (Rosh Hashanah), the concert program (“Yiddish Jazz”) or the makeup of the audience. In the media’s reading, the incident had nothing to do with anti-Semitism; it was all about Makarevich’s politics.

The truth lies somewhere in between, but closer to the RJC position than to that of NTV. Over the past year or two, Makarevich, lead singer of the iconic Russian rock band Time Machine (Mashina Vremeny), has been on two journeys. One has been an exploration of his Jewish roots: His mother is Jewish and reportedly lives in Israel, while his father is Belarusian. That journey took him to the American Yiddish swing music of the 1920s and ’30s, to songs such as “Bay Mir Bistu Sheyn,” made famous in America by the Barry Sisters. He produced a CD of “Yiddish Jazz,” which brought Yiddish music (sung mainly in English and Russian translation) into the mainstream of Russian popular culture.

The other journey has been Makarevich’s increasingly vociferous condemnation of the Putin regime and of the Russian invasion of Ukraine. He has marched in protest rallies in Moscow and traveled to Ukraine to perform, and his latest song is called “My Country Has Gone Insane.” (“My country has gone insane, / and there’s nothing I can do to help. / What should you do, how should you live, / if everything is topsy-turvy? / You don’t have to grow the wings of an angel; / just don’t be a shit. I’m sure of one thing: / it’s time to choose. / I’ve decided not to be a shit / and to live and die with a clear conscience.”)

Makarevich hasn’t connected his Jewish and dissident journeys, other than to say that he wants to be a more open person. But the xenophobic Russian extreme right, which the authorities have elevated to a legitimate position on the political spectrum, has connected the dots. For them, Makarevich represents an age-old paradigm: the treacherous kike. At a protest demonstration in the spring, a right-wing heckler shouted out at him, “Look at Andrey, the zhid has sold himself to Bandera.” That was a reference to Stepan Bandera, leader of the ultra-nationist Organization of Ukrainian Nationalists during World War II.

A group called the National Bolshevik Party took credit for the attack on his Rosh Hashanah concert. The assailants — who called out “Makarevich is a traitor of the homeland” in deep menacing voices for a full minute before hurling their tear gas canisters — didn’t shout anti-Semitic slogans. But the National Bolsheviks have a long-documented history of anti-Semitism. And ethnically Russian performers have not been vilified, nor have they had their concerts disrupted.

Makarevich is not alone; there are several activists of Jewish heritage in the Anti-War/Anti-Putin Movement, which attracted 30,000 to a protest march in September. Several were targeted in the recent propaganda film “The Junta’s Thirteen Friends,” which aired on NTV. At least five of those featured were Jewish in a country where Jews constitute an estimated 0.25% of the population. The film is a classic Soviet hatchet job, a genre now making a revival in Russia. In it, ominous background music accompanies secretly filmed videos and unrelenting character assassination. Among the Jews accused of treason, fascism and acting as paid agents of the Ukrainian junta were Makarevich, journalist Viktor Shenderovich, author Dmitryi Bykov and economist Stanislav Belkovsky.

But when the film came to activist Mark Galperin, who has helped organize several recent protests in downtown Moscow, it went out of its way to point out his Jewishness. Galperin himself has shown no particular interest in Jewish affairs or his Jewish identity, but he did write a Facebook post a year and a half ago, calling upon Jews not to work for the Putin regime or to receive honors from it. The film lashed out at him for his “unpatriotic” appeal. It then quoted a non-Jewish “expert” commentator: “Galperin is a disgrace to the Jewish people. We’ve seen many times in history how provocateurs like Galperin have been the catalysts and stimulators of the terrible phenomenon of anti-Semitism.”

So here we are again: Jews are “the catalysts and stimulators” of anti-Semitism. The charge was a not-so veiled warning by the state-controlled propaganda machine: Jews should be quiet and not join the protests, or they will face an anti-Semitic backlash.

The emotional statement issued by the Russian Jewish Congress after the Makarevich concert suggests the organization is worried that the backlash has begun, and that it will grow if it isn’t nipped in the bud.

Meanwhile, the other major Jewish umbrella organization, the Chabad-led Federation of Jewish Communities of Russia, known by the Russian acronym, FEOR, did not react to the tear gas attack. The federation has been a loyal ally of the Putin regime and presumably didn’t want to appear to be defending a Jewish “Fascist and Banderist,” even against a tear gas attack while playing apolitical Yiddish music. In other words, FEOR decided to heed the propaganda film’s advice. (A third major group, the Euro-Asian Jewish Congress, issued a condemnation of the attack, without the RJC’s rhetorical flourishes.)

In September I tried to console a colleague of mine in St. Petersburg who complained in a Skype conversation about the “difficult moral and psychological conditions” under which he and other intellectuals are living: “Come on,” I said to him. “You lived through Soviet times, you should be used to this kind of stuff.” He replied: “This time it’s much more aggressive. And it’s not just talk.”

The next day, an unknown assailant splattered a bucket of green disinfectant on Galperin, when he left his home on his way to a demonstration. Galperin attended the protest covered in green gook from head to toe. The police have not apprehended Galperin’s or Makarevich’s assailants. Don’t hold your breath.

Just a few weeks ago, I sent Jewish New Year greetings by email to another colleague in St. Petersburg. I wrote to him in Russian, but he responded in Hebrew — which surprised me, since we usually corresponded in Russian. But it dawned on me as I read on that his choice of language was intentional. The chances that the Russian security services would bother to scan Hebrew-language email messages were lower. “All my hopes for the future of my beloved country have been crushed,” he wrote. Then he quoted a poem by Chaim Nachman Bialik: “Now my well is like a wound; it only drips sometimes. And my heart smokes in secret, rolled in dust and blood.” That sums up the mood of many.

There is a war going on in Ukraine. And Jews face difficulties there as well. But friends tell me that the line in front of the Israeli Consulate is much longer in Moscow than in Kiev.

David E. Fishman is professor of Jewish history at the Jewish Theological Seminary of America. He directs JTS’s program in the former Soviet Union, Project Judaica.