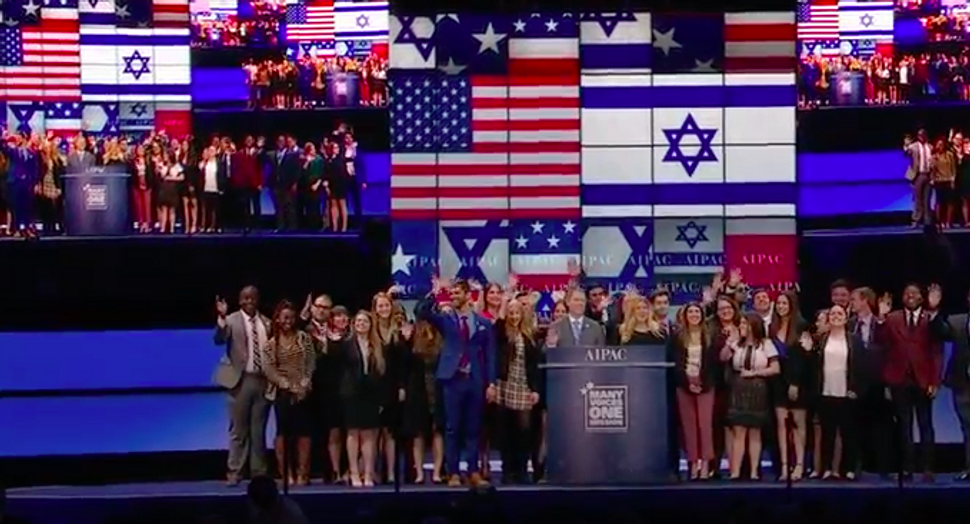 It’s fitting that the AIPAC Policy Conference, which convened this week in Washington, D.C., falls every year at around the same time as the holiday of Purim. Because the two have a lot in common.

On Purim, Jews read the Book of Esther, which tells the story of a Jew who unexpectedly gains influence with a mighty king. She learns that a wicked man named Haman threatens her people with destruction. Since her status may afford her some protection, she has the option to remain silent. But she does not. She uses her power to foil the wicked man’s plot and save her people.

That’s also the story of the American Israel Public Affairs Committee. American Jews are Esther. They have won influence with the most powerful government on earth. They could keep their heads down, focusing only on preserving their own safety and privilege. But wicked men threaten other Jews — the Jews of Israel — with destruction. So America’s Esthers, via AIPAC, use their influence to ensure Israel’s survival. Thus, American Jews transform their power into heroism.

It’s a particularly compelling narrative for American Jews old enough to remember a time when their community did not wield so much power and did not act so heroically in the face of Jewish destruction. If you’re a 70-year-old old at AIPAC, your parents were middle-aged when Hitler ruled Germany. Back then, American Jewish organizations did not summon half the members of Congress to conferences where they dined on kosher food and proclaimed their solidarity with the Jewish people. In the 1930s and ’40s, American Jews were, by today’s standards, culturally marginal and politically timid. They lacked both the power and the will to behave like Esther.

AIPAC affords their children and grandchildren the chance to redeem that failure. “If we had AIPAC in the ‘30s and ‘40s, we would have saved millions of Jews,” declared David Steiner, AIPAC president, in 1991. “But Jews were afraid to open their mouths. They didn’t know how.”

There’s another, less obvious parallel between the AIPAC Policy Conference and Purim. In one of the Book of Esther’s most remarkable moments, Mordechai — Esther’s surrogate father, who faces death for refusing to bow down to Haman — warns his daughter against believing that by remaining silent she can save herself. Don’t think that you will escape just because you are in the king’s house, Mordechai instructs. You and your father’s house will be destroyed, too.

There are two ways to read Mordechai’s warning. Neither the King nor Haman know that Esther is a Jew. Mordechai may be suggesting that if she remains silent, Haman will eventually discover her identity and murder her, too. Or, less obviously, perhaps Mordechai is suggesting that if Esther remains silent, and abandons her people, she and her father’s house will be destroyed not through genocide but through assimilation. Esther, after all, has already taken the name of a Persian goddess, Ishtar. And she has married a Persian man.

The Jews of AIPAC know there are many intermarried American Jews with names like Mary and Christopher. And they worry almost as much about their assimilation as they worry about Israel’s destruction. AIPAC offers an answer to that too. Like Mordechai speaking to Esther, it tells American Jews that by protecting the Jewish people, they will also secure their own survival. Why remain Jewish in the highly assimilated America of 2017? Because Israel needs you, and by safeguarding it, you can be a hero.

At the end of the Book of Esther’s seventh chapter, Haman is hanged. But the story doesn’t end. With the King’s blessing, the Jews take revenge, killing 75,000 of Haman’s people.

Many rabbinic commentators justify this as self-defense. But Haman is already dead and the Jews now enjoy the King’s protection. As Rabbi Jill Jacobs has noted, the text offers no evidence that with the political situation turned upside down, Haman’s people still represent a threat. Moreover, the Jews are instructed to kill not only men but also “little ones and women.”

As if to reinforce the message, Jews on the Shabbat before Purim read a section from the book of Samuel in which King Saul is commanded to “slay both man and woman, infant and suckling” of the Amalakites, from whom Haman’s people descend.

The Book of Esther, in other words, imagines power not only as necessary, but also as perilous. It can be used heroically, and it can be used horrifically. It can guarantee Jewish survival and it can threaten the survival of others. It is a blessing and a responsibility and a danger.

AIPAC, by contrast, does not wrestle with Jewish power. It celebrates it to the point of intoxication. At its conference this week in Washington, it encourages Jews to drink it in until they cannot distinguish between 1938 and 2017, between the liquidation of the Warsaw Ghetto and the dismantling of a settlement in the West Bank, between our right to exist and our right to oppress.

Peter Beinart is a Forward senior columnist and contributing editor. Listen to Fault Lines, his podcast with Daniel Gordis, available here and on iTunes.