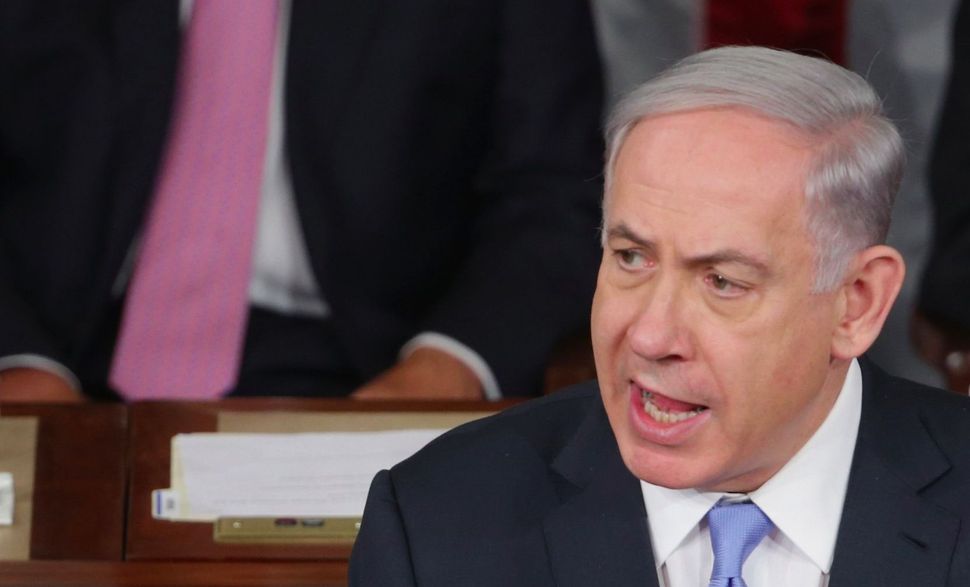 Almost two years ago, Israeli Prime Minister Benjamin Netanyahu went before Congress to denounce President Obama’s nuclear agreement with Iran. The deal, he warned, “could well threaten the survival of my country and the future of my people.”

Then, in the closing moments of his speech, Netanyahu addressed the late Elie Wiesel, who was seated in the crowd. “Elie,” he declared, “your life and work inspires to give meaning to the words ‘Never again.’ And I wish I could promise you, Elie, that the lessons of history have been learned. I can only urge the leaders of the world not to repeat the mistakes of the past.”

The implication was clear: Approving the nuclear deal meant permitting a second Holocaust. The only difference was that, this time, a Jewish state would wage war to prevent it. “I can guarantee you this,” an emotional Netanyahu told a hall echoing with applause. “The days when the Jewish people remained passive in the face of genocidal enemies, those days are over… I can promise you one more thing: Even if Israel has to stand alone, Israel will stand.”

Almost two years later, Netanyahu is returning to a very different Washington. Obama is gone. Donald Trump, who last spring told the American Israel Public Affairs Committee, “My No. 1 priority is to dismantle the disastrous deal with Iran,” has replaced him. Republicans, who overwhelmingly opposed the Iran nuclear deal, now control both houses of Congress.

The political barriers that Netanyahu faced two years ago are gone. He and Trump are now free to renounce the Iran nuclear deal, and thus, by Netanyahu’s logic, prevent a second Shoah. Or, failing that, Netanyahu could take matters into his own hands and bomb Iran’s nuclear sites himself, secure in the knowledge that Trump is less likely than Obama to object.

Yet none of that is happening. To the contrary, Defense Secretary James Mattis testified in January that the Trump administration will “live up to” the nuclear agreement. Last week, former national security adviser Michael Flynn, Secretary of State Rex Tillerson and presidential son-in-law Jared Kushner reportedly expressed the same sentiments to the European Union’s foreign policy chief, Federica Mogherini. Last Friday, even as it imposed new sanctions on Iran for its ballistic missile tests, Trump’s Treasury Department insisted that the penalties were “fully consistent with the United States’ commitments under the” nuclear deal.

Even stranger, Netanyahu doesn’t seem to mind. According to Reuters, “Israeli officials privately acknowledged that,” while in Washington, Netanyahu “would not advocate ripping up a deal that has been emphatically reaffirmed by the other big power signatories.” Nor is Netanyahu repeating his threats to strike Iran himself, something he warned Congress he might do if it approved the nuclear deal.

What explains this odd turn of events? The most plausible answer is that Netanyahu, for all his thunderous emotion, wasn’t being honest when he railed against the nuclear agreement. He wasn’t actually worried that the deal “paves Iran’s path to the bomb.” His real concern was that it would improve relations between Washington and Tehran, thus empowering Israel’s greatest regional foe, and reducing America’s dependence on Israel. Now that the chances of a U.S.-Iranian détente have diminished, so have Netanyahu’s fears about the nuclear deal.

The first clue is that Israel’s security establishment never bought Netanyahu’s Holocaust analogy. The Israel Defense Forces’ former chief of staff and defense minister Moshe “Boogie” Ya’alon, former IDF chief of staff Dan Halutz and former Mossad heads Efraim Halevy and Tamir Pardo have all said that even if Tehran did acquire a bomb, Israeli nuclear deterrence would prevent an Iranian strike. Israeli security officials also strongly opposed the kind of preventive Israeli military attack that Netanyahu hinted at in his speech to Congress. As veteran Israeli journalist Nahum Barnea reported in 2012, “Not one high-ranking official in the Israeli establishment — not in the Israel Defense Forces’ top echelons, nor in the defense establishment and not even the President of Israel [then Shimon Peres]— currently supports an Israeli attack.”

Israeli security officials also rejected Netanyahu’s claims about the nuclear deal itself. Last October, Haaretz reported that the members of Israel’s Atomic Energy Commission, the country’s foremost experts on nuclear weapons, “are convinced that the April 2 agreement between Iran and the world powers will prevent Iran from developing a nuclear bomb.” A few months later, the IDF’s chief lieutenant general, Gadi Eisenkot echoed that view, declaring that the agreement had contributed to a “decline” in military threats against Israel.

But while Israeli security officials disagreed with Netanyahu about the Iranian nuclear program, most saw Iran as a formidable regional adversary. Israeli military leaders have long worried about threats on the country’s eastern flank. Once upon a time, that fear focused heavily on Saddam Hussein’s Iraq, which in the 1980s boasted the world’s fourth-largest army. But when Saddam was weakened by the Gulf War and a decade of American sanctions, and then ultimately toppled altogether, Israeli leaders refocused their fears on Iran, which was filling the power vacuum left by Iraq’s decline. In his book about Israeli-Iranian relations, “Treacherous Alliance,” Trita Parsi quotes the former Israeli brigadier general Shlomo Brom as observing that “because Iraq was removed, Iran started to play a greater role in the threat perception of Israel.”

What really bothered Israeli security officials, in other words, wasn’t the Iranian nuclear program per se — which had existed since the 1980s, when Israel was still selling Iran arms. What bothered them was Iran’s emergence as a potential regional hegemon. And what bothered them about the Obama administration’s nuclear deal was not that it paved the way for Iranian nukes but that it paved the way for U.S.-Iranian détente, thus ending America’s effort to restrain Iranian power.

In speaking to Americans, Netanyahu emphasized the nuclear issue because it allowed him to invoke the specter of the Holocaust, which is what he’s been doing his entire career. He is, after all, the man who in 1993 compared Yitzhak Rabin to Neville Chamberlain for signing the Oslo Accords. In 2002 he advocated preventive war against Saddam’s Iraq because “had the democracies taken pre-emptive action to bring down Hitler in the 1930s, the worst horrors in history could have been avoided.” He has justified the Israeli bombing of Lebanon and Gaza by comparing these bombings to the Allied bombing of Hamburg and Dresden.

Politically, focusing on the nuclear issue was shrewd. There’s little that mobilizes American Jews, and pro-Israel American Christians, more than the fear of a second Holocaust, this time directed at the Jewish state. Attacking the nuclear deal for ushering in a U.S.-Iranian rapprochement that tilted the Middle Eastern balance of power wouldn’t have packed the same punch.

But now it’s clear that the power balance isn’t tilting. The Trump administration isn’t renouncing the nuclear agreement, but it is definitely renouncing any prospect for warmer relations with Tehran. It’s not only imposing new non-nuclear sanctions on Iran, it’s actually mulling sending the U.S. Navy to board Iranian ships delivering weapons to the Houthi rebels in Yemen.

So when Netanyahu visits the White House today, he won’t talk about a second Holocaust or an Israeli strike. Such rhetoric is no longer necessary.

The organized American Jewish community has been played. And it doesn’t care.