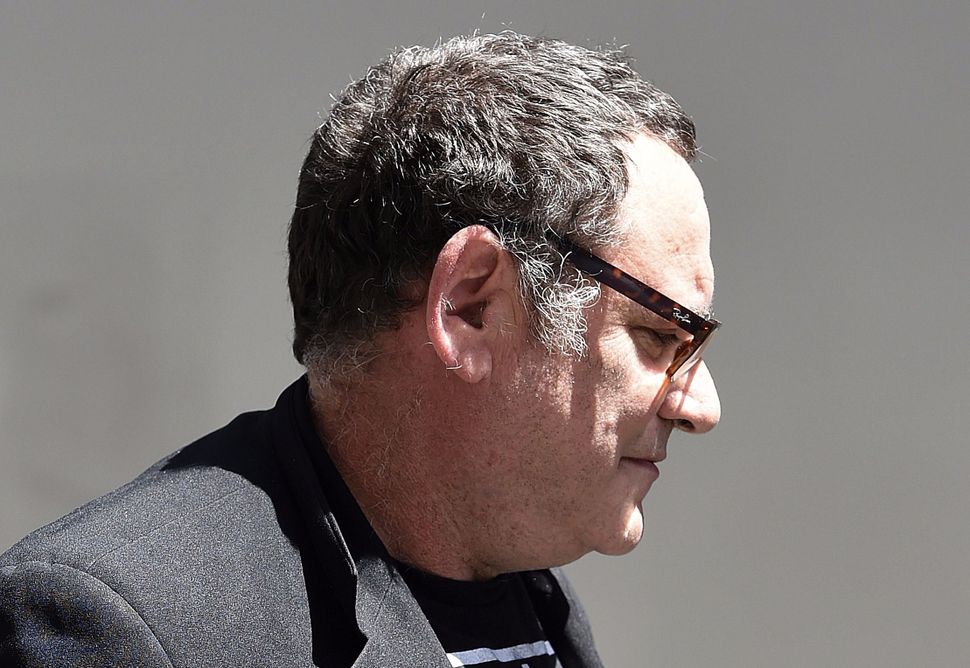 Image by Photo of Gilad Atzmon by Getty Images

The email was a blatant appeal to my ego. The subject line read “Speaking Engagement,” and the sender, who I didn’t know, was inviting me to speak about whatever I wanted to — wow! — on a New York City panel celebrating the release of a new book by “internationally acclaimed British jazz saxophonist, philosopher and author … Gilad Atzmon.” They were inviting me, Atzmon’s volunteer publicist explained, “because of my “honest and thoughtful perspective” which would be “valuable.”

I hadn’t heard of Atzmon before, and the panel was part of a “small conference” scheduled at the hip Theater 80 St. Marks in the East Village. The vague synopsis the publicist sent for Atzmon’s new book, “Being in Time: A Post-Political Manifesto,” simply states that “much of humanity has been reduced to serve the interests of big money and oligarchy” and claimed that “Left and Right have become indistinguishable and meaningless.”

But a curious phrase lurked at the bottom of the page: “a tale of the decisive victory of one elite.” Gilad Atzmon, noted the press release, “has managed to dissect the ethos, strategy and culture that are driving this invincible elite” [emphasis added].

Googling, I discovered that Atzmon, born in Israel, identifies himself as “a proud self-hating Jew” and also as someone who “hasn’t been a Jew for years.” American white nationalist Greg Johnson, an admirer, calls him a “self-exterminating Jew.” Since 2000, Atzmon has been spewing viciously anti-Semitic writings with statements like “we must begin to take the accusation that the Jewish people are trying to control the world very seriously” and “with Fagan and Shylock in mind, Israeli barbarism and organ trafficking seem to be just other events in an endless hellish continuum.” Then there was this: “It took me years to accept that that the Holocaust narrative, in its current form, doesn’t make any sense… We should… ask … why were the Jews hated? Why did the European people stand up against their next-door neighbors? … What is the holocaust religion there to conceal?”

I can’t recall any other “offer to speak” that has ever made me feel such a mix of emotions. I’m a Jewish writer, a lesbian and a proud progressive. I used to be a Village Voice columnist. I knew that the racist right, both in this country and around the world, had become increasingly brazen. But had they become so bold that they thought a Jewish lesbian leftist would rally to their side? Or were they just trying to dupe me? I felt horror, fear, anger, disgust.

But I also felt an overwhelming anxiety about why Atzmon’s backers thought I in particular would speak on a panel promoting him. Did something in my writing make them think I’d be sympathetic? As a reporter, I’ve written about the anti-gay Christian right many times, often going undercover to their gatherings. And I have, in fact, tried to “understand” them. Why would anyone spend their time trying to take rights away from another group of people? I spent a good portion of my career trying to find out. Did I go too far trying to “understand”? And was this why a man who’d said “the [Nazi] death marches were actually humane” thought I’d join his panel?

I have wanted to understand what makes far-right bigots tick, but I never wanted to support their mission. I finally realized that the primary reason Atzmon’s backers had approached me was not because of anything I’d written, but because obfuscating, and deliberately obscuring hateful premises behind seemingly genuine critiques of real-world oppression, are a fundamental strategy of the white supremacist and anti-Semitic movements. Gilad Atzmon may have begun as a progressive critic of Israel, but he morphed into someone the ADL called “an outspoken promoter of classic anti-Semitic conspiracy theories,” and he has made a career out of conflating the two stances.

It is symptomatic of this bizarre political moment, when white nationalist sympathizers hold power in the White House, that progressive Jewish writers should be approached to legitimize a man who said “the Jewish tribal mindset … sets Jews aside of humanity.” When white nationalism and anti-Semitism are being discussed as mere “political ideologies” equivalent to any other, when millions voted for Trump because they believed his lie that he would fight the rich for them we need renewed political clarity in our country more than we need air and water.

The dangers of such obfuscation are getting clearer by the moment. The “progressive” former Congresswoman Cynthia McKinney, whom the Green Party tapped to run for president in 2008, has written the introduction to Atzmon’s book, and activist Jewish lawyer Stanley Cohen has agreed to be on his April 30 panel at Theater 80. In a sense, it’s of a piece with Atzmon’s perennial ability to get some on the left (Richard Falk, James Petras, the magazine Counterpunch) to endorse or publish his work. But the willingness of some so-called progressives to support blatant anti-Semitism is oddly mirrored by the right’s increasingly successful use of the tropes of class oppression against Jews, African-Americans, and immigrants.

When Atzmon argues that “the Jewish elite” are destroying “working people,” When Donald Trump warns that “a small handful of global special interests” are letting “radical Islamic terrorists enter the country by the thousands” to “disenfranchise our working class,” it’s time for all of us to be utterly and completely transparent about our politics, exactly what we’re saying and what it means.

Donna Minkowitz is the author of “Growing Up Golem: How I Survived My Mother, Brooklyn and Some Really Bad Dates.”