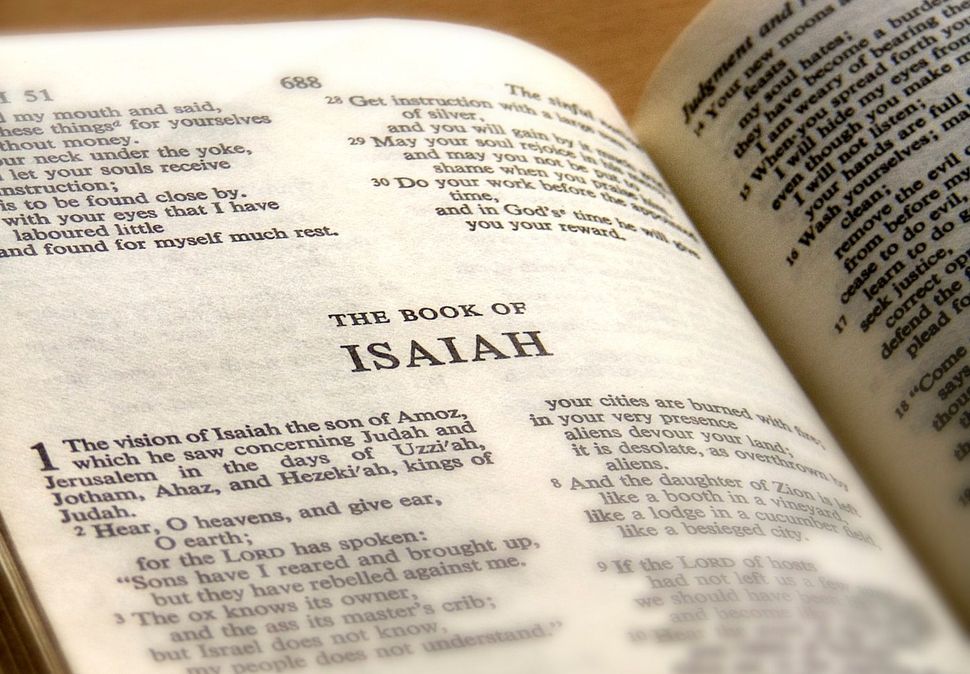 “Which part of Torah do you want to study?” I asked Judy Clark at our first meeting.

The gray-haired woman leaned across the table in the visitors’ room at Bedford Hills prison and answered immediately. “Isaiah.” she said. “I need to study Isaiah.”

“Because I was just like him, believing I had the only righteous view. Her smile was warm, rueful. “And I was always judging and condemning everyone else. I have to make sure I’m never like that again.”

Rabbis Felicia Sol and Mychal Springer had sent me up to the prison with assurances that Judy — who is serving a 75-to-life sentence for murder that Governor Andrew Cuomo commuted late last year and who faces a parole board on April 4 — wanted to study Torah and that she was deeply remorseful for her crime. Still, I had a moment of pure cognitive dissonance that day of our first visit. Could this be the same person as the radical who’d surely thought religion was the opiate of the masses, who’d been part of the 1981 Brinks robbery, which left two police officers and a security guard dead and a community shattered?

So we began our study of Isaiah with Judy’s stated purpose of uprooting any remnants of the dogmatic person she’d been. Isaiah’s dire prophecies and utter certitude seemed to confirm Judy’s negative sense of him. But as we continued our study, she came to a more nuanced view.

She identified with the passage in chapter I in which God rejects the importance of ritual sacrifice. Instead, Isaiah told the people to “cease to do evil; learn to do well; seek justice; relieve the oppressed.” Judy had once prided herself on sacrificing for the cause embraced by her isolated underground group. During her years in prison, she had made the teshuvah, the turning, enjoined by God, pouring her energy into a variety of service-oriented projects to relieve suffering in the prison.

Judy found much in Isaiah to further confirm and inspire her own ongoing process of repentance and repair. We were reading chapter 5 in which the prophet warns: “Woe unto them that call evil good, and good evil; that change darkness into light, and light into darkness; that change bitter into sweet, and sweet into bitter!”

“This is key,” Judy said. “Calling violence justified, calling my own views righteous and everyone else’s unjust, that’s what led me to the carnage of my crime.” Just then two men came by our table on their way out of the visitors’ room and gave Judy an enthusiastic greeting. Once they were beyond hearing range, Judy told me: “Those guys insist on referring to me as a political prisoner but I’m not. I committed a crime and taking responsibility means calling it by its bitter name, not dressing it up as something sweet.”

My lessons with Judy has continued for eight years up to the present. She always makes this kind of probing and deeply personal connection to whatever text we’re studying, whether Hosea or Joshua, talmud about illness and healing, Buber’s I and Thou, or stories of our foremothers and forefathers. Judy has a special affection for these characters because, as she says: “They were very flawed just like me, made tragic mistakes just like me, and had to deal with dire consequences just like me.”

When Jewish holidays come along, we take a break from whatever we’re studying to look at the Torah and Haftarah portions for the day. The first Rosh Hashana of our meeting we read the akedah, the binding of Isaac. I told Judy how many times I’d heard Jewish parents say they couldn’t understand Abraham, that sacrificing one of their own children was inconceivable. “But I get it,” Judy said. “Harriet was less than a year old when I left her to do the Brinks robbery. I sacrificed my own daughter and my chance to be her full-time mother for what I thought was a greater good.” Judy took a deep breath and added: “And what about the sacrifice of the other children, the children of the men who were killed?”

Mothers and children: that might be the site of Judy’s deepest remorse and most heartfelt repair. One of Judy’s most fervent wishes is that she could go back and make the decision to stay with her baby on the day of the robbery. But, of course, she can’t go back. Instead, she has moved forward as a leader in the prison’s nursery program, where inmates can live with their own babies, and in the children’s center where she co-facilitates parenting groups.

This past Rosh Hashana Judy and I looked at the Haftara, the story of Hannah. Unable to conceive, Hannah prays to God for a son and promises to give him up to service in the Temple if her prayer is granted. She gives birth to Samuel and, once she’s weaned him, takes him to the high priest at Shiloh, knowing that will mark the end of her mothering him. Judy read aloud Hannah’s speech at this moment of separation: “My heart exulteth in the Lord, my Horn is exalted in the Lord; my mouth is enlarged over mine enemies because I rejoice in Thy salvation.”

I told her that at services the week before the rabbi had said he didn’t believe that Hannah, that any mother, could possibly have spoken this kind of triumphal, warrior-like praise when giving up her child.

“I do believe it,” Judy said. “To abandon my child, to put other people’s children in harm’s way, I had to tell myself I was sacrificing for a greater cause. The comfort of being so absolutely certain led to my participation in a catastrophic crime. I’ve spent so much of my time in here learning to take responsibility, all the while painfully aware that I can never undo the loss I helped inflict.”

Our rabbis tell us about the Torah: “Turn and turn for everything is in it.” Perhaps they wouldn’t be surprised, then, by Judy Clark, for whom torah study has been a way into deeper levels of remorse and higher, more generous acts of repair. Judy has taken her teshuvah (repentance) a very long way. But, as she has written: “I deeply desire to apologize personally to the victims of my crime. I hope one day to heal the tear in my family and my community’s fabric through being released.” Keyn yi-hi ratzon. May it be so.

Susan Kaplow, MSW, Phd., has been committed to serious Jewish study since the 1950s, when Chaim Potok was her teacher at Temple Har Zion. She has studied at Drisha Institute and at Mechon Hadar. Currently, she works as a visual artist. Her artwork has been exhibited to the HUC-JIR Museum and the Bernard Museum of Judaica, both in NYC. Kaplow is a member of Congregation Beit Simhat Torah and of the Visual Arts Beit Midrash of the Streiker Center.