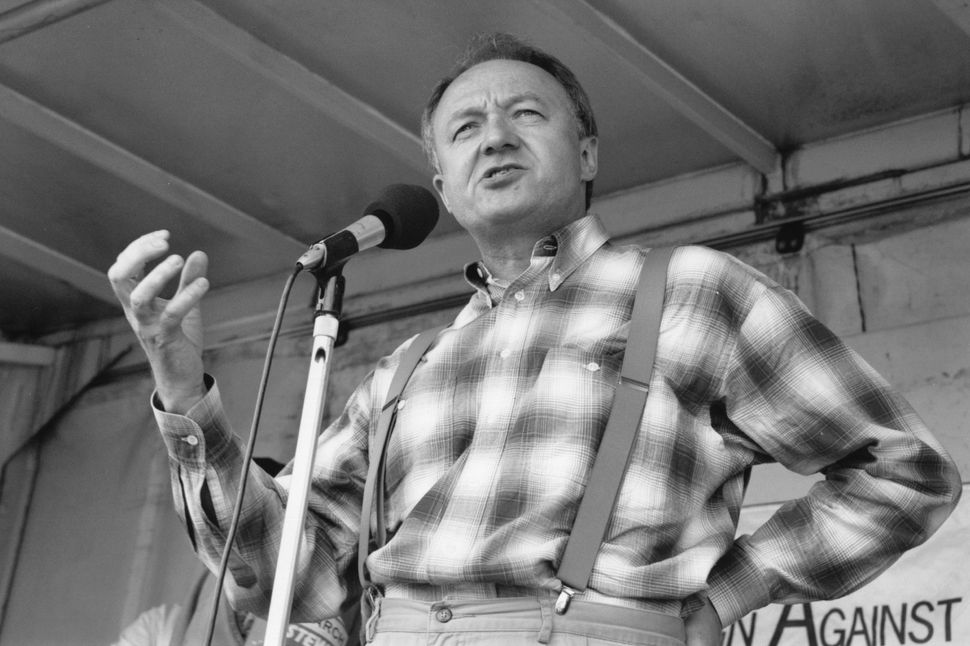 There have been few occasions over the past three decades when a battle between Britain’s Labour party and the country’s Jewish community has not featured the name of Ken Livingstone. If the former London mayor was not at the center of the argument, he soon made sure to insert himself into it.

Today, Labour decided that it is happy for this association to continue.

Despite finding Livingstone guilty of bringing the party into disrepute for claiming last year that Hitler had been a supporter of Zionism “before he went mad and ended up killing 6 million Jews,” it nonetheless decided not to expel him, as had been widely predicted. Instead, it merely slapped him on the wrist and suspended him from holding office within the party for a year. Livingstone made his original claim when defending a Labour MP accused of anti-Semitism and has repeated it frequently. Only last week, he suggested that there had been ‘real collaboration’ between Jews and Nazis before the Second World War.

That Labour has decided that Livingstone can remain within its ranks will only worsen the once close, but now deteriorating, relationship between Labour and British Jews.

“Red Ken,” as Livingstone was known, dominated the politics of Britain’s left-leaning capital for 30 years. He served as head of the Greater London Council throughout the early 1980s; a member of parliament for the north-west London constituency of Brent East for 13 years; and then the city’s two-term mayor during Tony Blair’s premiership. Throughout this time, his left-wing populism, colorful asides and frequent attacks on his own party’s leadership supplied grateful journalists with copious copy.

But one group of London voters proved doggedly immune to his appeal. Many of the capital’s 170,000 Jews were long-time Labour supporters and, indeed, held prominent positions in the party. Almost from the moment he emerged onto the political scene, however, Livingstone displayed a callous indifference to Jewish sensibilities. At times, he has appeared to have taken a perverse delight in offending Jews, almost as if he regarded it as proof of his political virility.

The charge sheet goes back to Livingstone’s days at the GLC. During his time as its leader, Livingstone offered the bizarre pronouncement that Jews ‘have been organizing here in London, and throughout Britain, into paramilitary groups which resemble fascist organisations’ and alleged that what Britain had done to the Irish was worse than what Hitler had done to the Jews. During this time, too, Livingstone’s newspaper, the Labour Herald, printed a cartoon of Menachem Begin dressed in a Nazi uniform amidst the skulls and corpses of Palestinians with the caption ‘The Final Solution.” By October 1985 relations between the community and Livingstone were so bad that an attempt to organize a lunch to celebrate the Jewish contribution to London was abandoned when both the Chief Rabbi — the planned guest of honor — and the Board Of Deputies Of British Jews indicated that they would not attend if Livingstone was also present.

Livingstone’s second time in charge of London’s government proved as contentious as his first. In 2004, he invited the militant Islamic cleric, Yusuf al-Qaradawi, to City Hall, publicly embracing a man who – besides condoning wife-beating and the murder of homosexuals – had justified suicide bombings in Israel and suggested that the Holocaust was both exaggerated and a divine punishment.

The following year Livingstone steadfastly refused to apologize for likening Jewish newspaper reporter Oliver Finegold to a concentration camp guard. As that row rumbled on, he then suggested that the Reuben brothers, two prominent property developers who had incurred his displeasure, should ‘go back to Iran and see if they can do better under the ayatollahs’. Leaving aside that the brothers were born in India and hail from an Iraqi-Jewish family, it was almost impossible to imagine Livingstone directing such boorish remarks towards members of any other minority group.

Having been defeated in his bid for a third term in 2008, Livingstone attempted to reclaim the mayoralty from Boris Johnson (now Britain’s Foreign Secretary), four years later. Attempting to rebuild the bridges he had so carelessly burnt with London’s Jews was, however, not a priority. In fact, quite the opposite: Livingstone took up paid presenting work on Press TV, the mouthpiece of the Iranian regime; accused his critics of being ‘obsessive’ over his relationship with al-Qaradawi; and characterized the furor over his specious comments to Feingold were “a huge fuss over nothing.”

Many have long suspected that Livingstone’s actions were part of an identity politics strategy designed to win the votes of London’s Muslims – a more electorally powerful group – by pitting them against the city’s Jews. Livingstone did little to dispel such fears: shortly before his 2012 rematch with Johnson, the former mayor told a group of Jewish Labour supporters that Jews were rich and thus not likely to vote for him anyway.

Many Jews will not be surprised by Labour’s apparently inexhaustible supply of patience for Livingstone’s questionable behaviour. The former mayor is emblematic of the hard left which, under the leadership of Jeremy Corbyn, is now firmly in the party’s driving seat. Corbyn and Livingstone are long-time allies. They are part of a generation which, as Dave Rich argued in his recent book, “The Left’s Jewish Problem: Jeremy Corbyn, Israel and Anti Semitism,” came of age politically during the era of decolonisation. To them, Zionism amounts to ‘a racist, colonialist ideology, and Israel an illegitimate remnant of Western colonialism in the Middle East,” wrote Rich.

Like Livingstone, Corbyn’s supporters in the Shadow Cabinet and the unions have suggested that the allegations of anti-Semitism which have swirled around the party over the past year are simply a right-wing plot designed to discredit the Labour leader and his support for the Palestinian cause. Such arguments are merely the latest variant of what sociologist David Hirsh of Goldsmiths College, University of London has christened the ‘Livingstone formulation’: the suggestion that Jews disingenuously ‘play the anti-Semitism card’ to stifle criticism of Israel.

Unsurprisingly, Corbyn’s attempts to show he takes anti-Semitism in Labour’s ranks seriously have proved unconvincing. The credibility of a report he commissioned into the problem last year – which largely exonerated the party – was left in tatters when just weeks after its publication he awarded its author a peerage and then appointed her to his shadow Cabinet.

A poll last summer suggested just 8.5 percent of Jews supported Labour. Today’s verdict means Jewish support for a party many once considered their natural home may yet fall further.

Robert Philpot is a contributing editor to Progress magazine and a former special adviser to the last Labour government. His book, “The Honorary Jew: How Britain’s Jews Influenced Margaret Thatcher And Her Beliefs” will be published this summer.