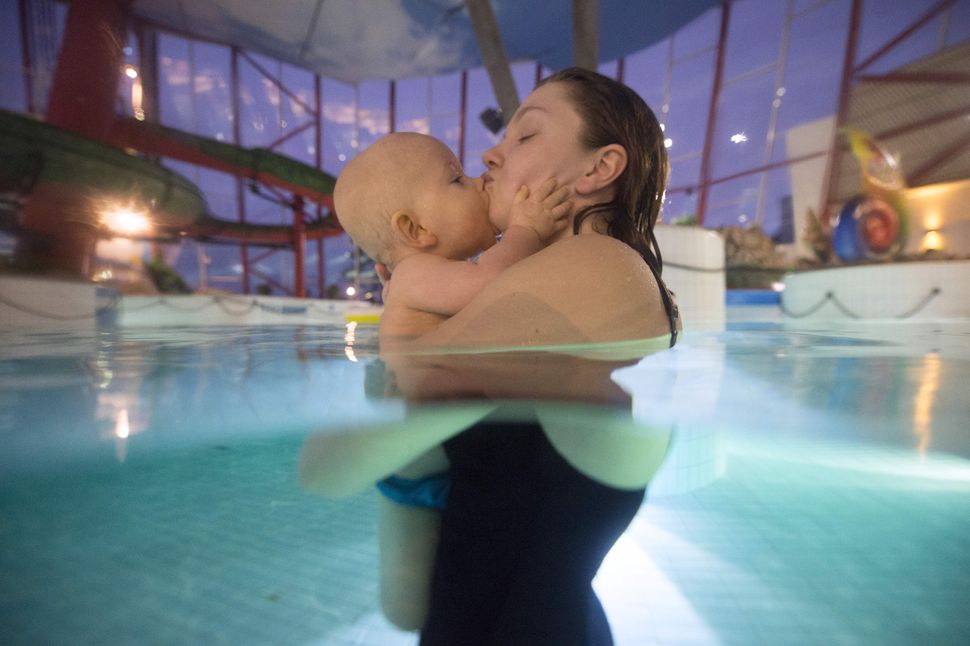 Recently at March For Life, an annual rally held in Washington, D.C., I hoped to meet and write about other pro-life Jewish marchers.

The record-setting crowd was thick and palpably upbeat after the election of Donald Trump and his nomination of Neil Gorsuch to the Supreme Court. With Donald Trump’s latest threats to defund the largest abortion provider, Planned Parenthood, unless it ceases performing the procedure, and Gorsuch’s confirmation, those who were present at the March are undoubtedly more energized now.

But ultimately I could not find any other Jewish participants. In fact, after the March I joked to my husband that our two Jewish children probably had the rosary memorized after hearing it recited dozens of times over the course of several hours.

Jews and pro-life Christians don’t necessarily see eye-to-eye on the issue of abortion. The pro-life movement in the United States generally believes life begins at conception, and does not allow for exceptions when the life of the mother is in jeopardy. The Jewish view, taken from many Jewish texts, holds more nuances. The most cited passage on the halacha regarding abortion comes from Tractate Ohalot in the Mishnah:

If a woman is in hard travail, one cuts up the child in her womb and brings it forth member by member, because her life comes before that of [the child]. But if the greater part has proceeded forth, one may not touch it, for one may not set aside one person’s life for that of another.

The Orthodox Jewish view is therefore not pro-life, but not at all pro-choice either, as current federal law governs abortion. The Guttmacher Institute, a nonprofit that conducts reproductive health research, asked women, “Why did you choose to abort?” The most common response: women did not desire to have a child. Far fewer respondents faced health issues. Given that polling, most abortions breaches Jewish law within an Orthodox framework.

A common misconception among those outside the pro-life community is a misunderstanding about what it means to be pro-life. As a pro-life Jewish woman, my goal isn’t changing U.S. law regarding Roe v. Wade, largely because, despite the possible defunding of Planned Parenthood and the nomination of Gorsuch, do I expect it will be altered in my lifetime, even under the current administration.

Any illusions pro-life voters might have been under should have been reevaluated given the news that Ivanka Trump met in secret with the President of Planned Parenthood Cecile Richards. My primary concern, and that of many others involved in pro-life activism, is supporting women so that they bring the babies within them to term to be raised in loving homes, either with their birth mothers or with adoptive parents.

Two pro-life Jewish nonprofit organizations, one in the United States and one in Israel, carry out that noble mission — supporting mothers. In Israel, The Committee For The Rescue of Israel’s Babies (C.R.I.B.-Efrat) calls itself the “real pro-life” organization, because “we allow the woman to make a real choice, based on what she really wants, without social or financial pressure.” C.R.I.B.-Efrat provides new baby kits with linens, clothing, bottles and other necessities to relieve the financial pressure involved with bringing an infant home from the hospital. They also provide medical counseling for those who may have been told to abort because of a medical condition faced by the mother or baby.

A similar U.S. organization, In Shifra’s Arms, connects pregnant women with resources such as counselors and referrals to agencies to assist women with the financial and logistical burden of bringing an unplanned pregnancy to term. These agencies can help provide support for childcare, employment services, and health insurance. In Shifra’s Arms also sends clients free care packages throughout a woman’s pregnancy stocked with maternity clothes and baby supplies to alleviate the financial strain as well.

In a conversation with the Forward Erica Pelman of In Shifra’s Arms explained that the most effective way to support women, and therefore bring more Jewish babies into the world, is to provide emotional, physical and financial support, knowing that the reason most women abort is due to such constraints, not medical ones. Pelman takes great care to fill the organization’s board with both pro-life and pro-choice members for the mission of primarily with supporting pregnant women in need.

At the March for Life this past year, my three-year-old daughter didn’t end up picking up how to say the rosary (thankfully), but she did love the chant recited throughout the March and repeats it still: “We love babies, how about you?” My daughter had no idea why we were there; she was merely along for the ride, under the impression the “parade” (as we called it) was a celebration for her new baby sibling coming at the end of April. She learned that our family loves babies; and by supporting C.R.I.B.-Efrat and In Shifra’s Arms, both financially and ideologically, as a pro-life Jewish family we try to bring as many of them to term by supporting their mothers as well.