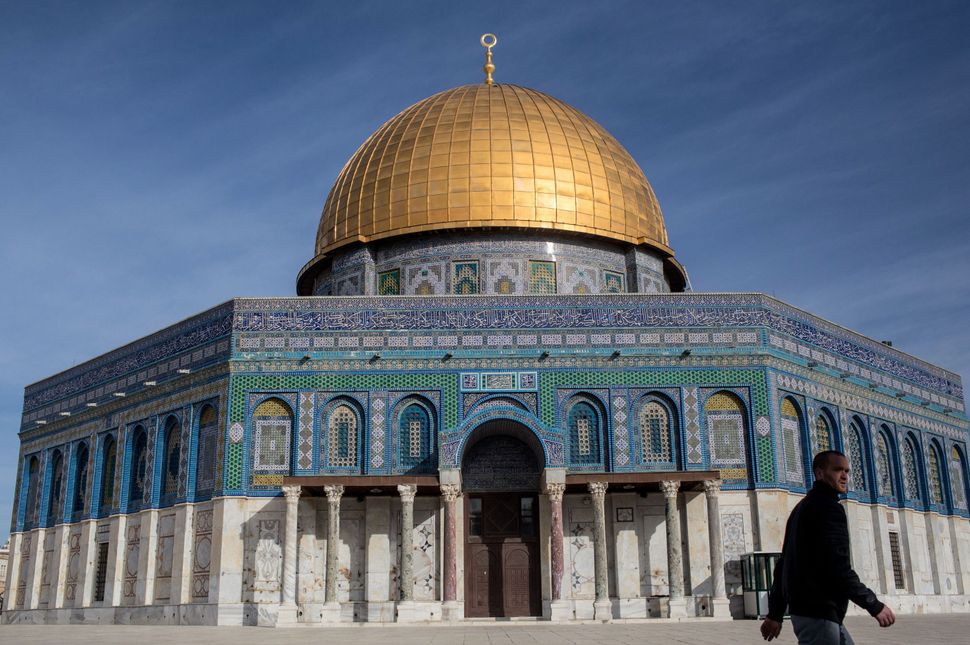 Passover came early to Jerusalem this year when a group of Jewish religious nationalists gathered in the Old City of Jerusalem on April 6 for a live re-enactment of the original, biblical holiday ritual: sacrificing a lamb.

Hundreds gathered in the Jewish Quarter to watch barefoot, white-robed priests slaughter, skin and roast a lamb on a makeshift altar and hear speeches by rabbis and a Likud Knesset member. The event was held in a public square outside the Hurva Synagogue, a stone’s throw from the Temple Mount, where priests conducted daily sacrifices in ancient times.

The event was an awkward reminder of the tight spot Benjamin Netanyahu’s government is in as it tries to balance the competing religious claims over arguably the world’s most volatile shrine. The government and its defenders have long been trying to debunk Palestinian accusations — deliberate lies, Israel argues — that Israel intends to build a third Jewish Temple on the site where the Al- Aqsa Mosque and the iconic Dome Of The Rock now stand. Unfortunately, events like the Passover re-enactment illustrate the growing influence within the government itself of Jewish activists who aim to do just what some Palestinians accuse them of.

The aspiration to rebuild the Holy Temple atop the sacred mount is a central tenet in Jewish religious tradition. As religious traditionalists grow in prominence and influence in Israeli society and government, so does enthusiasm for the Temple Mount. That puts them on a collision course with Muslims, for whom the mount and its mosque are their faith’s third-holiest shrine.

Zionism’s largely secular founders had no intention of rebuilding the Temple or of restoring animal sacrifice. But a minority of religious Zionists saw the rebirth of Israel as a step toward messianic restoration of the ancient kingdom, Temple sacrifice and all. The distinction between the two Zionisms wasn’t obvious to many Muslims, who suspected Zionism as an effort to restore the Temple atop their shrine. Extremists played on those suspicions to fuel nationalist fervor. But as secularism retreats in Israel, the suspicions surge. 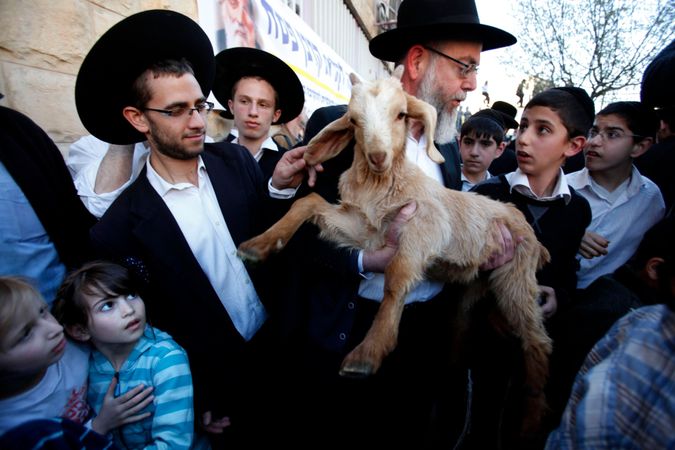 A member of the Temple Institute holds a goat in an enactment of the preparation for the renewal of the Passover sacrifice in the third Jewish Temple in 2012. Image by Getty Images

The April 6 ceremony was the 15th annual Passover re-enactment, and the first to take place inside the walled Old City, within shouting distance from the mount. Organizers had sought to hold the event in an archaeological park at the very foot of the Temple Mount, but police forbade it. Israel’s Supreme Court dismissed the organizers’ appeal.

In the days between the re-enactment and the eve of the actual holiday, April 10, police rounded up seven activists in the radical organization Hozrim Lahar (“Returning To The Mount”) on charges of planning to conduct a sacrifice on the Temple Mount itself, which would likely ignite Muslim fury. Individuals are detained nearly every year, trying to approach the mount with a goat or lamb in their arms, but this appears to be the first time authorities stopped an organized plot.

A coalition of organizations known as Halibah (a Hebrew acronym for “The Initiative For Jewish Freedom On The Temple Mount”) stages the re-enactment and lobby for Jewish prayer rights on the mount — now forbidden by the Muslim authorities that manage the site. The Jewish groups also work to prepare for the rebuilding of the Temple. Hozrim Lahar and its leader, Raphael Morris, are closely identified with the re-enactment ceremony.

The best-known coalition member, the Temple Institute (which receives some government funding), has been readying the gold Temple implements and priestly vestments described in the Bible, while also training kohanim, descendants of the original priests, in the fine points of ritual sacrifice.

The re-enactment has been gaining in popularity, attracting thousands of attendees and featuring appearances by Cabinet ministers. This year’s event was scaled down, at police insistence, to just a few hundred attendees and a single political figure, Yehuda Glick, a Likud Knesset member and founder of the Halibah coalition.

Permitting Jewish presence on the mount is actually a controversial matter among Israel’s Orthodox rabbinical authorities. The traditionalist Haredi rabbinate still upholds the centuries-old rabbinic ban on Jews even entering the Temple compound, for fear that they will tread on the long-forgotten spot where the forbidden Holy of Holies once stood. Traditionalists believe the Temple cannot be rebuilt until the Messiah comes and restores the ancient Jewish kingdom.

Religious Zionists maintain that the survival of the Jewish state against all odds proves that the messianic era is already underway and that Jews today should be working to restore the Temple.

Enthusiasm for visiting the mount swells around two Jewish festivals that in ancient times entailed pilgrimage to Jerusalem and special sacrifices: Passover in the spring and Sukkot in the fall. Palestinian protests swell at the same time. In September 2015, as UNESCO was debating resolutions declaring the Temple Mount a Muslim shrine, Jewish visits to the mount soared to record levels. Given the crowds and the charged mood, police informally eased enforcement of the ban on Jewish prayer at the site. Prominent among the thousands of Jewish visitors that month were Cabinet ministers and Knesset members from the ruling Likud-Jewish Home coalition, each accompanied by an entourage of aides and press.

Palestinian leaders responded with furious protests over what they claimed was a government plot to increase the Jewish presence in the sacrosanct area. Israel treated the Palestinian protests derisively, insisting there was no basis for the Palestinian suspicions. Hamas declared a “day of rage” October 9, the first day of Sukkot. The Muslim protests spurred several murderous stabbing and car-ramming attacks, beginning what came to be known as the “Stabbing Intifada.”

Prime Minister Netanyahu, tacitly acknowledging the causal interrelationship between Israeli and Palestinian actions, prohibited ministers and lawmakers visiting the mount as the crisis escalated. The police and military have gamely tried to contain fanatics on both sides. It’s an uphill battle, though. Protests from coalition members over the visit ban have been nonstop. Glick himself petitioned the Supreme Court to lift the ban just a week before the re-enactment ceremony.

Perhaps there was an unintended symbolism in the choice of the Hurva Synagogue as the venue for this year’s re-enactment. Hurva means “ruin.” It’s a variant of the word khorban (kh as in Khanuka), the special term for the destruction of the Temple and the 2,000-year exile. The Temple sacrifice, re-enacted last week in the shadow of the world’s most combustible shrine, is known in Hebrew as korban. Perhaps the coincidental homophony is meant to remind us that one can lead to the other.