Is Passover Broken Beyond Repair?

This shouldn’t surprise us. The Jewish community worldwide is broken into pieces. There’s no reason to expect our favorite Jewish holiday will be exempt. The festival mirrors the community that observes it. Right now we’re a community that’s marching in two opposite directions at once.

One side of the community observes Passover to recount the suffering and persistence of Jews in a hostile world, from ancient Egypt up to modern times and, we assume, into the future. For the other side, Passover is about expressing solidarity with victims of modern-day oppression by linking our people’s historic suffering with injustices done to others today.

The first type of Passover, the Jews-in-a-hostile-world version, looks pretty much like the Passover that Jews have celebrated throughout our two millennia of wandering. They’re not identical, of course. Through most of our history Jews saw the Egyptian bondage as a foreshadowing of their own suffering. Passover expressed our yearning to be liberated as our forebears were. Most of us today haven’t experienced anything similar. The holiday now serves to remind us of our humble roots. It also reaffirms our sense that we’re still history’s victims, even if we don’t look like it lately.

Then again, the Passover of the European exile wasn’t the original model either. The original Passover, the one commanded in the Bible, centered on sacrificing livestock at the Holy Temple in Jerusalem. It was only after the Babylonians and then the Romans demolished the Temple that the family dinner took center stage.

One unifying element in all traditional Passovers, ancient and modern, is the recitation of the traditional lessons of Passover: In each generation, each of us is obliged to see ourselves as if we personally had come out of Egypt. Liberation happens by divine miracle. In each generation they rise up against us to destroy us. And, as we tell the skeptical son: This happened to me, not to you.

The other Passover, the solidarity-with-the-downtrodden version, is a more recent phenomenon. Its key feature is a revising of the Haggadah text to spotlight modern-day struggles for liberation from bondage. These can range from the agony of the Holocaust and redemptive birth of Israel to civil rights, gender equity and, more recently, Palestinian rights. Sometimes these new narratives are woven into the text of the traditional Haggadah. Sometimes they replace it altogether. 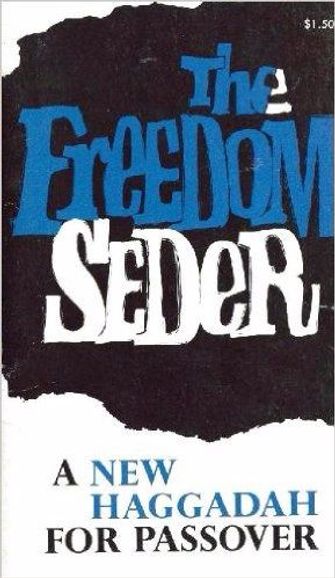 The transformation of Passover reached a turning point in the late 1960s. American society was reeling from the Vietnam War, the youth counterculture and the radicalization of the civil rights movement. The turmoil reached a climax in 1968 with the assassinations of Martin Luther King Jr. and Robert Kennedy. Across the ocean, meanwhile, Israel was finding itself transformed in the eyes of the world, following its victory in the 1967 Six-Day War, from a besieged outpost into a feared occupying power.

Among Jews, the upheavals of late 1960s were a watershed, the beginning of our division into two factions. One of the earliest signs of the split was the appearance of two Haggadahs that embodied the two opposing worldviews. One was the Freedom Seder, published in 1970 by left-wing guru Arthur Waskow. It updated the Passover message by putting black America’s freedom struggle at the center of the holiday narrative, drawing parallels between the Exodus from Egypt and the civil rights movement. For the first time, Passover’s main message was not the suffering of Jews but of others. It was the message of the Seder’s skeptical son turned on its head: These things happened to him, not to me.

Two years later, as if in reply to Waskow, came the Soviet Jewry-themed Haggadah “Let My People Go.” A traditional text with some new commentaries, its most memorable feature was the illustrations by physician Mark Podwal. Like Waskow’s Freedom Seder, it put modern events front and center. Unlike the Freedom Seder, it kept the holiday’s focus on Jews.

In the decades since, countless new Haggadahs have appeared, with and without the traditional text, focusing variously on gender equality, hunger, the environment and more. Each one tries explicitly to frame its contemporary cause as a modern version of the Exodus story.

The latest innovation, though, risks turning the Passover tradition on its head by connecting the Jews’ suffering in Egypt with the suffering of the Palestinians under Israeli occupation.

Some might see the analogy as a tad overdone. Certainly the Palestinians suffer under Israeli military rule. But it’s not the agony of Syria or Congo, and it’s not the suffering of the Hebrew slaves in Egypt.

In a way, though, the strength of the historical comparison is beside the point. Every analogy is imperfect. If juxtaposing our ancestors with modern-day victims helps draw our attention to injustices around us, that’s for good.

What’s off-kilter about Palestinian-themed Passover texts is that they put the Jews back in the center of the story — but as the oppressor, not the victim. If the Palestinians are today’s Hebrew slaves, then the Jewish state is the modern Pharaoh. Where the Freedom Seder and its heirs asked us to see our neighbors as comrades in suffering, Palestinian-themed Passover texts ask us to go a step further and see ourselves and our family as the wicked enemy.

It’s important to learn to see through Palestinian eyes. Learning to identify with the Palestinians helps us understand why they view Israel the way they do, and how Israel got into its current plight. It can help us to love Israel more, not less. Jews who love Israel should be trying to help Israel disentangle from its neighbors, not just for their sake but for Israel’s and ours.

If, however, we carry our solidarity to the point of viewing Israel as Pharaoh, as the enemy, then we undo whatever good we hope to achieve. When we make Israel our enemy, we make ourselves Israel’s enemy. When that happens, we lose any ability to contribute to peace. And we lose our family. We’re left broken — holidays, traditions and all.

J.J. Goldberg is the Forward’s editor-at-large.

Is Passover Broken Beyond Repair?