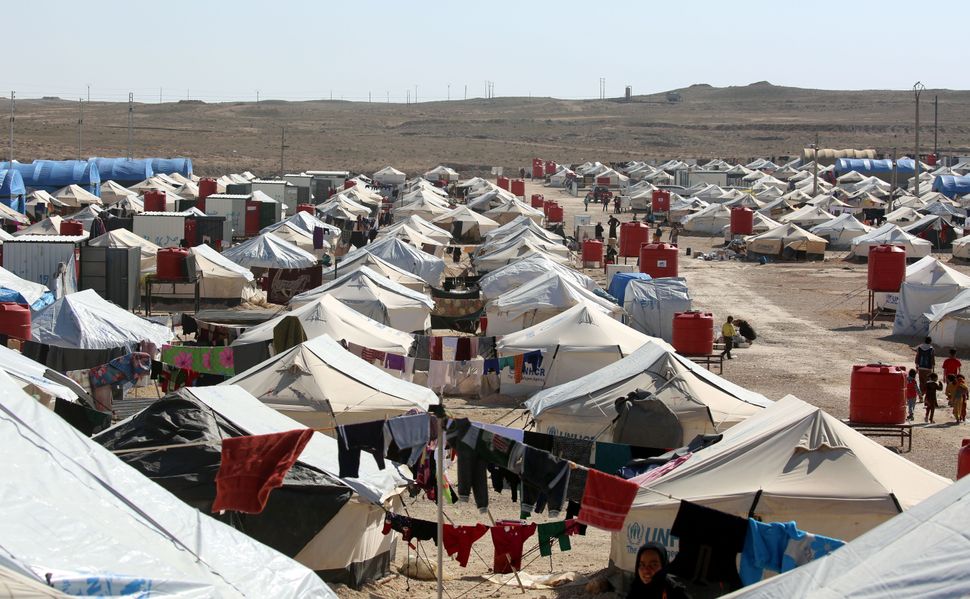 At my Seder growing up, there would come a moment when everyone would share a memory from leaving Egypt. “I didn’t want to leave my friends,” my older cousin would say. “I was afraid I left the fire burning in the house,” my mom, known for checking our stove before leaving for a trip, joked one year.

I lived in fear of when I’d be expected to participate. I couldn’t remember leaving Egypt; in fact, I had never been to Egypt. Over the years, I came to understand that the memories they shared were of a deeply imaginative, not literal, nature. It was my family’s way of living out the haggadah’s call for each person to see themselves as having personally left Egypt. Indeed, the power of the Seder is in reconnecting with our foundational experience of escaping persecution and setting out on the long and winding path toward freedom.

With more refugees in the world today than ever before in history, and the future of America’s commitment to being a safe haven to people fleeing persecution dangerously threatened, Passover could not be more resonant. As we reconnect with our own escape from evil and journey toward freedom, we also have an opportunity to recommit to the freedom of all people today.

On Yom Kippur we read the famous passage from Isaiah (58:6): “Is this not the fast I desire,” calling us not to go through the motions of a fast, but “to loosen the chains of injustice… and set the oppressed free.” I imagine Isaiah arriving at our Seder tables this year reminding us: “This is the Seder I desire, that you should eat matzah ball soup and sing ‘dayenu,’ yes. But also that you should set the oppressed free.”

This year we must make our Seders real and recommit to helping those now fleeing persecution and to ensuring that America remains a country true to its foundational values of welcome.

The day President Trump issued an executive order banning refugees from several Muslim majority countries from entering the U.S., I sat in a frigid, damp tent in Lesbos, Greece, visiting families fleeing Syria, Iraq and Afghanistan. One woman tearfully told me of her narrow escape from Syria with her toddler daughter and injured husband. She recounted the three times they tried to flee, thwarted at first by police firing bullets at them as they ran toward the Turkish border. When they finally arrived, it took three more attempts to cross the sea by dinghy to finally reach Greece.

When I met them, they were waiting in the Kara Tepe refugee camp – free from their oppressors, but not yet free to begin rebuilding their lives. What would become of them, the woman asked, if the nations of the world closed their doors?

The Jewish community needs to fight to ensure that the United States remains a place where such families can find safety, rebuild their lives with dignity, and become part of our great nation.

Over the past few weeks, Jews across the country have shown they’re ready for that battle. Together, we’re raising our voices on behalf of refugees, and we’re being heard. HIAS just won an injunction in the federal court case we’ve brought against President Trump; synagogues nationwide are meeting with their local representatives calling on them to oppose the order; and thousands of Jews have taken to the streets to advocate for refugees.

These are great successes, but the road ahead is rutted. The Trump administration will do all that it can to close America’s doors to refugees, particularly Muslims, and we need to prepare ourselves for the long haul. This Passover, let us renew our energies, and fortify ourselves for the journey.

This year as my own family shares personal “memories” from leaving Egypt, may we identify with those now fleeing persecution. Across the country as we share stories of our past and others’ present, may we recommit to ensuring that our nation remains a place where people running from danger can find safety.

May we draw strength from being with family and friends, enjoying familiar foods, and remembering deeply what it was like to leave Egypt and find renewal for the long journey. Let us rise up from our Seder tables fortified for the holy and urgent work ahead. Nothing less than human lives and the future of our nation are at stake.

Rabbi Jennie Rosenn is the Founder and CEO of Dayenu: A Jewish Call to Climate Action