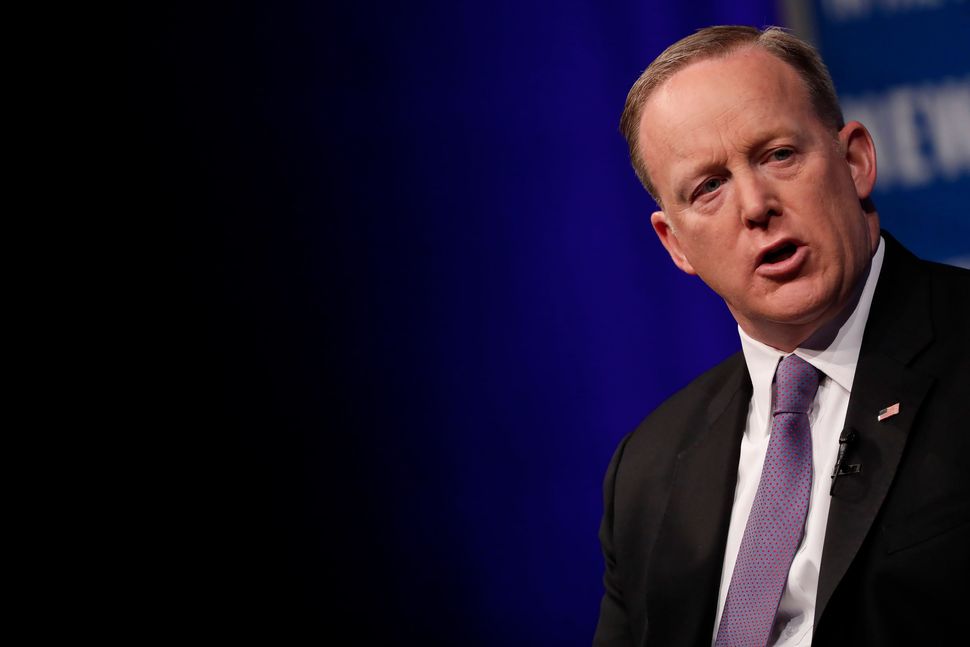 Jews emerged from the Passover holiday to learn that Sean Spicer, the malaprop-spouting, reporter-bashing White House press secretary, had managed to outdo himself with a barrage of Holocaust ignorance (to put it charitably).

Yes. Though Spicer has apologized, and some of his apologists have insisted it was simply a “gaffe,” in fact the misstatements point to a profound ignorance of the condition of American Jews in particular, and minorities in general.

“Gaffes” like Spicer’s reveal biases which may be unknown or even unconscious. Sometimes they’re just slips, but sometimes not, and you have to look to content and context to determine which is the case.

So let’s do that, content first. As you surely know by now, Spicer began by arguing that Syrian President Bashar al-Assad was worse than Hitler in some ways, because Hitler never used chemical weapons. In an attempt to explain his comments, Spicer dug himself even deeper, saying that Hitler never used chemical weapons against his own people, as Assad has done, despite what went on in “Holocaust Centers.”

Let’s focus on three “tells” in that series of idiocies.

Finally, and most important, is Spicer’s statement that Hitler never gassed his own people. Again, I get that Spicer was thinking of the battlefield, but once again, this “mistake” reveals a profound misunderstanding of the Holocaust, ethnic identity, citizenship, and belonging. His misstatement confirms Hitler’s view that the Jews were not Hitler’s people – they weren’t Germans, they were Jews.

As my friend Zach Teutsch just wrote an impassioned rebuttal to this calumny in Vox, I’ll refer you there rather than belabor the point about how hurtful, dangerous, and terrifying such statements are.

Quite separate from the question of whether Spicer deserves firing, these comments say much more than he’s in over his head. They tell us, at the very least, that he is utterly clueless about the experience of a minority targeted with genocide, and that he is wholly in an insular white-male-dominated conservative space in which it’s easy to be so clueless.

Of course the comments may be more than that as well. They may well indicate a deeper affinity with white supremacists. But there’s no evidence for that, and it’s unfair and unwise to jump to such conclusions.

So let’s look at context.

Yes, of course, the administration also includes Jared Kushner and other American Jews. It’s not monolithic. But surely there is a strain within it that has communicated quite clearly that Jews, like Mexicans and Muslims and others, are an out-group. It’s that strain, more than President Trump in particular, that is so disturbing.

Some have said that the Trump administration’s incompetence will save us from its malevolence. They point to the healthcare debacle as an example.

But what if the administration’s incompetence is, itself, a form of malevolence? At a certain point, whether someone is maliciously deceptive or stupidly ignorant becomes irrelevant. The effects are the same. Just ask the civilians and allies in Afghanistan, Syria, Iraq, and Yemen who have been killed by U.S. “friendly fire” in the last month.

Now, Spicer came to the White House with far better qualifications than some of Trump’s other cabinet, such as Ben Carson or Betsy DeVos. Spicer served as communications director of the Republican National Committee for five years. He’s Reince Priebus’s man, not Steve Bannon’s.

And yet, both his ignorance and his malevolence have been astonishing. In his very first press conference, Spicer lied about the size of the audience at Trump’s inauguration, and then falsely accused the press of manipulating photographs of it.

Was that incompetence or malevolence?

Since then, Spicer has mispronounced the names of multiple foreign leaders: Canada’s “Joe Trudeau,” Australia’s Malcolm Trumbull. He has castigated the press for calling the travel ban a travel ban, despite Trump’s own statements in support of a travel ban. With a straight face, he said that Republicans were cooperative when it came to Democrats’ judicial nominations, despite the 2016 Merrick Garland fiasco and an appalling low confirmation rate during the Obama administration. Incompetence? Malevolence?

At a certain point, the dumb bully is both dumb and a bully. He’s dangerous either way, spreading falsehoods, attacking the vulnerable.

Make no mistake: the western world is turning backward right now, toward primal and primitive emotions of tribalism, chauvinism, and nationalism. Donald Trump is part of that, and Sean Spicer is part of that.

Jews never thrive when such forces are emboldened. Those who believe that Trump’s (or Kushner’s) support for Israel’s settlements (themselves part of the global rightward turn) is more important than these far more profound and deep trends are naive, foolish, and short-sighted. They are selling the birthright of liberal democracy for a few acres of West Bank porridge.

I don’t know whether Sean Spicer is ignorant or malevolent. But I know that either way, he is part of a global trend that terrifies me.
No, “they” are not coming for “us” primarily. But we Jews will not escape their wrath.