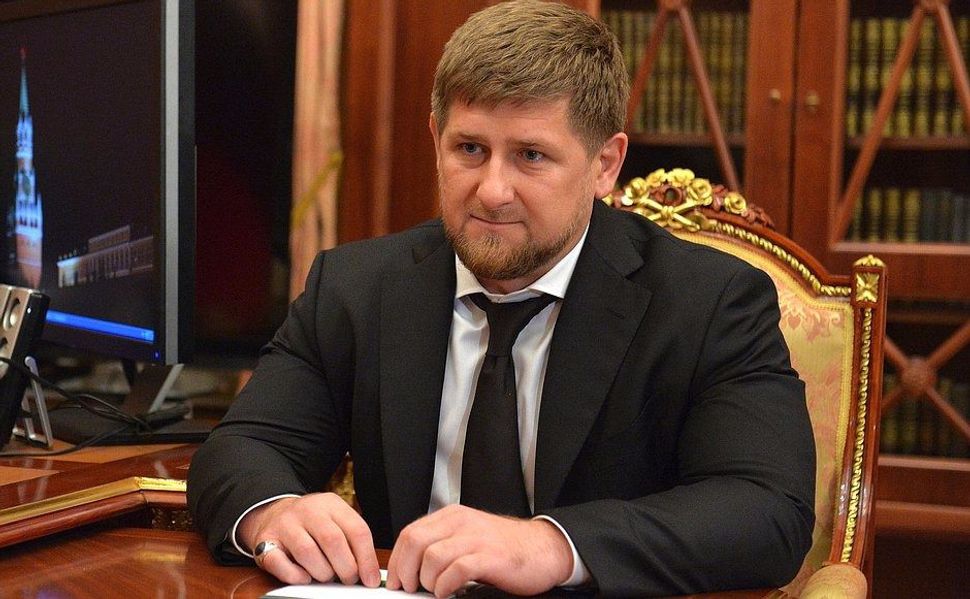 The matzah crumbs are still on the tablecloth on the dining room table.

The leftover charoset still sits in the refrigerator.

The haggadot from the seder still sit in a corner of the kitchen counter.

The text from the haggadah cries out to us: “In every generation, a person must see himself or herself as if he or she had gotten out of Egypt.”

Tell that to gay men in Chechnya. They are living in a modern Egypt. Earlier this month, the Russian newspaper Novaya Gazeta reported that police in that predominantly Muslim republic have rounded up more than a hundred men suspected of homosexuality, and sent them to internment camps. Gay men have been tortured with electric shocks. Some have been beaten to death.

In Chechnya, this is business as usual. Intense and rampant homophobia is part of the culture, and President Razman Kadyrov (pictured above) reportedly ordered the mass arrest. LGBT people live with a dual danger: being attacked by civil authorities, and becoming victims of honor killings by their own relatives.

On April 7, the State Department released a statement: “We are increasingly concerned about the situation in the Republic of Chechnya, where there have been numerous credible reports indicating the detention of at least 100 men on the basis of their sexual orientation.”

State Department spokesperson Mark Toner continued: “We are deeply disturbed by recent public statements by Chechen authorities that condone and incite violence against LGBT persons. We urge Russian federal authorities to speak out against such practices, take steps to ensure the release of anyone wrongfully detained, conduct an independent and credible investigation into these reports, and hold any perpetrators responsible.”

If this is the first time you’ve heard about this, here is why. The reports are coming from the British media: the Telegraph, the Guardian, and the Daily Mail. But there has been limited coverage on CNN, NBC, and the New York Times.

But, you will find almost no Jewish coverage of this horror – with the notable and noble exception of Rabbi Gil Steinlauf of Adas Israel Congregation in Washington, DC.

But this Passover, I am struck by another disturbing reality: Ignorance. Of course, we are living in times where our news cycle is overwhelmed with rising threats over Syria, North Korea and Russia. At home, our media is beset over the latest scandal du jour in connection with the presidency. It is indeed very difficult these days to notice what is happening in a small republic in the north Caucasus mountains.

So, why the overall silence?

On the one hand, let’s be fair: Passover got in the way.

There is a second reason. Perhaps we are simply burnt out — distracted by the reports of sarin gas in Syria, and White House press secretary Sean Spicer’s problematic interpretation of the Holocaust.

But, there is a third, even more cynical possibility.

The perpetrators of the roundups in Chechnya are Muslims. Could it be possible that, with the laudable and growing American Jewish efforts to open up dialogue with Muslims, that we simply don’t want to go there?

That said: Muslim leaders, especially in the United States, need to protest this unfolding tragedy.

And, of course, so must Jewish leaders.

Over the past two weeks, we have screamed about Syrian Bashar al-Assad’s use of sarin gas.

We have screamed about Spicer’s failure to understand the use of poison gas during World War Two. Our Shoah radar is working very well.

Passover is over. Yom HaShoah (Holocaust Remembrance Day) is coming. This would be the precise time for us to remember that the Nazis persecuted homosexuals. They raided gay meeting places. They closed Magnus Hirschfeld’s Institute for Sexual Science in Berlin (portrayed poignantly on Transparent). They sent gay men to the concentration camps.

To this day, we simply do not know how many gay men died in the camps.

What is happening in Chechnya, according to the Daily Mail, is the first public round up of homosexuals since gay men were interned in the Nazi concentration camps.

This year, on Yom Ha Shoah, yes — let us remember the gay men who died in the camps.

And let us remember, as well, the gay men who are dying in the camps.

Jeffrey Salkin is the senior rabbi of Temple Solel in Hollywood, Florida. His new book is “The JPS B’nai Mitzvah Torah Commentary.” (The Jewish Publication Society)