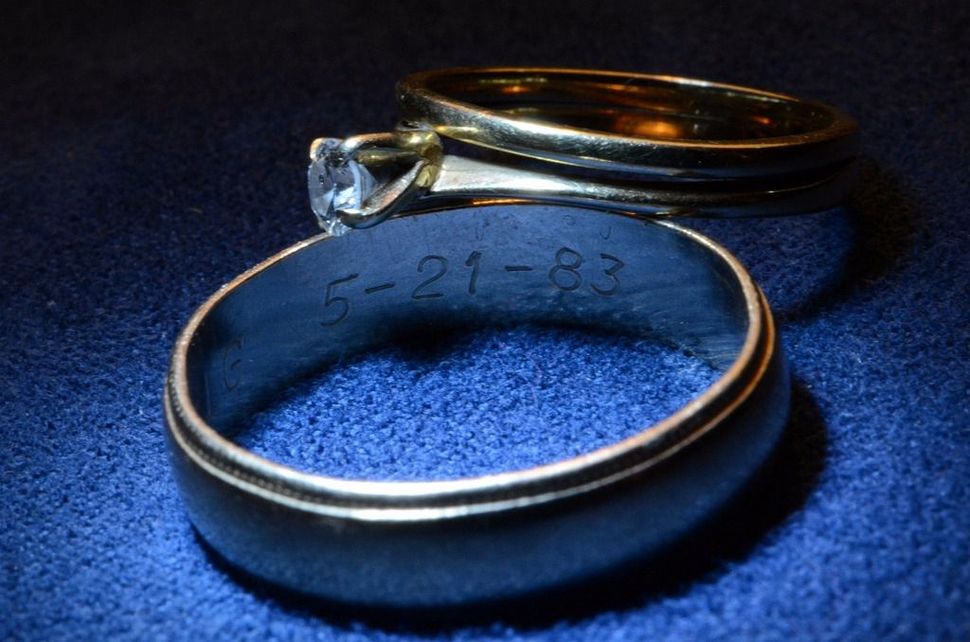 Perhaps the most significant aspect of the problem of intermarriage is that for many Millennials, it is not a problem at all. As a 2013 Pew Study showed, intermarriage has become a normative dimension of the American Jewish experience. In response, Chancellor of the Jewish Theological Seminary Arnold Eisen penned in 2014 an op-ed in The Wall Street Journal in which Eisen suggested that Conservative rabbis begin a process of soft proselytizing of non-Jewish spouses of intermarriages. In some way Rabbi Cosgrove’s essay is an extension of Eisen’s proposal. In my response to Eisen’s essay [“Should Rabbis Proselytize Non-Jewish Spouses?” Zeek August 20, 2104] I challenged Chancellor Eisen on a number of fronts, one being that conversion is far too significant and intense an act, for anyone, to serve as a solution to a Jewish problem.

I offer a similar challenge to Rabbi Cosgrove.

In brief, Rabbi Cosgrove’s conversion solution is that we do two things: first, we minimize criteria for conversion, perhaps even taking it out of any institutional rabbinic framework and leaving it solely to the officiant rabbi. In his view, immersion in a mikveh and a small dose of Jewish knowledge may suffice. This approach, of course, subverts the rabbinic model of dissuading the potential convert. But I am in principle fully on board with this subversion. Given present circumstances, why make conversion to Judaism difficult? Secondly, however, Rabbi Cosgrove suggests we mandate that both bride and groom, regardless of their status (Jew, non-Jew, Patrilineal Jew, etc.) immerse in the mikveh before the wedding as a kind of “conversion in doubt” (gi’ur b’sakef), which is a viable halakhic category used historically for different purposes. By this logic, the Jew would submerge in the mikveh as a prefatory act for marriage, while the non-Jew would do so as an act of conversion. Here I disagree with Rabbi Cosgrove in both principle and practice.

To support his case, Rabbi Cosgrove brings the example of the mass immigration from the Soviet Union to Israel in the 1980s where such a proposal of “conversion in doubt” of all Soviet immigrants was suggested and later rejected by the state of Israel. Another example he could have brought was the Ethiopian immigration to Israel. In that case, the Israeli Rabbinate tried to implement “conversion in doubt” until the Ethiopian immigrants resisted. But those are not comparable situations. In the Israeli cases mentioned, conversion was an administrative act to determine the status of citizenship (Law of Return or no Law of Return).

It was, to my mind, a cynical move to solve an administrative problem that was brought about largely due to the complex nature of church and state in Israel. Conversion is arguably one of the most powerful things an individual can do. In Judaism, it constitutes what might be considered a “magical” biological transformation. It ostensibly erases pedigree. From the traditional halakhic and liturgical perspective, one’s biological parents are no longer considered to be one’s parents. And once one converts, one can never reverse that status. One is a Jew for life. This is powerful stuff and thus should not be deployed to solve an administrative problem, nor do I think it should be used to solve an institutional problem (e.g., of The Conservative Movement), a situational problem (intermarriage), or the problem of a rabbi’s divided conscience.

Yet one can only imagine the anguish of a pulpit rabbi who has to deal with the countervailing forces of exogamy and halakha on a daily basis, juggling a couple’s experience of love with a tradition that prohibits that love receiving official confirmation. In short, the personal touch Rabbi Cosgrove offers his readers in his essay is heartfelt and understandable. How can a rabbi cater to his or her constituents if increasing numbers of those constituents are acting in a way that the rabbi cannot condone? Of course this problem is not new, congregants acting against rabbinic authority is arguably as old as Judaism itself. But there seems to be a line-in-the sand attitude about intermarriage that did not exist around Sabbath observance, abandoning of family purity laws, or kashrut even though, as my colleague Christine Hayes at the Shalom Hartman Institute of North America has shown, historically intermarriage may have been viewed as less a covenantal breach than those other transgressions.

Today, the volume may be turned up so high on the question of intermarriage because the contemporary American Jewish experience of integration and assimilation has put us in high-alert survival mode. In survival mode, a Jew can be a Jew if he eats a cheeseburger on Yom Kippur, but he undermines Jewish survival if he chooses to, say, marry Margret O’Malley. So we give up on the cheeseburger and focus on O’Malley. In survival mode, we (or I should say, women) become little more than reproductive machines, what matters is what comes out of a woman’s womb. We have created a pro-natalist Judaism.

Unfortunately, what results from this focus on survivalism is that Judaism’s greatest assets are sometimes cast aside to insure that one’s grandchildren will be able to call themselves Jews even though they may no longer know, or care, what that means. Judaism is quickly becoming a tool for the survival of the Jews rather than an ancient tradition that offers wisdom toward a meaningful life. Here I agree with Jacob Neunser when he stated in the 1980s, “I want more Judaism and less Jewishness.” And I think it is safe to assume that Rabbi Cosgrove would agree. Be that as it may, practically I understand that Rabbi Cosgrove is certainly situated in a breach, and it is from that breach that he offers his solution.

What would we call this new category of convert Rabbi Cosgrove suggests? Converts as problem solvers? But they are not solving their own problem, they are not converting for personal or material gain. They are not converts of convenience. They are converting to solve our problem, that is, the problem of American Jewry and our collective conscience. We would become converters of convenience. But at what price? I fear we would be selling out conversion, a deeply religious, spiritual, and life commitment, so that rabbis can feel better when they marry two people one of whom isn’t, or wasn’t, Jewish. A dunk in the mikveh to make the rabbi feel like he is not acting against his own conviction? The cynicism here should not be directed toward the convert, but toward us. Rabbi Cosgrove even goes as far as saying, “The Conservative Movement should be the movement of conversion; that should be our mission.” But this mission is not because we think people should become Jews; that would be a mission of conviction. Rather, it would be to my mind a self-serving mission only to convert people who are marrying Jews; that is a mission of convenience, our convenience.

Don’t get me wrong. I am not against conversion. Quite the contrary, if someone deeply wants to convert to Judaism, if someone feels that Judaism is their path as an act of conviction I am in favor of lowering the standards to make it as easy as possible. Like the late Rabbi Harold Shulweiss I believe Judaism has a lot to offer and should be presented as an option in America’s spiritual marketplace. But not only for non-Jews who are planning to marry Jews. There is no conviction in that. I do not think it is fair, or spiritually refined, to ask the non-Jew to become a Jew in order to solve a Jewish problem. Or to allow us, as rabbis, to sleep at night. To do so is to make conversion into an instrument and the convert into a tool to benefit us. I fully appreciate Rabbi Cosgrove’s recognition of the problem and his investment in finding a solution. But Judaism, as well as conversion, has to retain its integrity. I’m afraid we will have to continue to compromise our conscience, one way or the other, until we find a better solution. For us to become converters of convenience is not that solution. Let the conversation continue.

Shaul Magid is the Jay and Jeanie Schottenstein Professor of Jewish Studies in the Borns Jewish Studies Program at Indiana University/Bloomington, a Kogod Senior Research Fellow at The Shalom Hartman Institute of North America, and the rabbi of the Fire Island Synagogue in Sea View, NY.