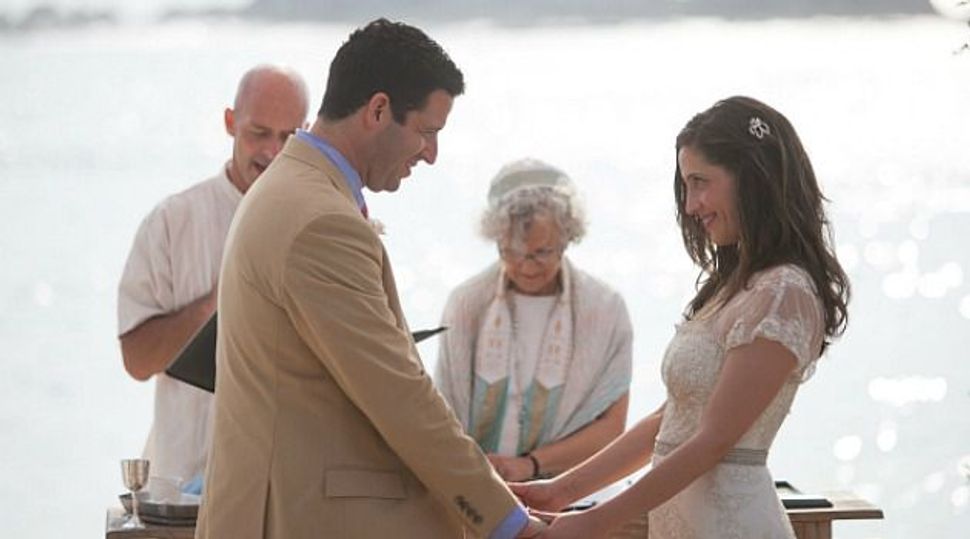 They are in their 20s, were raised in families with only one Jewish parent, do not associate themselves with any Jewish denomination and are likely to hold liberal political views.

This is the profile of one in five young American Jews and, according to a new analysis of data collected by the Pew Research Center in its 2013 survey of American Jews, they feel deeply alienated from Israel.

The analysis, prepared for the Forward by Steven M. Cohen, a professor at Hebrew Union College-Jewish Institute of Religion, provides the factual foundation for a widespread notion among Jewish scholars and communal activists that many young American Jews do not share their parents’ sympathy toward Israel and, in many cases, feel alienated by the Jewish state. Intermarriage has emerged in the study as a key indicator of second-generation alienation from Israel.

But while the numbers are clear, the conclusions they point to are anything but obvious. For Cohen, who says he is “pessimistic” and sees the numbers as “bad news,” the data paint an alarming picture of a growing problem that eventually could imperil ties between American Jewry and Israel. But others see this problem as a snapshot of a reality that is already changing, and for the better.

“We are a very far cry from the discourse on distancing from Israel we had two to three years ago,” Theodore Sasson of Brandeis University said. He argued that connection to Israel is, according to many indexes, trending upward.

Cohen, a leading sociologist who researches the American Jewish community, has defined in his analysis a new category that combines detachment from Israel and opposition to the country’s policies. “When it reaches 20% of Jews under the age of 30, this is huge,” he said. “There is a real leap in various forms of alienation from Israel.”

The category of “Israel-alienated” includes members of the Jewish community who both indicate having low attachment to Israel and think the United States is too supportive of it. Combining these two aspects, Cohen explained, provides a look at those in the community who are not only critical of Israel, as are many Jews who do not agree with the positions of the government in Jerusalem, but also reached this position without having any attachment to the Jewish state.

The analysis found that a fifth of non-Orthodox young Jews could be categorized as “Israel-alienated.” In general, younger Jews tend to be less attached to Israel and less supportive of Israel in the context of its conflict with the Palestinians.

The portrait of Israel-alienated American Jews that emerges from the data analysis includes several main characteristics: They are young (18.8% of Jews between the ages of 18 and 29 feel alienated from Israel) and they are more likely to be unaffiliated with any denomination within Judaism (14.9%), liberal in their politics (21.6% describe themselves as very liberal) and have grown up with only one Jewish parent. Of those raised in interfaith families, 19.4% have low attachment to Israel and think America is too supportive of it. Only 4.4% of American Jews raised with two Jewish parents share these sentiments.

Danny Hirschel-Burns, who was raised in an interfaith family in East Lansing, Mich., typifies the Israel-alienated demographic Cohen has distilled from the Pew data. “I never had a strong pro-Israel voice in my life,” the 22-year-old Swarthmore College senior told the Forward. He did not attend synagogue or any sort of Jewish school. Judaism was discussed mainly through stories told by his grandparents, he said, but Israel was not part of this discussion.

Hirschel-Burns began to take interest in Israel only in college, where he joined Students for Peace and Justice in Palestine, a group devoted to advocacy for Palestinians. Had he been exposed to Judaism and Israel growing up, he said, it might have given him a different initial perspective on Israel, “but I don’t think my views today would be different.”

Similar views on Israel among young American Jews have been detected in polls for almost three decades, but the recent analysis pinpoints the reasons for detachment and alienation, and points to interfaith marriage as a key indicator of resentment toward Israel. “The rate of alienated remained the same, but there is a change in their characteristics,” Sasson said. “A couple of decades ago they came from homes with two Jewish parents, and now they are coming from intermarried families.”

Children of interfaith families, experts explain, show less engagement in all aspects of Jewish life, including attachment to Israel. But while there was a relatively small decline among children of interfaith parents in participation in certain religious ceremonies (Passover Seders, for example), their feelings toward Israel demonstrated a greater drop.

“The non-Jewish parents have an understanding of Judaism that comports with Christianity, and that’s why going to synagogue makes sense to them” Cohen said. On the other hand, he added, “there is no counterpart in Christianity to the idea of an ethnic state.”

The Jewish community’s evolving attitude toward intermarriage could, however, hold promise for forging a better connection between these younger Jews and Israel.

“Organizations and synagogues are becoming more welcoming to intermarried families,” said Sarah Bunin Benor, a Jewish studies professor at the Los Angeles campus of HUC-JIR. This trend, she noted, will allow children of interfaith families greater access to the community and can influence their views on Israel: “They now have more possibilities to connect, and this means also connecting on Israel.”

The Reform movement has largely embraced interfaith families in its synagogues, and in many cases will agree to marry couples with only one Jewish partner. Conservative Judaism, while still opposed to officiating interfaith weddings, has also welcomed non-Jewish members to its synagogues and communal events.

This growing acceptance of interfaith families can also be seen in Birthright programs, the flagship project connecting young American Jews to Israel. Thirty percent of Birthright participants come from families with only one Jewish parent, according to Leonard Saxe, director of the Cohen Center for Modern Jewish Studies at Brandeis University.

Birthright, which has brought 350,000 young people to Israel over its 15 years, could hold the key to understanding the debate over how to interpret the data on young Jews’ alienation from Israel. Supporters of the program view it as a game changer whose impact has yet to fully show up in the communal statistics.

“Everything we see in this age group indicates growing attachment to Israel, and this is mainly because of the opportunity to visit Israel,” Saxe said. Programs like Birthright and Masa Israel Journey are the reason, he explained, that attachment to Israel is slightly higher among young Jews in their 20s compared with those in their 30s, who have fewer opportunities to participate in the Israel trips. Sasson believes that Birthright has led to many young Jews’ “over-engagement” with Israel, which can “offset some of the loss of engagement among intermarried families.”

But the available data suggest a more complicated story on the real impact of Birthright. According to the recent analysis, alienation toward Israel among those who never visited Israel hovers around the 20% marker. This figure drops only slightly among young American Jews who have visited once. A real decline in alienation is seen only after a second trip to Israel, or after living there for a while.

Also, while researchers agree that intermarriage is the leading indicator for alienation from Israel, political views still play a role. The data analysis shows a steady increase in negative feelings toward Israel that correlates with the spectrum of conservative to liberal views. The alienation rate among the self-described “very conservative” is less than 1%, while among the “very liberal” it reaches 21.6%.

In 2010, columnist and author Peter Beinart rocked the communal world with an article and subsequent book suggesting that young Americans are alienated by policies of the Israeli government and that their liberal viewpoint is a key reason for detachment from the Jewish state. Cohen responded in an article claiming that it was intermarriage, not liberalism, that is driving young American Jews away from Israel. Now, he says, the data shows that both factors explain the drift.

“Beinart was ahead of his time,” Cohen said. Cohen stressed, however, that the numbers still show intermarriage is more significant than politics in driving young Americans away from Israel.