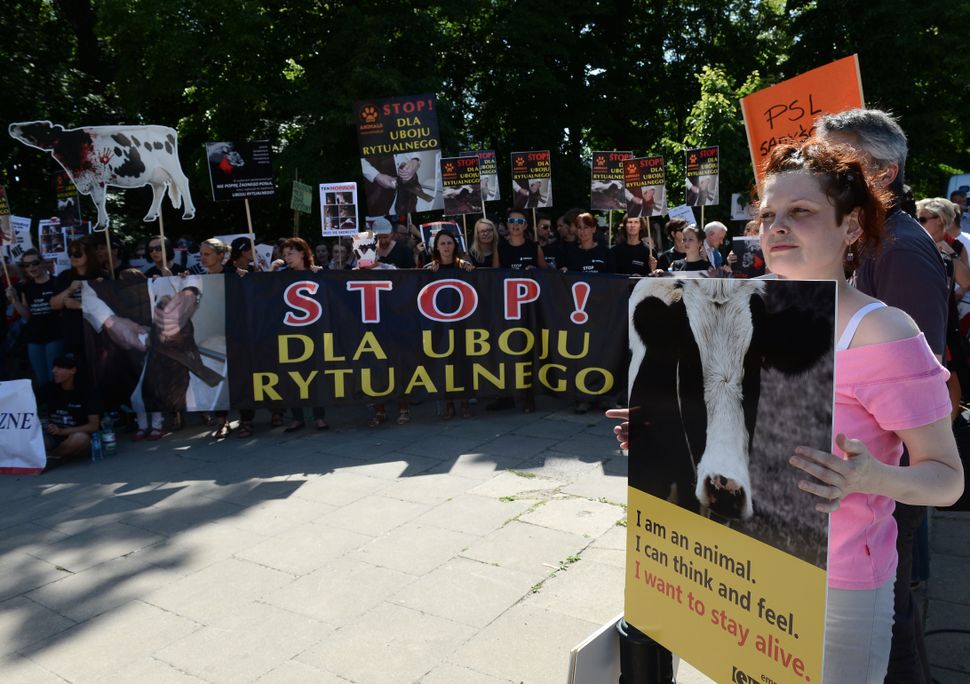 Ritual slaughter ban legislation is often passed under the guise of animal welfare concerns. The claim is that stunning animals with a bolt before slaughter is more humane than a quick cut to the throat. Of course this isn’t true. In fact, a Veterinary Record report assessing the “neurophysiological studied relevant to the assessment of pain” concluded that ritual slaughter is a “painless and humane method.”

Even if there is slightly more pain associated with a quick cut to the throat from a razor sharp knife versus stunning with a bolt, religious rights should override any such difference.

But beyond bogus animal welfare concerns is the hypocrisy underlying these laws.

The very same Flanders region that will be impacted by the Belgian ritual slaughter ban also happens to breed and gas 160,000 mink every year. These mink are locked in small barren ‘shoebox’ cages. Gassing is certainly crueler than ritual slaughter. And the mink are killed for fur, unlike revered religious ritual slaughter where the meat is eaten according to thousands of years of tradition. Denmark, another country that in recent years banned ritual slaughter, is one of the largest mink pelt producers in the world.

Sport hunting animals such as deer, rabbit, fox, wild boar, and shooting waterfowl and upland game birds is also permitted in Belgium. Hunting with guns and hounds is most common. In other words, you can blast a flying bird with shotgun pellets and shoot a mammal in the chest usually (often severely wounding it before death), but quickly slitting a restrained animals throat is somehow inhumane. Also, shouldn’t protecting religious liberties be at least as important as preserving sport hunting traditions?

Perhaps Belgians and others should take a cue from the United States where animal cruelty exemptions for ritual slaughter have been upheld as constitutional, and also where the Humane Slaughter Act defines Jewish and Muslim religious slaughter as a humane method of killing animals for food.

Granted, it might be ethically consistent to prohibit all animal slaughter in the name of animal welfare. PETA and other groups advocate this. But to target a specific method of slaughter that accounts for a fraction of factory farm animal deaths is selective and deeply troubling.

If animal welfare is the concern, then letting all animals live and not breeding them in overcrowded factory farms (focused more on profit than humane conditions) should be the goal. The brunt of animal cruelty takes places well before the few moments it takes an animal to die from a knife slitting its throat or a captive bolt gun stunning.

While the intent today may not be anti-Semitic or Islamophobic, the underlying message these bans wrongly send is that these ancient ritual slaughter methods are cruel, primitive and outdated. It’s ironic that years before modern animal welfare laws, both Islam and Judaism required compassion and mercy toward animals.

If harvesting meat through factory farming and sport hunting is allowed, ritual slaughter should also be permitted. Shooting animals and gassing animals for fur is far more inhumane than any ritual slaughtering methods. If animal welfare is the concern, Belgians should seek to address widespread, cruel and unsanitary factory farming conditions which animals are raised and bred under, not targeting ancient religious rights.

Eliyahu Federman has written for USA Today, New York Daily News, The Huffington Post and others, including on animal rights related issues. Follow him on Twitter, @elifederman.