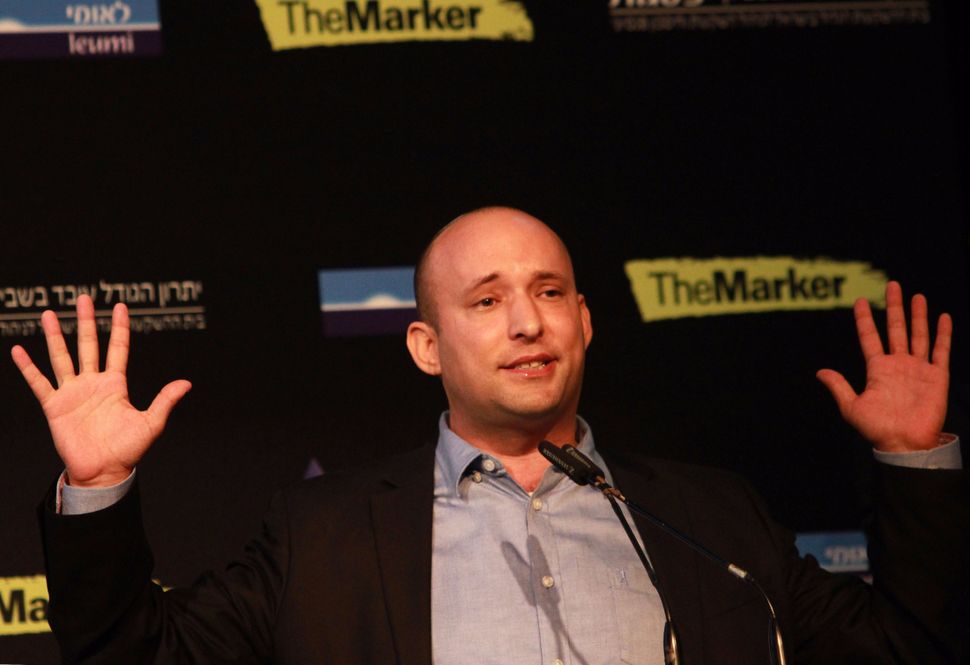 Image by Photo of Naftali Bennet by Getty Images

The other day, 12,000 Jews from all over the world marched from Auschwitz to Birkenau on Yom Hashoah (Holocaust Remembrance Day) as part of the annual pilgrimage known as the March of the Living. Students spend a week in Poland and then another week in Israel; they are at Birkeanu for Hom Hashoah and in Jerualem for Yom Haatzmaut (Israeli Independence Day).

At Birkenau, seated between gas chambers BII and BIII, they heard stirring addresses from Auschwitz Survivor former Ashkenazi Chief Rabbi Israel Meir Lau, from Elisha Wiesel, son of the legendary Elie Wiesel who spoke with simplicity and eloquence of his father’s legacy and from a young Mexican student who spoke from the past to his generation. Among those seated in the audience were the Ministers of Education from nine European countries.

Israel was represented by its Minister of Education Naftali Bennet, who preceded in his brief remarks to make the most elementary of historical mistakes on the Holocaust — mistakes that may have not been detected by the large audience but surely were noted by his fellow ministers and by survivors and historians, Holocaust educators and Auschwitz officials. He showed himself to be singularly ill-informed about the Shoah.

I confine my critique to the history, not his polemics. Daniel Patrick Moynihan once said everyone is entitled to their opinion but not to their own set of facts. Is it too much to ask that Israeli officials get their history right?

Bennet spoke about the ghettos in Warsaw and Lodz but also in Paris and Vienna. Surely the Ministers of Education of France and Austria wondered how little does this man know. There were no ghettos in Paris or Vienna. What made the remarks even more inappropriate is that the Bennet correctly criticized those French who deny the responsibility of the French Railroad for system for the deportations of the Jews, a not-so-veiled reference to Marie Le Pen. But the level of his disinformation undermined his criticism.

What Bennet clearly does not know is that as late as June 11, 1944, David Ben Gurion and the Yishuv Cabinet voted not to request that Auschwitz be bombed. The minutes reveal their reasoning. “David Ben-Gurion, chairman of the executive, said: “We do not know the truth concerning the entire situation in Poland and it seems that we will be unable to propose anything concerning this matter.” What concerned Ben-Gurion and his colleagues was that bombing the camps could cause the death of many Jews or even one Jew.

Although no specific documentation reversing the decision of June 11 has been found, by July, Chaim Weizmann and Moshe Shetok met with Foreign Minister Antony Eden and forcefully called for bombing. Presumably, they had read except of the Auschwitz Protocols, the Vr’ba Wetzler report that delivered real information on the gassing at Auschwitz and now understood that it was worth killing innocent Jews to destroy the infrastructure needed for their annihilation.

Don’t get me wrong. I have co-edited a book and hosted an international conference on the bombing issue and I believe that Auschwitz should have been bombed but before Israelis castigate the Allies, it is time that they examined their own record during the Shoah and at least get their history right.

Bennet was not alone. Last year, at the same ceremony, the Minister of Justice Ayelet Shaked made similar mistakes. She even had the audacity — and the staffing incompetence — to give the same speech twice to an overlapping audience, making elementary mistakes to an academic audience composed of some of the world’s most sophisticated Holocaust and legal scholars.

Permit me to ask: Can’t senior Israeli officials have their remarks to major international audiences fact-checked by the distinguished scholarly staff of Yad Vashem? There is enough Holocaust denial in the world, enough misrepresentation and disinformation that we don’t need some of the most senior officials of the Israeli government speaking the name of the Jewish people, most especially at the sacred – anti-sacred – site of Birkenau making elementary mistakes.

Michael Berenbaum is director of the Sigi Ziering Institute: Exploring the Ethical and Religious Implications of the Holocaust at the American Jewish University, where he is also a professor of Jewish studies.