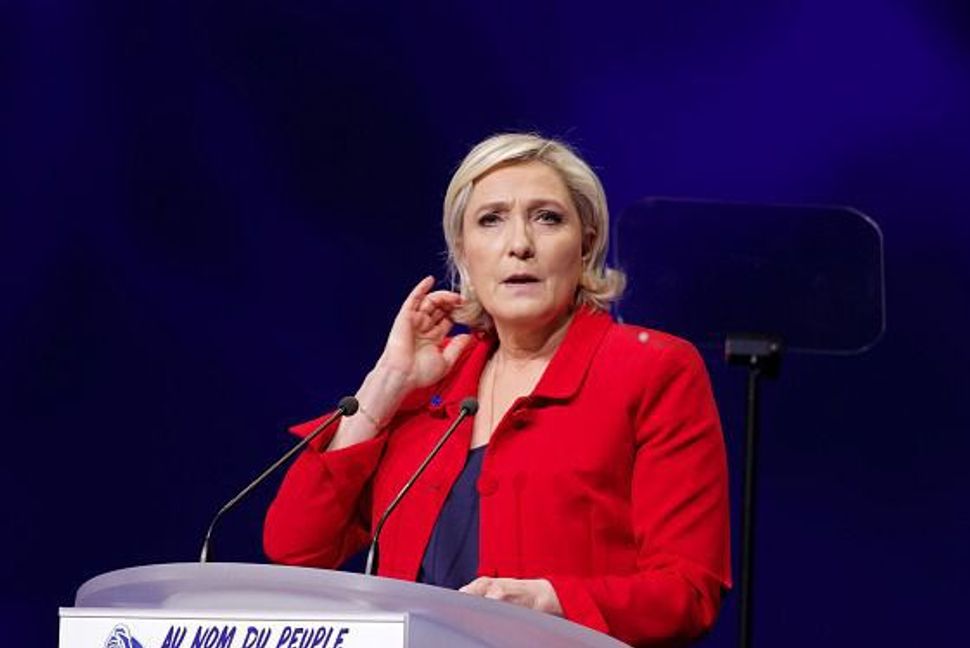 For the first time since the French Vichy Government teamed up with the Nazis in the 1940s, the far right in France has their best chance to regain power. But Marine Le Pen’s quest for the presidency might be undone by her party’s refusal to abandon its anti-Semitism.

How did France get to this state? When terrorists slaughtered Charlie Hebdo staff in 2015 and then went on a rampage in Bataclan on November 13, 2015, killing 130 people, it triggered a voter panic that benefitted the right-wing National Front.

“France’s far-right party topped the country’s regional election vote … in a breakthrough that shakes up the country’s political landscape,” reported Peter Allen and Lydia Willgress in the Daily Mailat the time. “The anti-immigration party received at least 29.4 per cent of the votes as the country continues its state of emergency following the Paris terror attacks. It won six out of 13 regions in the election’s first round.”

Ironically, the National Front likes to portray those they attack as being Nazis. According to Allen and Willgress, Le Pen compared Muslim street prayers to Nazi occupation. Yet it is the National Front has a long history of anti-Semitism. Its founder, Jean-Marie Le Pen, made xenophobia and attacks on Jews a central message of the party he built. But even though Marine Le Pen deftly tried to put her hard core father out to pasture back in 2011 and claims she’s cleansed the party of such hatred, those anti-Jewish attack ads have shifted from overt calls delivered by a bullhorn to subtle slogans that are considered “dog whistle” attacks. These are silent enough so the mainstream media and some French voters might miss them, but deafening to those sympathetic to populist rhetoric seeking to blame others for problems, or to those who recognize such code words for what they are really about.

For example, Jean-Marie Le Pen would call out Jews by name. But his daughter chooses to rail against “financial globalization.” That way, her supporters can read “Jewish bankers” into such statements, but she can cleverly deny that she mimics her father’s overt anti-Semitism.

But did Le Pen’s classic dog-whistle maneuvers help the National Front in the first round of French presidential elections? Or did that combination of clarion calls from the right-wing party’s sympathizers and code words from the party itself actually generate a backlash?

On first glance, it may appear that targeting Jews paid off. After all, Le Pen’s party finished in the top two of the April 2017 election and advanced to the May 7 runoff, the first time since 2002 that this happened for the National Front when Jean-Marie Le Pen was the candidate. Marine Le Pen even surpassed her father’s vote tally.

But a closer analysis shows that the Le Pen campaign failed to capitalize on her 2015 success. In fact, the National Front fell in the polls during the campaign against a political neophyte and was almost eliminated by a scandal-tarred conservative, despite the presence of another terror attack.

As the campaign began, the National Front led by several percentage points against Emmanuel Macron, a 39-year-old centrist who had never held elective office before.

As the campaign wore on, Le Pen’s fortunes slipped, despite railing against “financial and Islamic globalization.” Even when a terror attack killed a policeman at the last moment, and pundits predicted a win for the more experienced Le Pen, she fell further still behind her inexperienced opponent, finishing with 21.4 percent of the vote, well below her 2015 tally (Macron received 24 percent). The question is why.

An Ifop-Fiducial poll from April 3-6 had Le Pen with a one point lead, a poll position she maintained in an OpinionWay/OPRI/Radio Classique/Les Echos polls from April 8-10.

But Le Pen’s outrageous claim that the French didn’t collaborate with Nazis to purge Parisian Jews exposed her true feelings about World War II. That much criticized April 10 statement arguably turned out to be the turning point of the first round presidential election.

Polls taken after that denial of French collaboration in the Holocaust tragedy show Macron moving into the lead, from the Harris/France Televisions/L’emission Politique, showing Macron up by two points from April 11-13, to the Elabe/BFMTV/L’Express polls of April 16-17, giving Macron the 1 point advantage. It’s a similar story for the Odoxa/Dentsu Consulting survey of April 12-13, giving Macron a two point lead. All aforementioned polls listed above show the change in election fortunes after Marine Le Pen’s controversial Holocaust comments.

As of now, the polls show Macron with a commanding lead in the second round, as other French parties have swung behind the centrist. But it’s not over yet. Revulsion with traditional parties might enable Le Pen to recapture her outsider status as they line up behind Macron. And more terror attacks could propel jittery voters to the National Front, something Islamist terrorists undoubtedly understand.

But clearly, anti-Semitism isn’t working as a dog whistle, and the National Front may know it. A few days ago, the National Front dismissed a party leader for defending a Holocaust denier and disagreeing with evidence that the Nazis gassed Jews. Such a move, unthinkable in the days of Jean-Marie Le Pen, or tolerable under Marine Le Pen at the start of the election, shows that the French may be finally rejecting their Vichy past.

John A. Tures is a professor of political science at LaGrange College in LaGrange, Ga. He can be reached at [email protected] His Twitter account is @JohnTures2.