Trump’s Meeting With Abbas: Should We Laugh Or Cry? 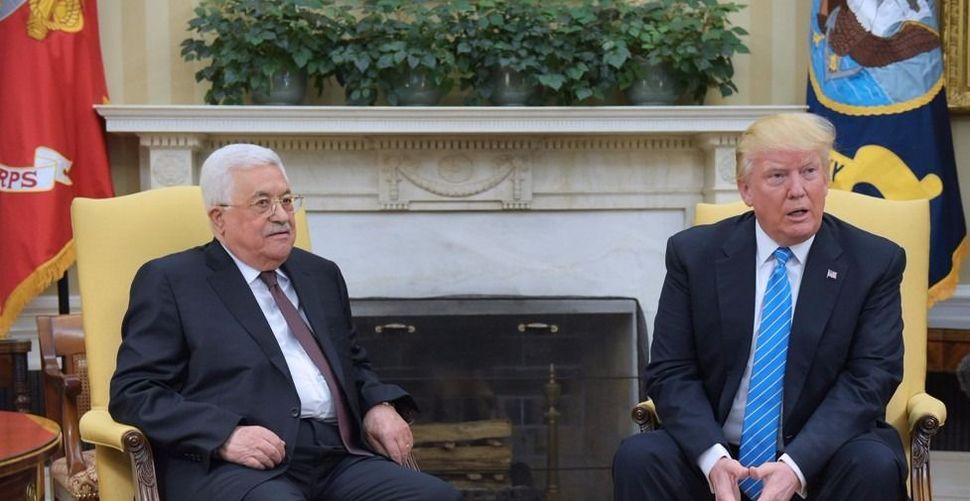 “Mr. President, with you, we have hope.” So said Palestinian Authority President Mahmoud Abbas during his joint press conference at the White House on Wednesday. As with so much in the Donald Trump era, it’s hard to know whether to laugh or cry.

Hope? Trump’s Ambassador to Israel, David Friedman, believes West Bank Palestinians — who live under Israeli control without citizenship, free movement, due process or the right to vote for the government that controls their lives — already enjoy all the freedoms they deserve. In a West Bank settlement, a building built illegally on privately owned Palestinian land bears his name.

Trump’s other key Israel advisers — Jason Greenblatt and Jared Kushner — have deep experience in the most hawkish corner of the American Jewish community but no experience whatsoever with Palestinians.

Since January, the Israeli government has authorized roughly 6,000 new homes in West Bank settlements — further eroding the prospects for a Palestinian state — yet the Trump administration has uttered barely a word of protest. When Israeli Prime Minister Benjamin Netanyahu visited Washington in February, Trump said he didn’t much care whether the Palestinians got their own state or not. And on Wednesday, moments before Abbas announced that he now has “hope,” Trump declined to publicly support a Palestinian state yet again.

We’re past tragedy. This is farce.

Since he began running for president, Trump has never, in a single public statement, acknowledged that millions of Palestinians in the West Bank live without basic rights and that millions more in the Gaza Strip suffer under a toxic combination of Hamas tyranny and Israeli blockade.

With Abbas standing nearby, he said on Wednesday that a peace agreement must bring “safety, stability, prosperity to both peoples” and allow “both peoples to live, worship, thrive and prosper in peace.” Notice the missing word? It’s freedom. Until Palestinians enjoy freedom — until they live as citizens, not colonial subjects — they will never enjoy “safety” and “prosperity,” they will never “thrive,” and they will do their best to ensure that Israelis don’t either.

But by dispensing with the language of freedom, Trump plays into Netanyahu’s hands. He perpetuates the hope, which Netanyahu has nurtured for roughly three decades, that Israel can bludgeon the Palestinians into accepting something less than a state of their own.

Netanyahu, perhaps aided by Friedman and other administration officials, is exploiting Trump’s ignorance and vanity. The only thing that Trump really knows about the Israeli-Palestinian conflict is that solving it would be “the all-time negotiation” and “the ultimate deal.” It would bolster his claim to being the greatest president, perhaps the greatest human, of all time.

If all you care about is getting a deal — if you don’t care whether it’s moral or even sustainable over the long-term — the easiest thing to do is to muscle the weaker party. Pressuring Israel to accept a Palestinian state near the 1967 lines with a capital in Jerusalem would be brutally difficult. Netanyahu and almost everyone in his government vehemently opposes the idea. And given Netanyahu’s tremendous influence in Washington, especially in Trump’s own party, he can push back. Netanyahu has, after all, been successfully stiffing American administrations since the days of George H.W. Bush.

Abbas, by contrast, comes to Trump’s negotiating table holding a pair of threes. The Palestinian Authority isn’t a government. It’s a government’s subcontractor. It picks up the garbage and catches car thieves in an archipelago of Palestinian villages and towns, surrounded by Israeli settlers and soldiers, in the West Bank. Abbas can’t even host foreign officials in his office in Ramallah without Israeli permission. Abbas doesn’t control the Gaza Strip. He lacks legitimacy among his own people because the occupation has entrenched itself on his watch. And he has barely any allies in Washington.

Abbas’ only real power is the power to stop playing ball: the power to stop policing the West Bank on Israel’s behalf and the power to begin suing Israel in international courts. But Netanyahu and Trump would likely retaliate harshly. Abbas would lose the privileges and perks upon which he and his network of family and associates rely. And many on the Israeli and American right wouldn’t even mind seeing him go.

So Abbas is willing to come to the White House and tell Trump that he’s the Palestinians’ great hope. And he’s willing to start a fictitious “peace process” with an Israeli prime minister determined to control the West Bank and an American president who doesn’t even understand why that can’t constitute the foundation for a deal. Maybe Abbas is hoping for a miracle. Maybe he’s grateful just that Trump is talking to him at all.

At the end of the day, it’s all a masquerade. Ultimately, Abbas can’t sign a deal that leaves the Palestinians with far less than a state. Even if he did, his people wouldn’t accept it. And since it’s highly unlikely that Trump will pick a real fight with Netanyahu, Trump’s advisers will eventually realize that this is one real estate deal they can’t close. But by then, Trump’s ego will have likely moved onto other things.

The most enduring result of all this will be the public abandonment, by an American president, of the two-state model. Chalk up another win for the Israeli government and the American Jewish establishment, and a profound, perhaps existential, loss, for the dream of a democratic Jewish state.

Peter Beinart is a Forward senior columnist and contributing editor. Listen to “Fault Lines,” his podcast with Daniel Gordis, here or on iTunes.

Trump’s Meeting With Abbas: Should We Laugh Or Cry?