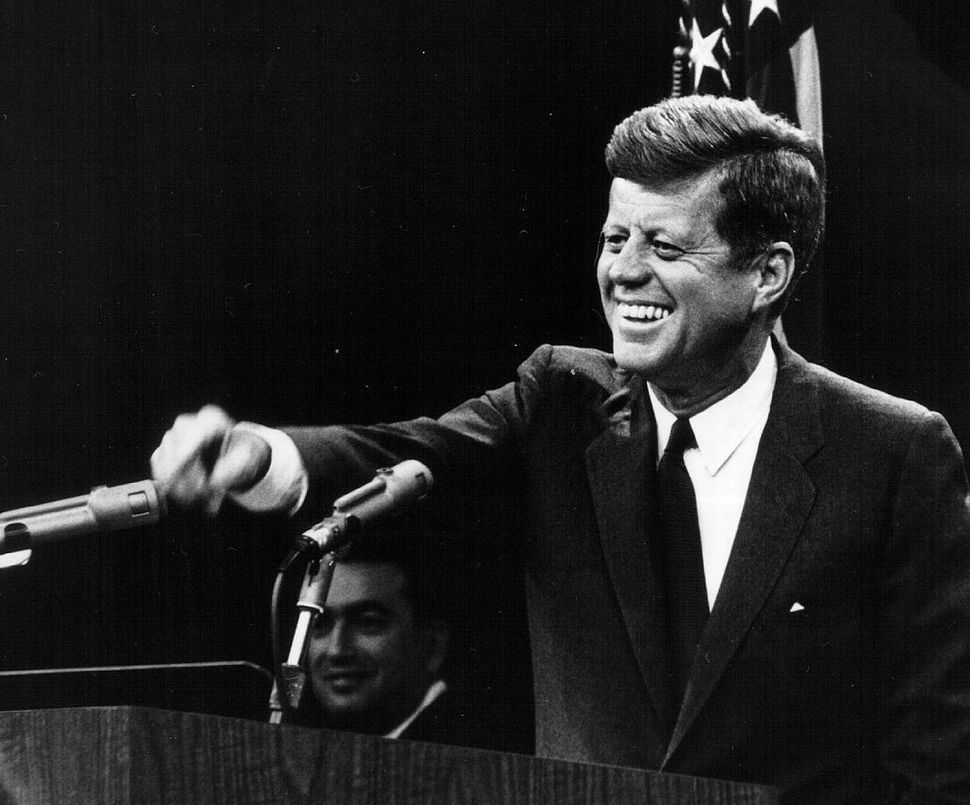 In the November 28, 1963 issue of the Forverts — only six days after Kennedy’s assassination — editor-in-chief Simon Weber wrote about President John F. Kennedy’s favorite biblical passages. President Kennedy would have been 100 years old on May 29, 2017.

that what he gave us most was pride.

It felt good to have a President like that:

So begins the poem written by Molly Kazan after the shot that extinguished the young life of our president and that pierced the hearts of hundreds of millions of people. Molly Kazan, a well-known playwright, expressed all of our feelings with these simple words: It felt good to have a President like that. Maybe we weren’t always conscious of it, but seeing him on a podium — be it at his swearing in ceremony, at the United Nations Assembly or at a press conference — we felt proud. It was heartwarming to know he was our elected leader. When a smile beamed out across his noble face at the laughter of several hundred correspondents responding to one of his notable jokes or witticisms, we all smiled with him.

Yes, it felt good to have such a President who liked the Bible and Shakespeare, who read books, newspapers and journals, who liked theater, gold and swimming, who was knowledgeable of everything — from farm problems to the lunar project. And who felt comfortable at conferences with other world leaders as he was with his own children on his lap. Who expressed no less concern for the hungry children of the unemployed coal-miners in West Virginia than for the country’s security against foreign weaponry.

By honoring poets, musicians and other artists, Kennedy wiped out contempt for culture that several of his predecessors helped instill.

It was good to have a president who not only strengthened our country militarily but also intellectually. Before entering the White House it was fashionable in this country to poke fun of ‘eggheads’ – the educated, the intellectuals. Today, there’s a more respectful approach to the professor, the writer, the cultural creator.

John Fitzgerald Kennedy, himself an intellectual, naturally awakened interest in culture and knowledge. Through his own personality and by honoring poets, musicians and other artists, he truly, overnight, wiped out contempt for culture that several of his predecessors helped instill.

Throughout her entire history, America’s had few presidents like this. Who knows when she’ll be fated to have another such president?

We all knew a lot about President Kennedy, but not everything. After his tragic death, new material was revealed about him and also about ourselves. We learned how strongly bonded we were, how deep our love of this great man was.

At the President’s funeral, Bishop Phillip M. Hannan brought out Kennedy’s favorite Old Testament passages. Only once did the Bishop reveal the source of a passage — when it was Ecclesiastes chapter three. The other passages were combined from Psalms with additional ones taken from Proverbs and Joel, Joshua and Isaiah. The cleric then ended the eulogy with an excerpt from the President’s swearing-in ceremony speech given January 20th, 1961 — a speech that will surely be venerated in America’s history.

With assistance from colleagues knowledgeable in the Old Testament, I looked up the citations and bring them here in Yehoash’s Yiddish translation.

The passages from Proverbs and Joel begin with the last words of the first verse, in the third chapter in which the prophecy of Joel is cited:

Your old men shall dream

Your young men shall see

And it ends with half of the 18th verse of the 29th chapter of Proverbs:

Without a prophetic vision a people

Bishop Hannan then cited passages from Joshua and Isaiah that John F. Kennedy recalled during the nomination process for President at the Democratic National Convention in 1960. The citation starts midway with the 9th verse of the first chapter of Joshua, who upon taking on the leadership of the people, after Moses’ death, was warned by God several times saying:

Be strong and courageous, do not

be afraid and do not

And it concludes with the 31st, and last, verse of the 40th chapter of Isaiah:

Yet they that wait upon the Lord

they shall mount up with wings as eagles;

they shall run and not be weary.

In the speech he prepared to give in Dallas before a damned murderer’s bullet forever sealed his lips, President Kennedy had prepared a fragment from Psalms, chapter 127, portions of the first verse:

Unless the Lord guard the city,

in vain is the watchman wakeful.

The President prepared these words to say in connection with his warning that we must not only be strong, we must also be just and righteous, because power alone won’t persist.

The Bishop concluded the biblical excerpts with parts of the third chapter of Ecclesiastes, that he stressed was one of the fallen President’s favorite bible passages (this information was given him by the young widow, whose poise in those frightful days became admired the world over. Esteemed writers said Jacqueline Kennedy gave America something the country never owned: Majesty.)

Here are the passages from Ecclesiastes that the President so loved:

For everything there is a season; and a

time is for every pursuit under the heavens:

A time to be born,

And a time to die;

A time to plant,

And a time to pluck up what hath been planted,

A time to kill,

And a time to heal;

A time to break down,

And a time to build up.

A time to weep,

And a time to laugh.

A time to mourn,

And a time to dance.

A time to gather up stones;

A time to embrace,

And a time to be far from embracing.

A time to seek,

And a time to let things be lost;

A time to keep,

And a time to throw away.

A time to rend,

And a time to sew;

A time to keep silence,

And a time to speak.

A time to love,

And a time to hate;

A time of war,

And a time of peace.

At the end of the eulogy, the Bishop read an excerpt of the President’s inaugural address that sounded so fresh and uplifting with its pride, confidence and faith in our own strength and in his much beloved America:

“The energy, the faith, the devotion which we bring to this endeavor will light our country and all who serve it — and the glow from that fire can truly light the world.”

So spoke President Kennedy less than three years ago when he proclaimed the “torch has been passed to a new generation of Americans.”

It’s hard, very hard to make peace with the terrifying fact that the torch is already no longer in his hands.

Simon Weber (1910-1977) served the editor-in-chief of the Forverts. Translated from Yiddish by Chana Pollack.