The Bible Is Packed With Tough Guy Jews 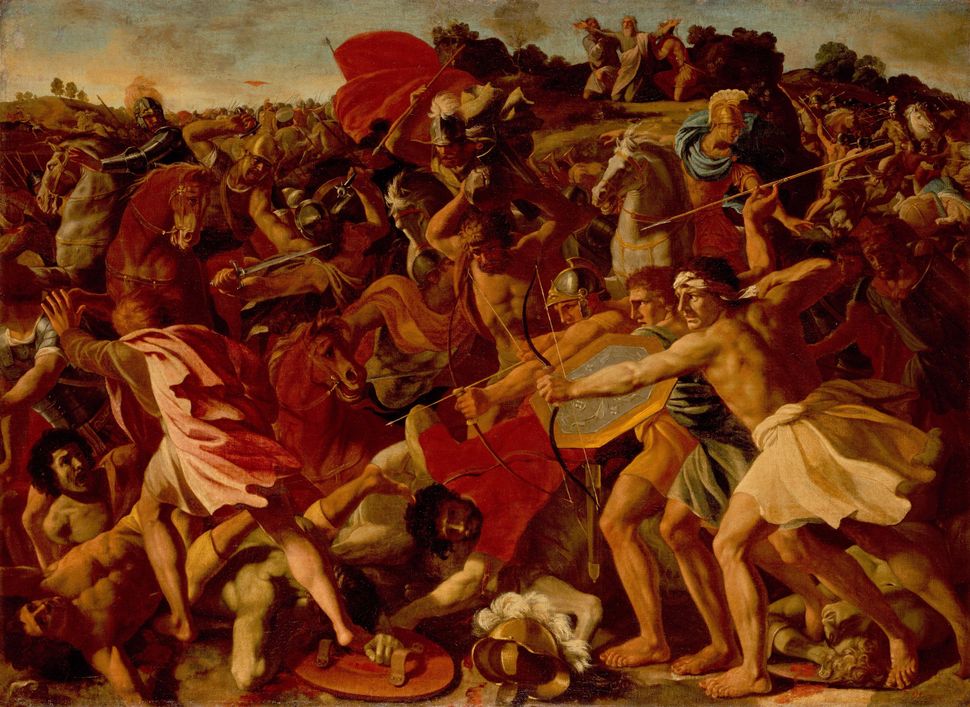 This article was originally published in the Forward on August 8, 1997.

In his eagerness to embrace what he terms Judaism’s “sissy heritage” (“Deconstructing the Jewish Man,” June 27), Daniel Boyarin seems to deliberately ignore another, equally valid side of the Jewish heritage that happens not to fit his ideology. The Zionist “tough guy” machismo Mr. Boyarin so loathes is not the invention of a homophobic Herzl and Freud, as he would have us believe, but the natural revival of ancient Jewish tradition. Do we not find right in the Bible accounts of how Abraham went to war against the Canaanite kings to save his captive nephew Lot, and how Shimon and Levi destroyed Shechem to avenge the defilement of their sister dinah? Significantly, when Jacob protests their actions, the Torah gives the unrepentant brothers the last word.

We further read how Moses slays an Egyptian beating a Jew, how Pinchas kills to defend the honor of God, how Jacob conquers Canaan, how the prophet Samuel hacks the Amalekite king Agag to pieces and how Samson, Saul and David war against the Philistines. Add to that, of course, the violent overthrow of the Syrians by the Maccabees.

There is nothing really noble about anti-heroic passivity adopted by Jews from Talmudic times onward that Mr. Boyarin celebrates; while the Talmud does advise that it is better to be persecuted than to be a persecutor, it also elsewhere states that if someone is coming to kill you, you should kill him first. Jewish pacifism came about because the Jews really had little other practical choice once they became a subjected minority. Violent resistance would have been suicidal.

The virtue of edelkeit (refinement and gentleness) is a wonderful character trait within the Jewish home, or within a community of like-minded souls. However, this noble characteristic of the Jew has utterly failed to impress or deter thuggish anti-Semites down through centuries of oppression. While the Holocaust, for instance, produced countless stories of individual kiddush Hashem (dying to sanctify God’s name), taken collectively it is one giant chillul Hashem (desecration of God’s name), as the arrogant Germans, yimach shmom, mocked the weak and passive Jews with taunts of “Where is your God now, Jew?”

In the post-Holocaust era, God has seen fit to use the swaggering, tough-guy Zionists Mr. Boyarin so despises to give the Jewish people their own state. To borrow a concept from the late Rabbi Meir Kahane, zt”l, these are not some “new” kind of Jew but rather a throwback to the heroic “old” Jew of biblical days.

Whether Mr. Boyarin and others who gun to embrace the “sissy heritage” like it or not, the “old” Jew is here to stay.

The Bible Is Packed With Tough Guy Jews