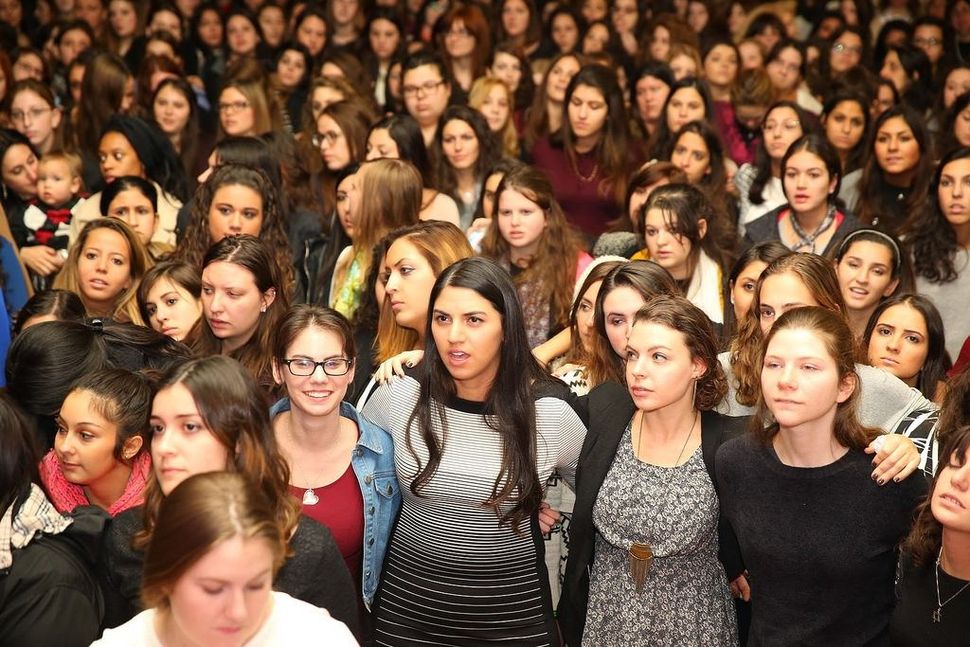 In a recent analysis of U.S. religious groups, the Pew Research Center reported that the most educated American Jews are also the least religious.

In considering these findings, it’s tempting to think that secular education leads to assimilation among American Jews (I want to be clear that Pew, a leading source of data on contemporary Jews in the U.S., Israel and globally and a non-advocacy fact tank, did not put forth this reading of the data). The reason this might make sense: In a diverse, open society, education can draw people away from their particular group and its ways of life. Highly educated Jews, it seems, may be more likely to distance themselves from some traditional Jewish practices.

But that interpretation would be narrow and incomplete. It turns out that sometimes secular education is linked to assimilation, sometimes to connectivity and sometimes to neither.

Using data from its landmark 2013 survey of U.S. Jews, Pew showed that college-educated Jews are less likely than Jews without a college degree to believe in God with absolute certainty and less likely to affirm that religion is very important to them. Partly accounting for these differences, Pew noted, are Orthodox Jews, who are more religious and tend to have lower levels of secular schooling than non-Orthodox Jews. But even when non-Orthodox Jews only are examined, the more educated are less religious.

My own analysis of the same survey data confirmed Pew’s findings and more. Jews with a college degree are also less likely to keep kosher at home, to refrain from handling money on Shabbat, to report that all or most of their close friends are Jewish, and to say that being Jewish is very important to them. (Note: I analyzed Jews 30 and older because by that age, most people have either gone to college or decided not to).

These data points may be particularly troubling because secular education has been one of the prime engines of Jewish social, political and economic success in America. Could it be that higher education, that storied upside of American Jewish life, has a serious downside, too?

Fortunately, the answer is no.

Jewish life is multifaceted. It encompasses religion, ethnicity and culture. It spans family, local community and global peoplehood. It has attitudinal and behavioral aspects. By looking further at the Pew survey data, we can see that in many cases, college education has no association with assimilation. In other cases, higher education encourages Jewish connectivity, the very opposite of assimilation.

The data reveal that Jews with and without college degrees display many similar attitudes and behaviors. The two groups are just as likely to express pride in being Jewish, to have a strong sense of belonging to the Jewish people, to feel a special responsibility to Jews in need, to say it’s essential to them to be part of a Jewish community and to be emotionally attached to Israel. In addition, they are just as likely to attend Jewish religious services monthly or more, to be able to converse in Hebrew, and, among those who are married, to have a Jewish spouse. On these measures, college education and assimilation do not go hand in hand.

The data also show that in some circumstances, higher education is associated with connections to other Jews and especially to Jewish organizations. College-educated Jews are more likely than their non-college educated counterparts to belong to synagogues and other types of Jewish organizations, to make donations to Jewish causes, to travel to Israel, to hold or attend Passover seders, and to fast on Yom Kippur. Here, higher education may promote increased Jewish connectivity (which elsewhere I have called cohesion), not assimilation.

These patterns intensify when non-Orthodox Jews are analyzed separately, as I (like Pew) did. Among the non-Orthodox, college education promotes connectivity on even more measures and assimilation on fewer.

So yes, higher education appears to make Jews less certain about the existence of God, less observant of some rituals, and less inclined to say religion and being Jewish are very important to them. It also appears to weaken Jewish friendship networks modestly. In these ways, then, education may contribute to assimilation.

But taking a broader view of the multiple connections Jews have to each other and Jewish life allows us to see a fuller picture. Secular education often has no relationship to assimilation; Jews with and without college degrees are remarkably similar to each other on numerous Jewish behaviors and attitudes. Meanwhile, those with college education are sometimes more connected to other Jews, Jewish organizations and Jewish life — that is, less assimilated — than those with less secular schooling.

Higher education, responsible for so much American Jewish achievement and vitality, has no consistent, straight-line relationship with assimilation. Instead, its association with assimilation and connectivity varies quite a bit.

Jews have a quip that conveys the complexity of Jewish life: “Jews are just like everyone else, only more so.” As this example shows, Jews with a college education are no exception. The complexity of their lives demands close examination. It deserves a rich and nuanced understanding. And it defies easy interpretation.

Laurence Kotler-Berkowitz, Ph.D., is senior director of research and analysis and director of the Berman Jewish DataBank, both at The Jewish Federations of North America. He served as an adviser to the Pew Research Center on its 2013 survey of U.S. Jews. This article first appeared on JTA.