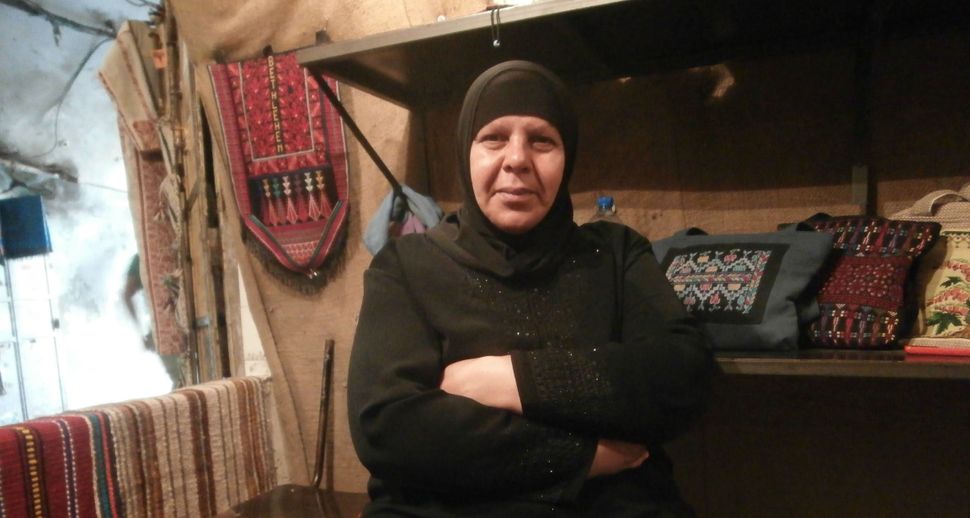 Leila Awawdeh felt like a mother to me. Yes, she is Palestinian, a devout Muslim woman in her late 50s. And when I met her, I was a 22-year-old Jewish New Yorker, traveling around the region to interview locals for a book project.

But on the streets of Hebron’s Old City, her calm, quiet voice often drew me into her shop. “Are you okay? Did the settlers treat you badly?” she’d ask, concerned.

I’d sit in Leila’s cramped shop while we kibitzed, drank tea and discussed the news. She never hounded passersby like other shopkeepers; Leila stuck out by sitting still.

Leila runs an all-female cooperative, Women In Hebron, founded in 2005 to break a stranglehold on Old City commerce by the local old boys club.

She recalled selling popular trinkets that read “Women Can Do Anything” knocked off by competing merchants. “So we [made] another [trinket] that said ‘Men Can Do Something!’” Leila said, chuckling.

Though her voice was soft, her words were bold. “I don’t like to fight. The way I resist is to talk,” she said.

And so, Leila sat with me and shared all she could.

Leila grew up near the village of Al-Dawayima, west of Hebron, where in 1948, as prominent Israeli historian Benny Morris later verified, Israeli soldiers massacred civilians, including women, children and the elderly. Official numbers vary. Many survivors fled to Leila’s village, where as a child she heard harrowing accounts of the brutality.

After the Six Day War, Leila had her own difficult stories to tell. She was only a little girl when Israel routed the Arab armies. “I still remember my mother carried my little brother on her back and we left [our village] because of the war,” she recalled. “We had nowhere to hide, so we had to walk to a village nearby.” Leila noted that a woman she stayed with, remembering the 1948 massacre, sewed the bottom of her dress and painted her face black, fearing that soldiers would rape her.

When Leila saw soldiers from the Israeli Defense Forces for the first time in 1967, “I told my mom, ‘They have hands, they have faces. They are like us. Why are we scared?’” she recalled. “But [Mom] said that they were killing the people, they have all the weapons.”

In the following days, as the Israeli army instilled order on the streets of Leila’s village, “the soldiers tried giving us sweets,” she remembered. “Even though we were poor, we didn’t take anything from them. After what they did, we could never accept sweets.”

In the immediate aftermath of the war, Leila’s family struggled to find food, and her father would forage in demolished homes. By Israeli military law, this was illegal, and her father was imprisoned many times.

“Even when I was young, I knew where my father hid the goods,” Leila said. “I entered the homes to take them, and I hid them under my dress. My father didn’t tell me to do it, but I wanted to help… so he wouldn’t be arrested again. By then, I was not scared.”

As Leila often told me, soldiers “may have weapons, but we have hearts and minds.”