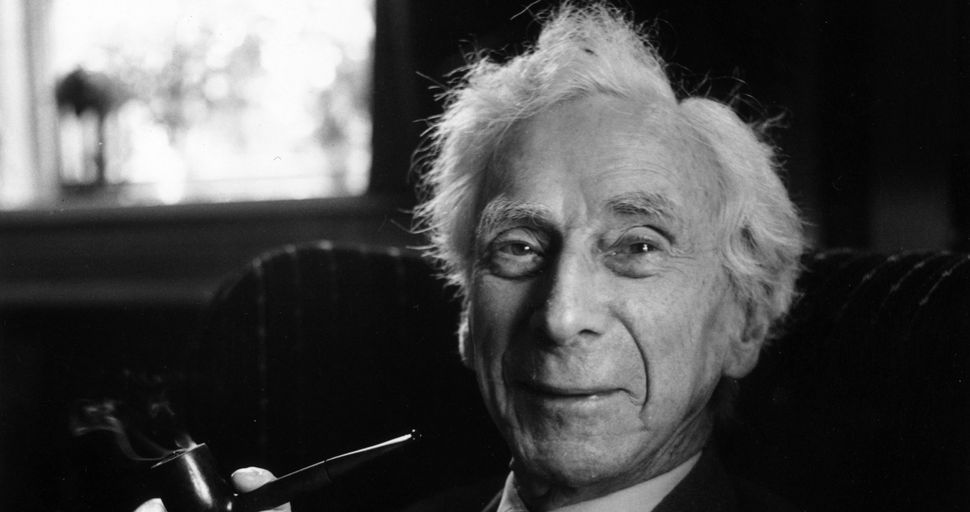 Bertrand Russell wrote 51 articles for the English-language supplement of the Jewish Daily Forward—a significant output, even for a writer so prolific. The association was productive but short lived, spanning just four-and-a-half unsettled years of inter-war history. His first submission, in May 1926 attacked the British Government’s handling of a bitter labour dispute that culminated in a national strike. Russell’s last piece, a review of British astronomer Sir James Jeans’ book “The Mysterious Universe,” appeared in December 1930.

These contrasting “bookends” capture the variety of Russell’s writing for the Forverts, which reflected the vast breadth of his own interests and experiences, as well as some general preoccupations of the age: one of dramatic scientific progress pregnant with sinister as well as beneficent potential, of shifting moral sensibilities, and of new hopes and old fears for the social and international orders.

The editor of the paper’s English supplement, Nathaniel Zalowitz, gave Russell license to discuss anything he wanted. But in a letter dated May 21, 1928 Russell later admitted to his editor that he was “always glad” to have topics suggested to him. Whether under such editorial direction or on his own initiative, Russell moved seamlessly from comparing the situation of American and British Jews (June 1926), for example, to expounding upon China and the West (Feb. 1927), eugenics (Nov. 1927), the road to peace (Feb. 1928), cinema and morality (March 1929), the Lateran Treaties (between Mussolini and the Vatican, June 1929), modern marriage (Jan. 1930), or the objectives of education (Aug. 1930) — and much else.

Russell had enjoyed a healthy American readership since before the First World War and was a regular traveller to the United States from his earliest visit in 1896 until his last in 1951. He knew and understood the country well. His American profile was further raised in the 1920s by a succession of lucrative if gruelling lectures tours, which helped offset the serious financial drain of the experimental school he had established with his second wife, Dora. He became an especially familiar presence on the progressive political and intellectual scene of New York, delivering many public speeches—sometimes voicing his misgivings (as he would for the Forward) about the inequities in American society, the hypocrisy and materialism of its mores, or the pressures for conformity in its political and educational life.

During the Cold War era, Russell faced censure for his alleged anti-Americanism. But his criticisms of the United States were usually intended fraternally—at least until the 1960s. Four decades previously he definitely entertained a cautious hope that burgeoning American power might be exercised benevolently on the global stage.

Although it could be seen as a major coup for the Forward to have obtained the services of such a celebrated author, the paper’s initial commitment to Russell did not extend beyond three or four articles of 1,000-1,500 words for payment (at their author’s suggestion) of four cents per word. Its editor need not have worried about Russell’s approach being too technical. He was a master of political and philosophical distillation and in such works as “The ABC of Atoms” (1923) had proven equally adept at popularizing complex scientific ideas. The relationship became highly satisfactory to both parties, with Russell invariably receiving front-page coverage.

At one point, Russell gingerly asked Zalowitz for a higher rate of pay but declined to press the point out of respect for “the work you are doing and all that you represent in America” (21 May 1928). It is rather curious, then, that his publishing arrangement with the Forward should have ended so abruptly.

From July 1931, a 700-word column by Russell started appearing in the rather different forum offered by the conservative Hearst press. Russell’s succinct Hearst articles also showcased his literary gifts and are not nearly so throwaway as might be supposed.

But taken as a whole they are slighter than his writings for the Forward, which probed more deeply current politics, political ideology, public morality, or philosophical inquiry His essay on the foibles of gerontocracy then, with irony and mordant humour to the fore, is by no means typical of his work for the newspaper as a whole. The target of his ire was not a superannuated political class but the petty cruelties and prejudices of the local worthies who often sat on the benches of Britain’s lower courts. Could it be inferred from Russell’s critique, however, that a certain American president is simply unhappy, and dangerously so?