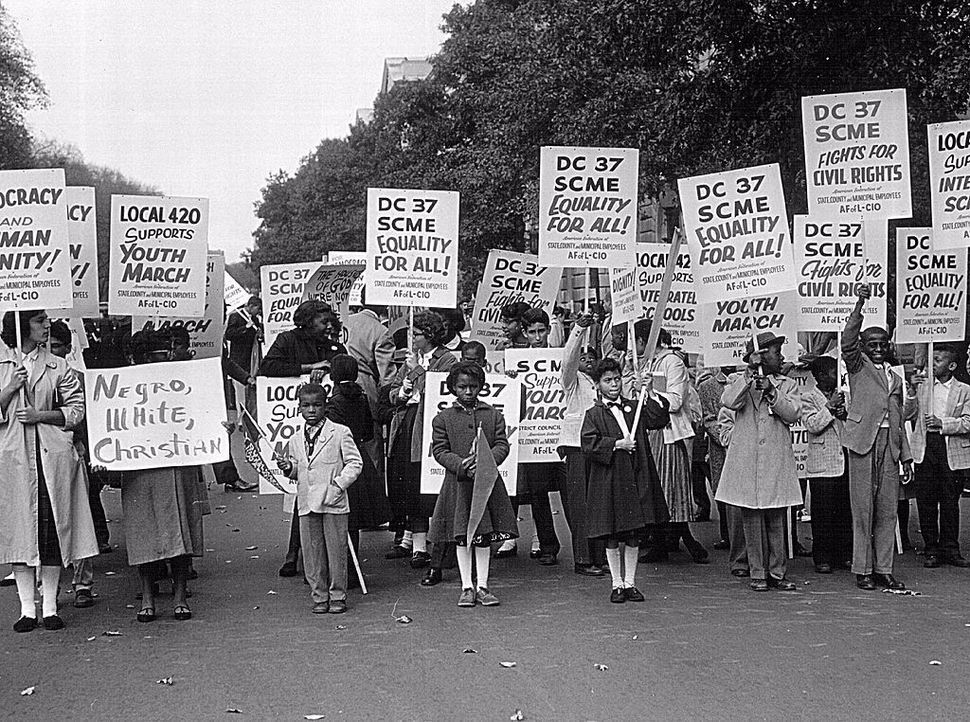 This week marks the 63rd anniversary of Brown v. Board of Education, the landmark Supreme Court case that declared segregated schools, even if they had similar resources, were “inherently” unequal because separating children by race caused serious adverse effects. Shockingly, more than six decades later, New York City has the most racially divided schools in the country. My white Jewish children attend one of them.

When it came time to send my oldest son to kindergarten, I noticed that most of our neighbors didn’t send their kids to our zoned public school, PS 282, in my Park Slope, Brooklyn community, a school that is majority black and Hispanic with a high proportion of low income families attending. The school a few blocks down is the coveted PS 321, a predominantly white well-resourced school, which performs very well in in state tests. Only 15% of New York City’s public school students are white, but you’d never know it walking through PS 321; the school’s racial makeup is the exact opposite. Though PS 282 is full of caring educators, the school, like many minority schools in the city and throughout the country, is short on resources and while our test scores continue to improve, they are not as strong as 321. In 2015, fewer than a third of students passed state exams. Despite the scores, we chose the latter.

I understand the parental instinct to want our children to attend a “good school,” a term usually synonymous with white, and upper-middle class student bodies. When racial tensions exploded in our hometown of Detroit, Michigan, the majority of families like mine moved to the suburbs, but the white flight institutionalized and hardened existing racial and economic divisions and the city’s schools suffered as a result.

Having lived in two of the most segregated cities in the country, I understand that much of our lack of integration is due to structural racism and decades of housing discrimination. However, I also recognize that individual parents, especially white and middle-class families, have the power to disrupt this cycle. As the Executive Director of Avodah, a Jewish nonprofit that works to eradicate poverty across the U.S., I’ve seen first hand that school integration can play an important role in ending the cycle of poverty for many of our youngest citizens of our country.

Studies show that black adults who attended integrated schools are less likely to be poor, suffer health problems, are more likely to go to college, live in integrated neighborhoods, enjoy longer lives – and those benefits are passed down to their children. However, integration benefits white and middle-class students too; as black student test scores rise, so do white ones. If we want to strengthen our educational system as a whole, those of us who come from privilege need to be serious about making integration a priority in our schools. It’s not always a comfortable thing to be the only white parents in a classroom – but knowing that in 2017, one’s skin color, zip code, or income, can determine a child’s future isn’t comfortable either.

Our city is the most diverse in the world, yet it is the norm for our children to be in a school where nearly everyone looks, speaks and lives as they do. There is a real loss in homogeneous classes. Studies show that as early age five, children internalize racist perceptions, and recognize differential treatment of different racial groups. However, children who attend diverse schools are less likely to be prejudiced. Both of my sons are one of only a handful of white children in their classes. I don’t know if this is something they recognize, but I know they love their school, their friends, their teachers, and that they are succeeding.

As a religious minority, we must think about how integration helped us as Jews. Fifty years ago, it was unheard of to have days off for Rosh Hashana or Yom Kippur, but today our children have the opportunity to celebrate and learn about Jewish, Christian, and Muslim holidays, and it has only enriched my children’s experiences to learn about and appreciate other cultures.

In today’s political climate, it feels more crucial than ever for our children to know, learn from and listen to peers of different backgrounds. Jewish cemeteries and mosques are being vandalized. Black and Latino children are being shot by police and more and more rights are being denied to LGBTQ folk. Just days ago, torch-wielding white supremacists marched in Charlottesville, Va., a scene that harkened back to the days of lynchings. Americans need to get to know each other, build relationships and speak up for one another. Social justice activist and lawyer Bryan Stevenson advocates for the power of proximity. “You can’t understand most of the important things from a distance. You have to get close,” he says. Whether that proximity is made on the playground, during PTA fundraisers or in class, integration gives us the power to combat bigotry.

Listening to Our Neighbors

When I put my kids to bed, it’s my family’s nightly ritual to say the Shma prayer together. Shma means listen – and listening feels so timely today. When I envision America’s future and the values we’re trying to create, I want our children to listen to one another and have a better sense of people’s lives so that they can break out of this polarization and create a stronger, more united nation. By the time my elementary school-aged children are adults, the U.S. will be majority people of color; learning to engage with those who are different than ourselves is an essential life skill.

I am under no illusion that school integration is easy or straightforward. But in order to create the kind of society and world that we wish to live in, we have an obligation to lean into our values. It will take work and partnership to transform a segregated and vastly unequal school system. But I believe deeply in working toward this vision; in my case that means a Brooklyn school that looks like Brooklyn. We have a choice to accept segregation or to put our children in schools whose student bodies are reflective of the city we live in. In doing so, it is my hope that my children will be more resilient, more motivated to pursue justice and better equipped to create the kind of world in which we wish to live.

Cheryl Cook is the Executive Director of Avodah.