Israel Trip Gives Trump A Boost With His Jewish Supporters 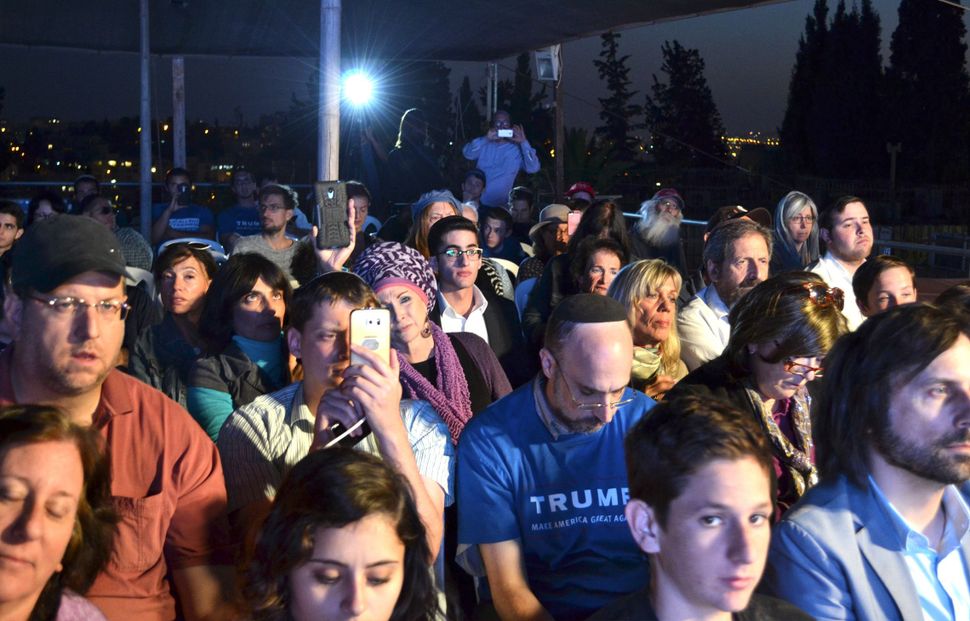 Trump supporters at the Jerusalem rally. Image by Naomi Zeveloff

The Forward’s editor-in-chief Jane Eisner recently posed a simple question for Jewish supporters of President Donald Trump: Had enough yet?

It should be obvious by now that this is a president who cannot and will not keep his word. Perhaps you, his supporters, still will give him a pass. He’s surely not the first president to break a promise or two. But his disclosure of highly classified information to senior Russian officials is of a more dangerous and more consequential magnitude.

I spoke with one of these Jewish Trump supporters, Yigal Marcus of Teaneck New Jersey, and his answer could be summed up as: Not just yet!

The vast majority of Jewish supporters of Donald Trump, 24% of Jewish American voters, are Orthodox. When asked, many cited national security and Israel as the basis of their support for the Republican.

Marcus was lukewarm on Trump to begin with, but liked the prospect of a non-politician in the White House — one who didn’t care about what a biased media thought of him. He was optimistic there would be real change for the first time, and that Israel would bear the fruits of this shift. Before Trump began his overseas trip, Marcus admitted that his optimism ended with the reported leaks by Trump of Israeli intelligence to Russian officials, who have ties to the Syrian and Iranian regimes.

With scandals relating to the firing of FBI Director James Comey and the ongoing investigation into the Trump campaign’s ties to the Russian government, many in the media wonder why — despite their vociferous reporting on the ills befalling the Trump administration — so many of his supporters remain loyal. Before the Comey controversy became big news, a national poll found that just 2% of Trump voters suffered from buyer’s remorse.

The Associated Press recently interviewed a number of these supporters, who told reporters “I tuned it out” and “You just gotta stick by him and hopefully he does things that benefit everyone.”

It turns out Trump supporters are sticking by their guy not despite the media’s laser focus on the administration’s scandals, but perhaps because of them.

In my conversation with Marcus, an Orthodox Jew different in almost every way from the Trump supporters the AP talked to in Staten Island, Iowa and Georgia, the same explanation arose. “The media is so anti-Trump,” Marcus told me, “that they’ll blow up every story. I’ve tuned them out. From my perspective you have to give someone time. Even if I don’t like where he’s going, he’s a very smart negotiator. You have to give someone a year at least in a job; that’s when the public starts preparing for next election. He has to right the ship before the next election. It’s not smart to turn your back this early or he’ll disregard any influence you may have had. It behooves all of us [as Republicans and conservatives] to learn the job and tries to chip away at him. He’s not going to change the world or learn … the job overnight.”

Marcus is one of several Trump supporters who remarked positively on a column from Caroline Glick in the Jerusalem Post this week that reminded readers, “Throughout the Obama administration, US officials illegally leaked top secret information about Israeli operations to the media.” Glick contends the leakers in the U.S. intelligence community that targeted Israel under the Obama administration have now set their aim on President Trump. Many on the right, even those who were never supporters of the President, judge the leaks as part of an anti-Trump feeding frenzy — an attempted coup on the part of a biased media and their sources in the intelligence community and federal bureaucracy.

After Trump’s speech on radical Islam and terrorism in Saudi Arabia over the weekend, Marcus is among many Republicans and conservatives again feeling cautiously optimistic about the Trump administration. He deemed the speech “outstanding” and the “second best speech of his presidency.” In the New York Post (disclosure: my husband is the op-ed editor there) John Bolton declared the speech “a good start” but cautioned “action must follow” Trump’s rhetoric.

As many supporters of politicians have experienced over the years, Trump’s loyalists are facing the fact that the campaign promises they counted on may not be easily fulfilled when their candidate is faced with reality. While it was easy and politically expedient for candidate Trump to take a principled stand on the location of the U.S. embassy in Israel, the logistical and geopolitical realities of that move from Tel Aviv to Jerusalem has now made President Trump far more reticent.

Unlike his predecessor, however, Trump’s supporters still believe his heart is in the right place when it comes to the issues they care about — Israel included.

Bethany Mandel is a writer for the Forward.

Israel Trip Gives Trump A Boost With His Jewish Supporters