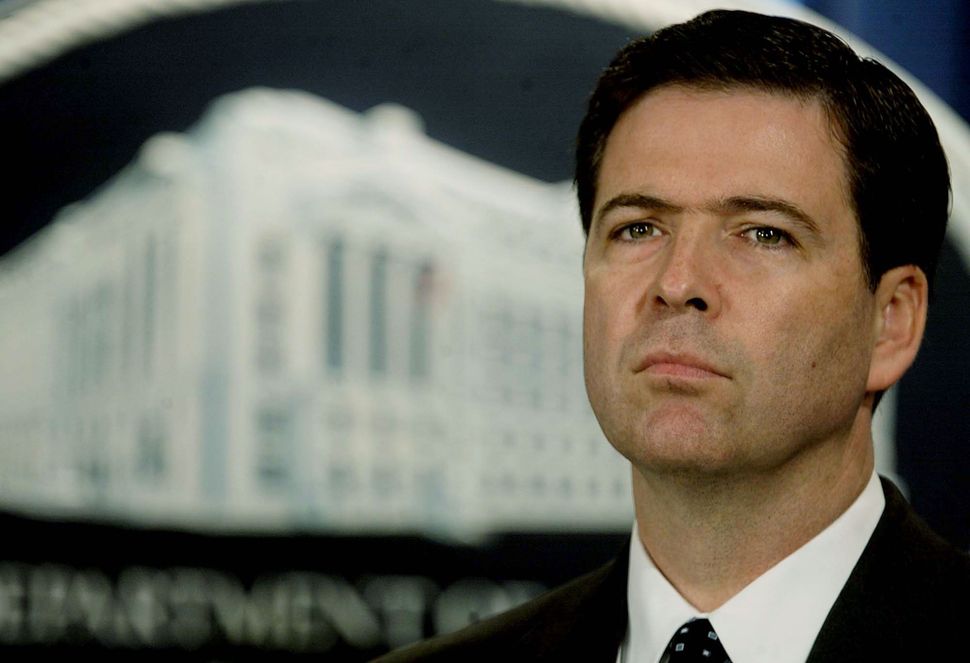 It’s clear what Donald Trump got rid of in his “midnight massacre” firing of FBI Director James Comey: an investigation into his ties to Russia that is somewhere between pesky and a prelude to impeachment.

Less well observed is what he gained: the weaponization of the FBI, soon to be headed by a Trump loyalist, which will further cement the power of the president to investigate enemies, settle scores, and replace the truth with alternative facts.

At what point, one wonders, will some Trump supporters jump ship? We should force them to say so now, before we normalize, bit by bit, the erosion of our democracy and societal norms. We’re already inured to a chief executive baldly lying, throwing late-night fits on Twitter, yelling like a child at foreign leaders, vacationing more than any president since Dwight Eisenhower (and at taxpayer expense, pouring money into his family’s coffers), delegitimizing federal judges, glibly overturning decades of settled U.S. foreign policy, attacking bastions of democracy like the free press, and speaking in gibberish that makes George W. Bush seem like Barack Obama.

What will it take? An actual nuclear exchange? Proof positive that Russia was behind the email hacks that wounded Hillary Clinton’s campaign, the leaks, Paul Manafort, and Michael Flynn? Maybe the release of that water-sports kompromat that the Russians allegedly possess on Trump? How about a nationwide state of emergency, suspending the Constitution because of a terrorist attack? All of these are now shockingly imaginable. Tell me your red lines, Trump supporters, and I’ll bet you the president will cross them.

The Jewish tradition is quite familiar with tyrants, and quite suspicious of them. From Pharoah to Ahasuerus to Nero to Hitler and Stalin, we have suffered under the yoke of authoritarians unrestrained by law.

Moreover, the notion that no one is above the law is perhaps the single greatest contribution of the Jewish civilization to the human race. No one: not a prophet nor a king nor a judge nor a wealthy man.

And when it comes to leaders, the Torah is quite familiar with the temptations of demagoguery, warning in chapter 17 of Deuteronomy that:

When you enter the land the Lord your God is giving you and have taken possession of it and settled in it, and you say, “Let us set a king over us like all the nations around us,” be sure to appoint over you a king the Lord your God chooses. He must be from among your fellow Israelites. Do not place a foreigner over you, one who is not an Israelite. The king, moreover, must not acquire great numbers of horses for himself or make the people return to Egypt to get more of them, for the Lord has told you, “You are not to go back that way again.” He must not take many wives, or his heart will be led astray. He must not accumulate large amounts of silver and gold.

It’s remarkable how many of these limitations Donald Trump has already transgressed.

Obviously, he has already accumulated large amounts of silver and gold. Yet Trump has abused his office to accumulate still more, flagrantly violating the Emoluments Clause already, with foreign actors staying at his hotels, showering favors on Jared Kushner and other members of Trump’s family, and cutting sweetheart deals with the Trump organization. If you don’t think that’s corruption, I’ve got a bridge in New York to sell you.

Trump has also pushed the largest increase in military spending in history – i.e., great numbers of horses – even though the Pentagon itself has no idea what to do with the money. We can’t afford to help old people to eat or poor people to heat their homes, but to feed Trump’s adolescent male need to have the biggest horses in the room, we’ll buy more guns, planes, tanks, ships, and whatever other toys we can find.

Do we think that the military will really get all dressed up and have nowhere to go? Of course not. We’ll go adventuring to metaphorical Egypts around the globe, speaking stupidly and swinging our new big stick to prove how manly our leader is – just as the Torah warned.

Who knows – it’s possible that Trump’s Russian ties may even violate the precept of not appointing a foreigner over us to rule.

But it’s the spirit of Deuteronomy 17 that Trump most violates; the Comey firing is just the latest example. The chapter, and many other passages like it, is warning of a power-hungry, wealth-hungry ruler who discards ethics in the pursuit of his own enlargement. It understands the temptation of the strongman, and the moral danger involved.

Other than Richard Nixon in the Watergate years, the mind boggles to consider a president so engorged with his own hubris, his own vulgarity, his own lack of common decency as Donald Trump.

Let’s not be dazzled by the chintzy gold drapes, the tacky outfits, and the bafflingly ignorant remarks. Trump holds enormous power, and he is gathering up even more of it. Even those who think he is wielding it for the good must allow themselves to be disturbed by the cavalier way in which the president has trampled on the laws and customs of our country.

The man is a menace. He’s fired everyone who has crossed him. He’s ridiculed the judicial system. He’s lied repeatedly. This tyrant must be stopped. Deuteronomy has warned us.