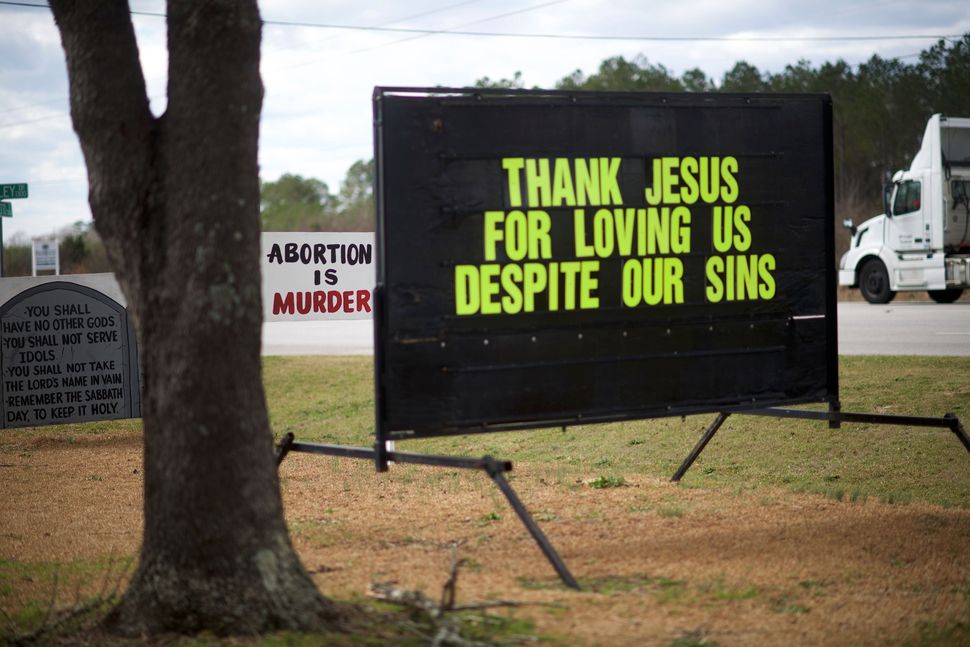 Be careful what you wish for.

For years, the Christian Right, abetted by some Orthodox Jewish allies, has claimed that there’s a war on religion in America. Sometimes it’s the “War on Christmas,” sometimes it’s alleged persecution of Christians for practicing their faith, and sometimes it’s hard to articulate at all.

Well, today, the president of the United States bought into that rhetoric, and announced that he’s ending the war, signing an executive order that was heavy on symbolism and light on substance. Trump’s order focused on fake issues rather than real ones — good news for LGBTs and others who feared being targeted, but bad news for American Jews and other religious minorities.

On the substantive side, the Jewish backers of the action didn’t get anything they had wanted. No changes in funding for religious schools, no religious exemptions to allow discrimination.

But what we all got was an earful of gospel. In case there was any doubt about what “religious liberty” really means in a country that is 70% Christian, the audience in the Rose Garden got serenaded by Christian musician Steven Curtis Chapman (one of his songs was a setting of the Lord’s Prayer) and preached to by televangelist Paula White (who sells “resurrection seeds” for $1,144).

Oh, and Rabbi Marvin Hier, head of the Simon Wiesenthal Center. For a change.

In fact, the one substantive change of note will probably come back to haunt American Jews. That was the effective repeal by Trump of the 1954 “Johnson Amendment,” which prohibits nonprofit organizations — including religious ones – from political campaigning.

Critics had characterized the Johnson Amendment as a gag order on pastors, prohibiting them from preaching about politics. That’s hogwash.

Not only does the law not prohibit political sermons, it’s almost never enforced against churches – the Washington Post found only one investigation in the last 10 years.

But with the Johnson Amendment gone (it’s still on the books, but Trump’s IRS will not enforce it), pastors and rabbis and imams will be under more pressure to be more explicitly political. That’s why most grassroots evangelical pastors actually opposed the change. Can you imagine, now that the gloves are off, rabbis endorsing American and Israeli political candidates from the pulpit? Or being pressured to do so by their biggest donors? It’s a disaster.

Worse still will be the effect nationally. The real backers of the Johnson Amendment were the large Christian mega-organizations, which are now free to donate to candidates, hold political fundraisers, and, in general, become the biggest machers in Washington. That’s terrible news for minorities, including American Jews. Sure, we have our big conferences too, but they’re nothing compared with the largest Christian Right organizations, Protestant denominations, or the Catholic Church.

That’s right, the Catholic Church hierarchy itself can now write checks to American politicians. Is that good for the Jews, Rabbi Hier?

The Executive Order’s only other immediate substantive effect also benefits Christians only: an expansion of the religious exemption from the Affordable Care Act. Now, religious organizations don’t even have to sign a form to get their exemption. They’re now formally above the law.

But it’s the law’s symbolic effect that is more troubling. It sends a clear message: that there was some kind of secularist — media-governmental — elitist war on Christianity – and that that war has now been won by the Christians.

Both of these concepts are bad bits of fake news. Of course there was never a war on Christianity; there were only deep societal changes that made many Christians feel that way. Declining affiliation numbers, increased secularism, rapid changes in technology, and changes in social mores all played a role. So did Christian martyr complexes, Christian end-times beliefs (over three quarters of US evangelicals believe they’re living in the end times) and Christian nostalgia for an America that never actually existed.

This Someone Else doesn’t have to be explicitly Judaized — though it often is, like that six-pointed star next to Hillary Clinton, and those images of George Soros and Janet Yellin. It’s the Jew writ large: the urban cosmopolitan, the secularizer, the person without a soul. Sometimes this is anti-Semitism, and sometimes it’s a structural way of thinking that puts a certain kind of American in the center, and another kind on the fringes.

Hint: we are that other kind.

And then there’s the Order’s remedy to this lurking specter: a return of religion to the public square. That will have a thousand ramifications, from religion in public school to crosses at national monuments. The most significant impacts will be a re-Christianization of America (“Make America Great Again”) and a re-marginalization of everyone else.

Once again, only rarely does this entail actual, direct anti-Semitism. These aren’t the people spraying swastikas on synagogues – that’s a different part of Trump’s base. These are the well-meaning Christian conservatives, often philo-Semitic and pro-right-wing-Israel, for whom America is a Christian Nation and that’s just how it is.

Jewish proponents of these changes — overwhelmingly Orthodox and Republican — are unwittingly selling our country’s pluralistic birthright for a short-term bowl of financial porridge.

Well, the sale has now been made. Let’s see what Mike Pence, Betsy DeVos, Ben Carson, and the rest of Trump’s religious conservatives, have in store for us.

Somehow I don’t think it’ll be all that great.