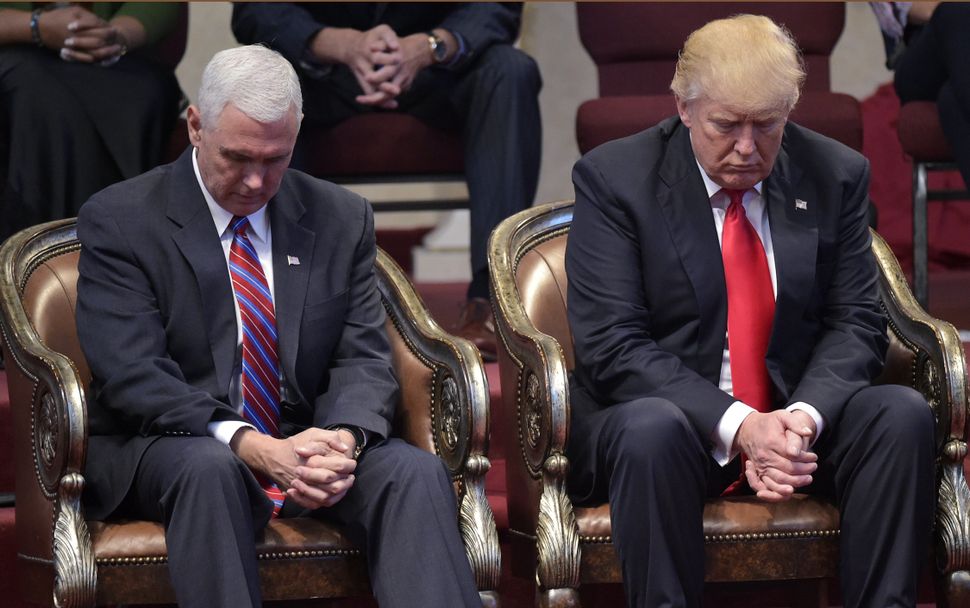 Nothing threatens Jews more than theocracy. When powerful regimes have tried to impose their beliefs on religious minorities, we’ve ended up expelled (The Spanish Inquisition), dead (The Crusades) or coerced into conversion (The Almohad Caliphate in Morocco).

It’s no less true today than it was in 1492: every single brick removed from the American wall between church and state endangers religious freedom. Jews fleeing the Tsar and Nazi Germany for America weren’t just fleeing anti-Semitic violence – they were running toward religious freedom, the opportunity to worship and observe as they pleased, without fear or outside influence.

But President Donald Trump and Mike Pence intend to demolish the entire crumbling wall between church and state. The President just declared that he will “destroy” the 60-year-old Johnson Amendment, passed by the U.S. Congress in 1954, which gives organizations including synagogues and churches, tax-exempt status but prohibits such religious institutions to “participate in, or intervene in (including the publishing or distributing of statements), any political campaign on behalf of – or in opposition to – any candidate for public office.”

The irony is, the Johnson Amendment was never actually intended to create a more robust separation between church and state. Instead, it was proposed by then-Senator Lyndon B. Johnson of Texas, who intended to limit the political power of right-wing nonprofit organizations like the Facts Forum and the Committee for Constitutional Government. That it strengthened the division between church and state was just a happy accident.

Yet the proposed repeal of the Johnson Amendment would have real implications for the misuse of religion. It would allow churches, synagogues and mosques to serve as unregulated funnels for political money – money which could then be used to advocate for or endorse candidates of their choosing. That means that American tax dollars, if Trump gets his way, will now subsidize political activity in synagogues, churches and mosques.

I also worry about pressure clergy will face if Trump and Pence gut the Johnson Amendment. If a congregant or community member with a specific political bone to pick offers a large donation to the parish or synagogue contingent on supporting a specific candidate, the pastor or rabbi will be in a bind.

There is one potential upside to the repeal. Some progressives are arguing that repealing of the restrictions would free left-leaning rabbis and mainline Protestants to preach their consciences and be more frank about their politics from the pulpit. But the truth is, the Reform Movement (and other groups) already tacitly endorse and condemn policies through policy statements made by the Religious Action Center and the Union of Reform Judaism, so it’s not clear that the repeal would, in the long run, be a boon.

Undoubtedly, however, the loss of the law would strengthen those who want to impose the majority religion (Christianity, Evangelical Christianity in particular) on everyone else; all our tax dollars would be, indirectly, subsidizing, political donations made to right-wing churches in the service of advancing a theocratic vision of America. Those monies would ultimately support politicians backing policies that directly threaten American Jews and Judaism: mandatory school prayer, the use of public space for religious symbols – whether that’s the Ten Commandments on a courthouse lawn, or a nativity scene at the state capital – and public school holiday concerts where singing carols about Jesus’ birth is, if not required, then certainly coerced.

Politicians hoping to further blur the lines between church and state dishonor The Bill of Rights. “Congress,” it reads, “shall make no law respecting an establishment of religion.”