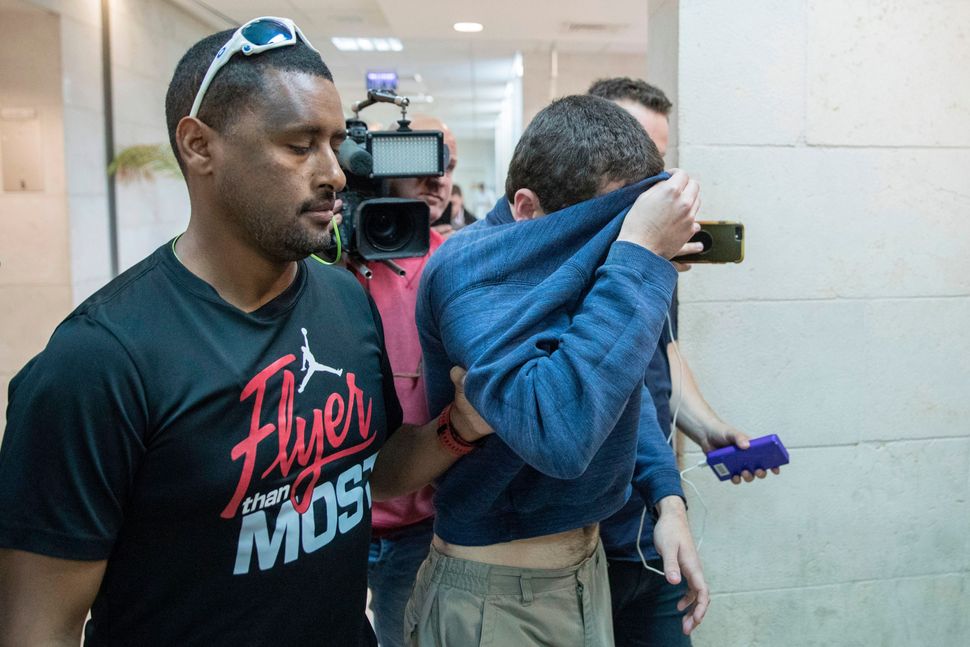 American-Israeli Jewish teenager (R), accused of making dozens of anti-Semitic bomb threats in the United States and elsewhere, is escorted by guards. Image by Getty Images

There’s not much we know about the 19-year-old Jewish Israeli-American who is allegedly responsible for the bomb threats phoned into more than 100 JCCs in the last month. But that hasn’t stopped opportunists from rushing in with simplistic opinions.

For example, hard-rightist Mort Klein, who leads a small organization heavily funded by a few Jewish conservatives, has already said that “apology should be given to the Trump administration,” by those of us who held a populist nationalist accountable for populist, nationalist violence.

Don’t get too excited just yet. Given the suspect’s demographic background, he may turn out to be an American-Israeli right-winger, convinced, as many are, that American Jews need to wake up and realize that we are hated, here and everywhere, and depend on a strong, nationalistic Israel to protect us. Somehow I doubt we’ll hear an apology from Klein’s Zionist Organization of America should that turn out to be true.

Nor do I suppose we’ll hear an apology from Trump’s Jewish supporters if the vandals toppling gravestones in Jewish cemeteries are, indeed, alt-right Trumpists emboldened by his “anti-elite” messaging, his nationalism, and his indefensible yearlong silence on his followers’ anti-Semitism.

On the other hand, maybe the suspect is just a disturbed kid, as his defense lawyers are already claiming – although if he is eventually extradited to the United States, it’ll be hard to prove legal insanity when he planned and premeditated a technologically sophisticated campaign against over 100 Jewish institutions.

The truth, as it often is, will likely fall somewhere in the middle – and as it so often is, that uncomfortable place is where we must learn to make a home.

In fact, it’s worth remembering that this is where we’ve been since the attacks began. Contrary to Klein’s claim, most of those who have connected Trumpist nationalism to anti-Semitic violence have been quite careful to respect uncertainty. My own column on the subject emphasized that “we don’t yet know who is committing these crimes” and that “American Jews are in a state of limbo.”

But when the facts are uncertain and complex, the values at stake should be as clear as possible. First of these is the appropriate limit of responsibility. Obviously, no one is suggesting that Trump personally carried out the attacks, or is himself personally anti-Semitic. He has plenty of Jewish friends, family members and advisors.

Rather, the argument has always been that when you let slip the dogs of nationalism and race-baiting, they will inevitably bite Jews as well as others. Marginalized groups are all in this together.

Retweeting white supremacists, refusing (for months) to condemn anti-Semitism, promoting a nativist populist ideology, using Jewish star images to smear Hillary Clinton, running a television ad days before the election that focused on three Jews as symbols of international financial conspiracy – these are assaults on Jews. But more importantly, they are part of a wider assault on the American idea, and an assault on all of those who are deemed outsiders by the Trump base.

That is especially true in the era of ubiquitous technological sophistication. Right after the suspect was arrested, I chatted with web technologist and former Jewish community professional Daniel Sieradski, and asked him how one kid (disturbed or otherwise) could have potentially pulled this off feat of hatred.

Sieradski told me that actually, “technologies that enable you to conceal your identity while making phone calls are not that hard to come by. Spoofing a telephone number, masking one’s voice, hiding one’s IP address from a VOIP provider, paying for services anonymously with Bitcoin — all these things are widely available.”

In fact, Sieradski continued, “linking them together doesn’t take all that much ingenuity, just the technical prowess of your average 19 year-old computer enthusiast … someone could pull off something similar with about 30 minutes of Googling.”

Which really amplifies the point. We are living in a technological tinderbox, because it’s so easy for someone to turn a spark into a fire. If a single teenager could theoretically terrorize thousands of American Jews, responsible leaders need to be as judicious, measured, and reasonable as possible in word and deed – the precise opposite of President Trump.

We also need to get more sophisticated about what anti-Semitism even is. Clearly, it is not just any animus that happens to be directed against Jews. It’s not animus against the Jewish state.

But it’s also more than swastikas. Professor Samuel Hayim Brody, a Kansas University professor pursuing a research fellowship on Jewish thought and economics at Penn, emphasized that nationalist “anti-elitism” has long walked hand-in-hand with anti-Semitism. Jews, Brody said, are often “a symbol of modernity for counter-enlightenment and anti-modern forces … Rural life was being destroyed and replaced with city life? That helped the Jews. Agriculture was being displaced by the liberal professions? Jews benefited from that too. Capitalism encouraged free trade over protectionism? Jews were the internationalists who benefited from that.”

“So,” Brody told the Forward, “when you see people blaming a country’s problems on a ‘globalist’ cabal, the media, and ‘coastal elites,’ that’s drawing on this long history even if it doesn’t advertise itself as anti-Semitic. That’s why the Spencer and Duke types know that Bannon is their guy, even if he only winks and nods in their direction.”

That logic remains in place regardless of who made the phone calls, even if it turns out to be a Jew trying to scare other Jews into adopting their own kind of nationalism. There are many kinds of anti-Semitism and bigotry, some emanating from Muslim extremists and some emanating from anti-Muslim extremists; some from the left and some from the right; some overt and some quite subtle.

But all of it with the same targets: mostly, innocent Jews trying to go about their lives – but also the very idea of a tolerant, multicultural democracy, now besieged on all sides.