Why Anti-Semitic Attacks Are Good For Donald Trump 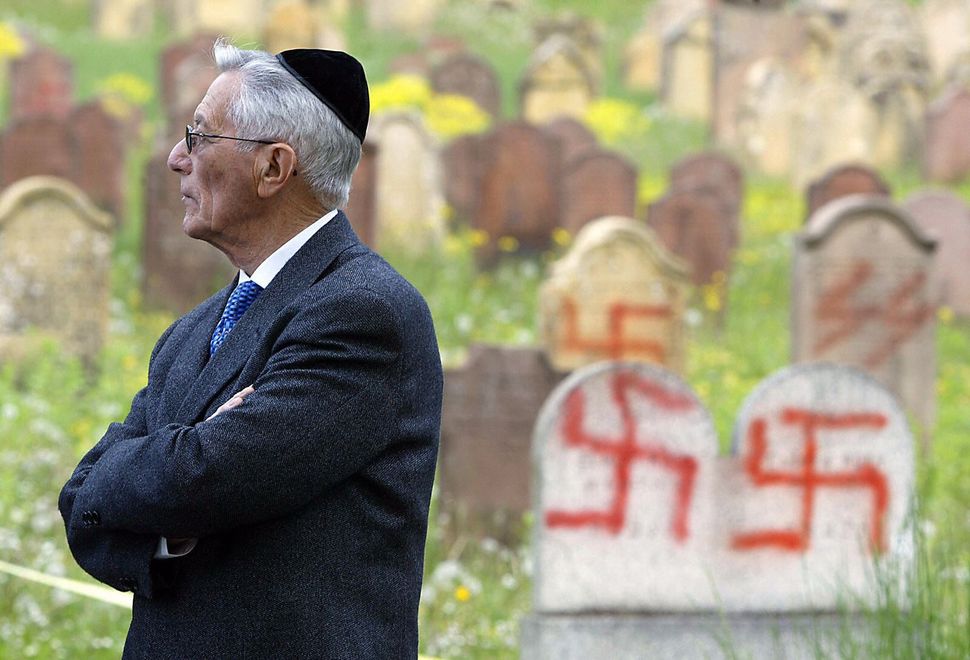 More than 200 headstones overturned. Eighty-nine bomb threats and counting. We are living through a paroxysm of anti-Semitic violence not seen in the United States in two generations. But there are at least three crucial questions to which we do not know the answer.

Or maybe, as seems more probable, it’s some degenerate members of the “alt-right,” perhaps the familiar, ignorant man-boys inspired by the bully in chief, clinging to white supremacy as a crutch to support their fragile egos. That’s certainly what we’re assuming, but it’s perhaps more disturbing to remember that we don’t actually know.

The second thing we don’t know is whether these threats and attacks represent a return of mass anti-semitism or simply the emboldening of a tiny group by the Trump movement. Unless and until we learn more about the perpetrators of the attacks and threats, it’s premature to sound the alarm that widespread antisemitism has returned to our lives, despite the (sometimes literally) genetic predisposition many of us have to feel that way.

Clearly, Trump has emboldened those who hate. But have the haters grown in number, or only in audacity?

As such, American Jews are in a state of limbo. Belated condemnation notwithstanding, can pro-Israel hawks still support Trump even when the movement he leads has brought terror to the lives of thousands of American Jews? How bad is the situation? Is it the usual fringe, bolder than usual, or are we indeed witnessing the early stages of a Nazi-like period? Should we attempt to calm the community, or wake it up?

These are existential questions for American Jews, yet they don’t have any responsible answers. It’s appropriate that the holiday of Purim is upon us – the day of randomness, uncertainty, dread, violence and luck.

There’s a third set of unanswered questions: where all of this is headed, what it means, who wins, who loses. That’s the broadest unknown.

My take is that the attacks are good for Trump, bad for the anti-Semites and probably bad for the country.

It’s abundantly clear that, since the beginning of the Birther Movement, Donald Trump has willingly exploited the nativist and racist feelings of his base, while remaining just enough above the gutter to escape direct culpability. He impugns Mexican immigrants, but not Mexicans per se. He questions Barack Obama’s citizenship and religion, but never utters an overtly racist word against him.

And, when it comes to Jews, he has long coddled the anti-Semitic fringe of the alt-right, retweeting them during the campaign (sometimes forgetting to delete the overtly anti-Semitic images in their memes) and somehow failing to condemn the overt white supremacists within his supporters’ ranks.

Hey, my daughter is Jewish, he has pointed out. Often angrily, as in the strikeout response to a Jewish reporter’s softball question that should have been an easy homer.

That approach – dog-whistling to the base, denying responsibility to everyone else – finally ran out of steam, when, after being urged to do so by seemingly every Jew in America, Trump finally condemned antisemitism and dispatched Vice President Pence to volunteer at the desecrated Shaarei Hesed cemetery outside of St. Louis.

Ultimately, Trump’s at-long-last condemnation will indeed cost him some votes from extremists. There are already some nut-jobs on Reddit who are deserting him – and, indeed, they are the biggest losers in this affair. For a moment, it seemed like the Richard Spencers of the world might enjoy a heralded place in Trumpland. And thanks to this newspaper’s reporting, we know that a Hungarian nationalist with ties to the anti-Semitic Hungarian far right has somehow gotten a job in the White House. But overall, the overt anti-Semites have been thrown under the bus. They forced the issue, and they lost. The quiet agreement between the true bigots and their Trumpist enablers is over.

This shift will help Trump more than hurt him; legitimize him more than undermine him. Having been forced, finally, to choose sides, Trump can now say and do all kinds of things to cheer the hearts of Jewish Republicans. He can issue proclamations, launch investigations, perhaps even visit a repaired cemetery himself.

It’s also a win for the alt-righters within Trump’s inner circle, most notably Steve Bannon. With their boss cutting loose the overt anti-Semites, the Steve Bannons of the world will now be that much more legitimate – and thus more dangerous. Bannon’s dystopian, ultra-nationalist view of the world – informed, of all things, by the Bhagavad Gita’s notion of the sacred responsibility for violence – doesn’t need actual anti-Semites hanging around its neck like an albatross. Its formal antisemitism – good nationalists versus bad cosmopolitans, good rural masses versus bad urban elites – is far safer.

Which is why, ultimately, these threats and desecrations could be so bad for America. If nationalists like Bannon somehow seem more moderate than anyone, we’ve lost our moral mooring.

Oddly, blaming moderates for extremists does work when it’s conservatives doing the blaming. Consider every Muslim, or Black Lives Matter supporter, blamed for the actions of a tiny minority.

As others have noted, though, there is one saving grace of this administration: it’s incompetence. God help us, they might actually be effective if they didn’t commit unforced errors every single day. But with Trump, it’s always one step up and two steps back.

In this case, just as Trump condemned the attacks, even calling them out in his address to Congress, he undermined himself with his outrageous suggestion that they were a false flag. And whoever slapped the administration’s budget plan together managed to commit yet another unforced error: proposing the elimination of the Special Envoy for Monitoring and Combating Anti-Semitism, leading to a swift and intense backlash.

Perhaps, then, Trump will blow this one too. Perhaps he won’t tack to center after all, or will trip himself up every time he tries. Perhaps the gestures of unity – Muslims aiding Jews in restoring the cemeteries, for example – will successfully turn the tide against this administration and all the bigotry, not just the anti-Semitic kind, that it has promoted.

Perhaps, in other words, enough American Jews will see that we, the Muslims, the Mexicans, the refugees, and everyone else Trump targets, are in this together. That wouldn’t quite make up for the terror these anti-Semitic acts have caused – but it would be the perfect response to them.

Why Anti-Semitic Attacks Are Good For Donald Trump