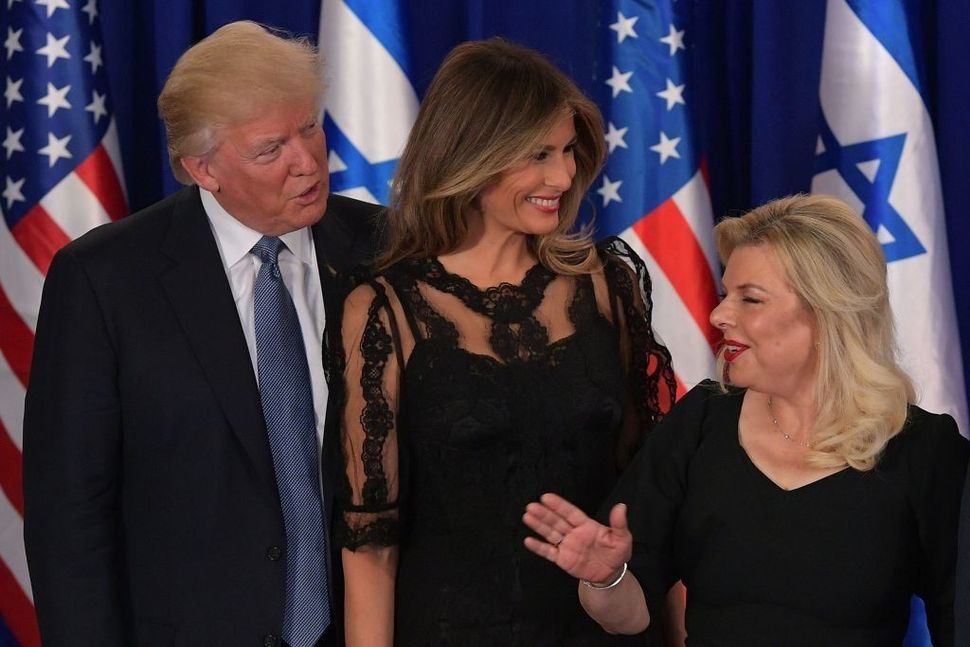 When Melania Trump chatted with Sara Netanyahu on the tarmac at Ben Gurion International Airport in Tel Aviv yesterday, the two women quickly discovered they had a common bond.

“You know in Israel all the people like us. The media hate us but the people love us,” Netanyahu, wife of the Israeli prime minister, Benjamin Netanyahu, reportedly told the first lady in a recording that picked up their private conversation. “Like you.”

To which America’s first lady replied, with a broad smile, “We have a lot in common.”

We don’t know if Melania Trump had a similar conversation with the wife of King Salman of Saudi Arabia at her previous stop on the administration’s inaugural overseas trip. (Women were largely invisible during the official visit, and Salman’s wife, also his third, is something of a mystery.) But these ladies, too, might share an adversarial relationship with the media, because the Saudi monarchy hates free expression to an even more dangerous degree.

In fact, Saudi Arabia is one of the most repressive nations in the world. The Committee to Protect Journalists ranked the kingdom third, after Eritrea and North Korea, on its list of the most censored countries. Since the Arab Spring, CPJ reports, the Saudi leadership has progressively intensified legal repression, using the supposed fight against terrorism to criminalize virtually any expression critical of the government or its strict interpretation of Islam.

Reporters Without Borders, meantime, ranks Saudi Arabia a dismal 168 out of 180 countries in its World Press Freedom Index.

The other significant nation in the Sunni alliance that the Trump administration is eagerly courting is Egypt, and its record on media and free expression has gone from bad to worse under President Abdel Fattah el-Sisi. RWB says that Egypt (#161) is “now one of the world’s biggest prisons for journalists,” many of whom spend years in detention without being charged or tried.

Why is this relevant? Because the Trump administration’s dramatic decision to align with the Sunni coalition led by Saudi Arabia and against Iran puts the United States clearly on the side of authoritarian, repressive regimes. And while Israel does not share such repressive measures, the pivot away from engagement with Tehran is just what Benjamin Netanyahu has wanted for years, and was the underlying source of his tension with the Obama administration over the Iran nuclear deal.

Not that Iran is an example of Jeffersonian democracy; it ranks 165 on the RWB list and seventh on the CPJ list of the most censored countries. Washington Post reporter Jason Rezaian is suing the Iranian government over his 18-month imprisonment in Tehran.

But Iran also just held a national election that resulted in a landslide victory for the more moderate incumbent, President Hassan Rouhani, who now faces heightened expectations that he will continue to try and implement his reform agenda.

No matter how besieged President Trump and Prime Minister Netanyahu feel about the media in their respective countries — Trump calling America an “enemy of the people,” Netanyahu declaring war on certain journalists — nothing in the United States or Israel compares to Saudi Arabia or Egypt, of course. But the Trump administration’s decision to ignore human rights and democratic principles for a short-term, transactional, anti-Iranian foreign policy, a decision embraced by Netanyahu, contains dangerous potential consequences.

The dictatorships with which the United States and Israel are aligning are responsible for igniting terrorism, too. As Richard Haass, president of the Council on Foreign Relations, observed on MSNBC yesterday, the Sunni Arab world “is one of the drivers of terrorism. If you look at 9/11, you look at the rise of groups like Al Qaeda, it’s because of the flaws in these societies.”

Repressive regimes suppress free expression, jail and murder journalists, and restrict the media to pretend that those flaws do not exist. There was a time when the United States stood against such behavior. No more. Now the first family prides itself on being hated by its own media, and turns a blind eye when that hatred goes to extremes in the countries we want, for the moment, to back.