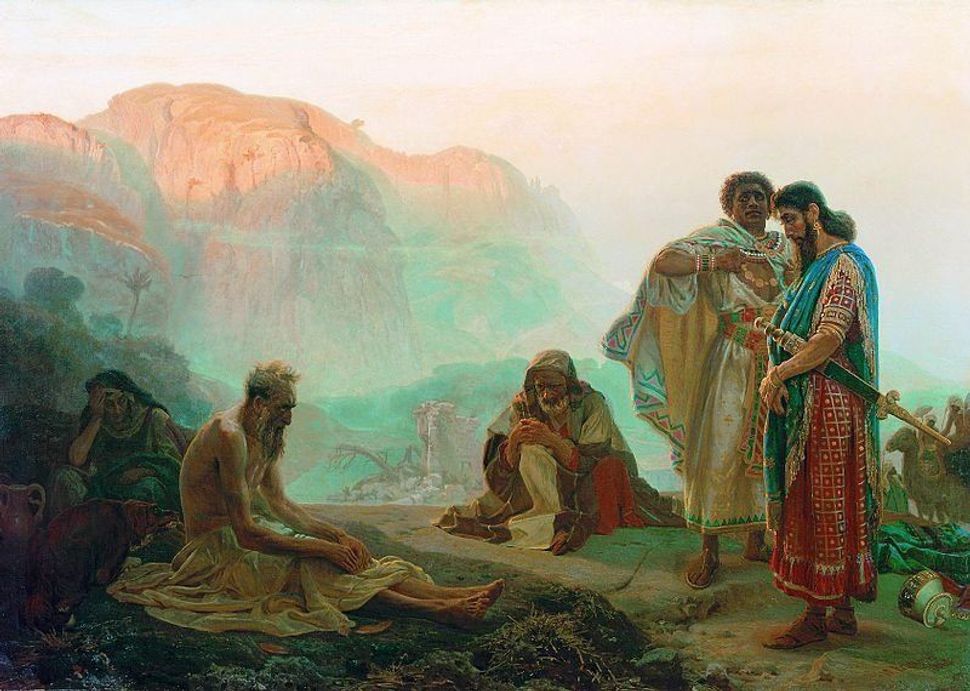 I’m struck by the punitive nature of the new White House budget proposal on the poor — which involves cutting $274 billion over ten years from anti-poverty programs like food stamps, tax credits and welfare, as well as austere reforms on Medicaid and disability insurance while boosting military spending.

All of the early quotes commenting on the budget involve the standard GOP talking point — sentiments along the lines of, ”people should go to work and not rely on the government,” but, in light of this and the recent passage of the harsh Republican health care bill in the House, I’ve been thinking a lot about suffering, and how we make sense of it.

After all, health insurance is most certainly an attempt to address the possibility or eventuality of certain kinds of bad things happening, and food stamps and welfare help address the bad things that have already come to pass.

Several weeks ago, Alabama congressman Mo Brooks was quoted saying that the merit of the AHCA was that it “allow[ed] insurance companies to require people who have higher health care costs to contribute more to the insurance pool…thereby reducing the cost to those people who lead good lives, they’re healthy, they’ve done all the things to keep their bodies healthy.” In other words, if you get sick, it’s because you did not lead a “good life” and, one presumes, deserve to pay for it. It’s only fair!

This radical individualism undergirds much GOP thinking — the individual is obligated to manage alone, without help from a larger societal network or safety net. Nobody is there to hold you if you incur high healthcare costs, need to keep your child from starving or are unable to rise from poverty because one of many possible systemic hurdles; that’s all on you.

But Brooks’ language of “leading good lives” smacks of moral judgement — the presumption that, somehow, being “good” will keep you from harm. It mirrors, as others have observed, the theology of the prosperity gospel — the notion that God rewards the faithful not only in the next life, but in this one as well. If you’re rich and healthy, it’s because you deserve to be, because you’ve actualized your divine potential. You’re #blessed, literally — blessed by God. If you’re poor and/or ill, well, it’s your own fault, a result of your own spiritual failings — not the result of systemic oppression that can impact generations, not the victim of our collective pollution of the air we breathe and water we drink, not, simply, the inhabitant of a messy, frail body prone to error.

While it’s impossible to ascribe a theodicy — a theological explanation for suffering — to policy, both the AHCA and Trump’s budget smack of these lines of thinking. Those who have “led good lives” are, presumably, not only healthy and free of pre-existing conditions, but have been #blessed by God enough to afford insurance on their own, free of disability, with a nice cushion for emergencies because nothing could be the difference between being on one’s feet and the bottom dropping out. Between the lines is the insidious logical move, the one that posits that if those who have been “good” stay healthy… well, perhaps the ill, and the poor… aren’t blessed by God in nearly the same way, but they could still double down spiritually.

Obviously, this attitude belies the Bible’s overall attitude towards the poor and vulnerable — both the Hebrew Bible and the New Testament make it clear that it’s the job of society as a whole to care for the economically marginalized and to share wealth. But this theodicy, too — the sheer, arrogant, victim-blaming whole of it is counter to Scripture as well.

The Biblical explanation of suffering is fleshed out in the Book of Job, where a rich, righteous man is suddenly beset with misfortune — he loses his wealth, his children die, and he is struck with a horrible, painful illness. Much of the book consists of, more or less, Job trying to understand why this has happened to him, and his friends offering trite, pat explanations, much in the vein of Mo Brooks. Towards the end of the book, the character of God finally appears and offers what is perhaps one of the greatest smackdowns in the history of literature:

“Who is this that darkens counsel, speaking without knowledge? … Where were you when I laid the Earth’s foundations? Do you know who fixed its dimensions or who measured it with a line? … Can you tie cords to Pleiades or undo the reins of Orion?”

God goes on and on in this vein for some time — saying, effectively, “Did you create the Universe? No. Did you put the stars in the heavens? No. Do you know how all this works? No. So why would you presume to understand anything about the hows and whys of human suffering?”

I understand the desire for certainty and clear answers, I really do. But not even the voice of God in the Biblical whirlwind is willing to come forth with strong statements about why it is that people suffer. The Bible does make clear, however, that our job is to do everything in our power to prevent suffering, how — and whenever we can.

Of course, some pain is inevitable; we are frail creatures living in imperfect bodies, and we were never promised a life free of pain. But being poor, being ill, being, even momentarily, not #blessed in every way, is not a moral failing.

If you’re poor or sick, it’s not your fault.

If you’re suffering, it’s all of our responsibility.

Danya Ruttenberg, the rabbi-in-residence at Avodah, is the author of “Nurture The Wow: Finding Spirituality In The Frustration, Boredom, Tears, Poop, Desperation, Wonder, and Radical Amazement of Parenting” (Flatiron Books, 2016).