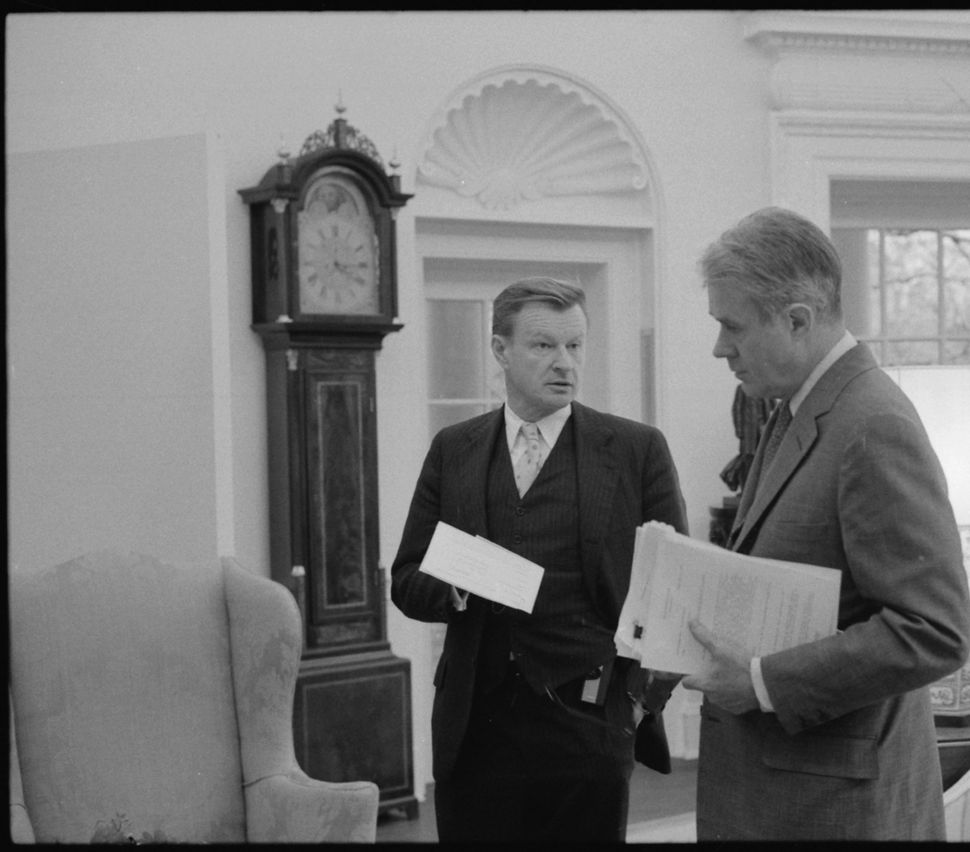 In the spring of 1976, the Democratic presidential candidate Jimmy Carter appointed Zbigniew Brzezinski (March 28, 1928 – May 26, 2017), who was teaching at Columbia University, as his foreign policy adviser. I served at that time as the director-general of Israel’s Foreign Ministry, and I knew that Brzezinski had never visited Israel, so I suggested to Foreign Minister Yigal Allon to invite him to Israel before the November election, since he might be appointed to a senior position in the administration if Carter wins. This indeed happened: He was appointed national security adviser.

Allon agreed, and during a visit to New York I met Brzezinski, whom I had known from previous academic conferences. We sometimes disagreed on Middle Eastern issues, and had a spirited, though friendly, exchange in a series of articles in Foreign Policy magazine. I met Brzezinski in his office in Manhattan and extended the invitation, which he accepted. A date was set for the end of June.

At the end of our meeting, Brzezinski surprised me with a question: “What is Keren Kayemet le-Israel?” he asked, pronouncing the Hebrew name of Jewish National Fund in his distinctive Polish-American accent. I explained, and asked him for the reason for his interest. He then told me the following story. In the 1930s his father, Tadeusz Brzezinski, a scion of a liberal gentry family, served as Polish consul general in Leipzig, Germany. At that time, there was in Leipzig a considerable Jewish community of Polish Jews who had fled to Germany during World War I and stayed there after the war, without ever regularizing their legal status. Consequently, many were technically stateless, and one of the first anti-Jewish measures the Nazis undertook when they rose to power in 1933 was to try to expel these Jews to Poland; however, Poland refused to accept them, arguing that they were not Polish citizens.

Since most of these Jews had no citizenship papers of any kind, they could not even apply for immigration to a third country, and were thus stuck between two countries that did not want them.

In distress, the community turned to Consul Brzezinski. He understood the impossible situation they were in, and, without asking permission from Warsaw, he issued them Polish laissez-passer documents and in some cases even Polish passports, so that they could apply for entry to other countries (including Palestine). In this way, a few hundred of them were able to leave Germany and were saved. In gratitude, Brzezinski went on to tell me, they decorated him “with some sort of award” from JNF.

On returning to Jerusalem I checked with the JNF head office, which found the record: The Polish Jewish community of Leipzig contributed ₤45 (then a considerable sum) to inscribe Consul Brzezinski in the “Golden Book” of JNF.

I asked the office to prepare a facsimile of the original award document.

Brzezinski arrived in Israel in late June, in the middle of the crisis caused by the hijacking of the Air France airliner to Entebbe with almost 100 Israeli passengers on board. This, of course, overshadowed his visit, but we tried to carry it out more or less as scheduled. He met with Allon, and on Wednesday that week I hosted a small dinner party in his honor. One of the people invited was my former philosophy teacher at the Hebrew University of Jerusalem, Nathan Rotenstreich, whose father, Ephraim Fischel Rotenstreich, served as a member of the Polish Senate in the 1920s. He and Brzezinski had a lively exchange of memories, especially as their families came from the same region of southern Poland.

Conversation at dinner, disrupted by phone calls to which I had to attend, focused, without a doubt, on the plight of the hijacked Israelis and what could be done to save them: The Palestinian hijackers, aided by some German terrorists of the Baader-Meinhof group, threatened to kill the captives if their demands were not accepted. Brzezinski mentioned how terrible it was that Germans were involved in the hijack, and then added, “As a Polish patriot I was deeply impressed by how the whole country virtually stopped breathing in solidarity with the hijacked victims.’”

This was, undoubtedly, the moment to present Brzezinski with the award document honoring his father for helping Jewish refugees trying to flee Nazi Germany.

This was the only time I ever saw Brzezinski get emotional. Known for a certain rigidity, if not harshness, on that occasion he responded differently and said, in a slightly choked voice, “Yes, this is what solidarity means – in 1933 as well as now.”

On Friday evening Brzezinski joined Shimon Peres, then defense minister, for a Sabbath dinner at his Tel Aviv home. He seemed troubled by what appeared to be Israel’s helplessness, and asked Peres why Israel does not carry out a rescue operation. By that time the decision to carry out the raid had already been made, but Peres succeeded in sidetracking Brzezinski’s attention by saying: “What can we do? We’re trying to find out.”

On the morning following the successful Entebbe operation, Brzezinski called me before leaving the country. He was full of admiration for the incredible success of the rescue operation, as well as for the sang froid expressed by Peres on Friday night. By that time, he had already visited the Gilo and Ramot, new neighborhoods in Jerusalem across the old 1967 armistice line, and said: “I understand the logic: These are facts on the ground which would be difficult to undo.” I could not help but agree with him.

One of our later meetings occurred in Berlin in the 1990s. It was held at a conference at the German Defense Ministry, which had just moved to former East Berlin from Bonn. During the lunch break, Brzezinski and I took a walk in the former buffer zone between the two parts of Berlin, which was being totally obliterated by the massive building spree intended to wipe out any remnant of the city’s division. We walked in silence, overwhelmed by the enormous power of united Germany reflected by this national effort. At one point Brzezinski interrupted our silent reflections and said: “As you can imagine, I have no nostalgia for Communist regimes. But in this case I sometimes think that there was some historical justice in Berlin being divided.” Once again, I agreed with him.

Shlomo Avineri is a professor of political science at the Hebrew University of Jerusalem and a member of the Israel Academy of Sciences and Humanities. His most recent book is “Herzl’s Vision: Theodor Herzl and the Foundation of the Jewish State.”