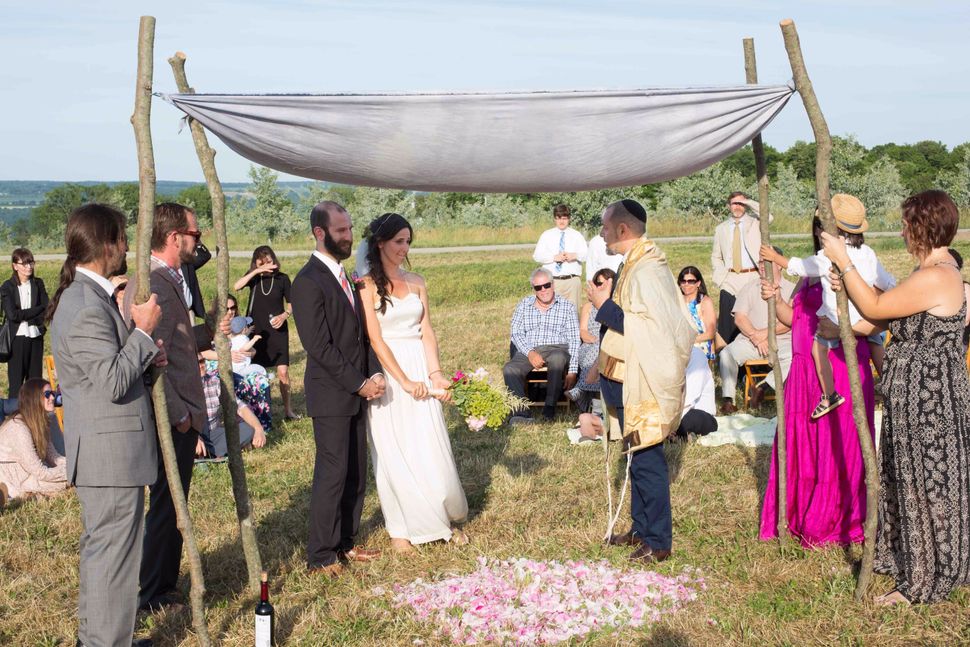 Early in my career as a journalist, a brilliant editor encouraged me and other reporters to look for the stories that “oozed” — the ones that are found just below the surface — because day-to-day news can obscure deeper and more significant trends.

Among Orthodox Jews, the oozing story of our day is the emergence of a traditionally learned and trained cohort of women spiritual leaders who will, in my estimation, challenge the gender hierarchy of the most conventional and fastest-growing segment of American Jews.

Among Conservative Jews, the oozing story is intermarriage.

All around are incremental signs that the old norms are being changed or challenged. Individual synagogues are now allowed to accept non-Jews as members — although in only a limited way. Some rabbis are quietly ignoring the prohibition against attending marriage ceremonies of a Jew and a non-Jew. One or two are not so quietly defying the restriction against officiating at such weddings altogether.

As intermarriage rates continue to rise, the Conservative movement — wedged between the more insular Orthodox and the more open Reform — is struggling to balance its signature embrace of modernity with the strictures of Jewish law and tradition.

Into this mix comes Amichai Lau-Lavie, an entrepreneurial, boundary-breaking rabbi with a radical proposal to welcome the non-Jew under the Conservative wedding canopy. The result of a year of deep thought, study and conversation, his proposal — which he intends to soon unveil publicly — will surely be the subject of praise, skepticism and some derision.

Count me as one of the skeptics. But after two long conversations with Lau-Lavie, I came to appreciate the evolution of his argument and the need for bold experimentation in the face of unstoppable social dynamics. “How do I come to this with more love and less fear?” he asked. And, surprisingly, he found the answer in tradition.

His quest grew out of his own experience. Although ordained at the Jewish Theological Seminary only last year, Lau-Lavie, 48, has functioned as a spiritual leader ever since 2013, when he founded Lab/Shul,. The organization defines itself as an “everybody friendly, artist-driven, God-optional, experimental community for sacred Jewish gatherings based in NYC, reaching the world.”

As you can tell, it’s the kind of place that’s going to attract unconventional people, including couples that have one non-Jewish partner and want Lau-Lavie to officiate at their wedding. “I faced the unbearable response of having to say no — to some friends, to some family members,” he recalled during a recent interview in the Forward’s offices. “It became a betrayal of why I became a rabbi in the first place. I needed solutions.”

So he embarked on a project to research the Bible and Halacha, Jewish law, hoping to stumble upon some precedent for intermarriage, since, after all, Jews have lived alongside non-Jews for centuries. He came up empty-handed. Jews were not permitted to marry non-Jews, end of story.

But Lau-Lavie was captivated by a related concept that he first thought about in a JTS class: the ger toshav, akin to a “resident alien” or “temporary immigrant,” mentioned in the Torah and then woven through rabbinic literature. It’s an invented term to describe a non-Jew who lives among Jews and ascribes to basic Jewish laws. “Not a foreigner, not a Jew,” he said. “It’s our neighbor, who has not converted but is choosing to be part of the Jewish community. I almost hear the conversation that echoes today.“

Lau-Lavie is not the first to suggest adapting this construct to marriage, and his proposal is not meant to push for an actual change in Jewish law (yet). But he envisions using the ger toshav within a halachic framework to justify intermarriage under certain conditions.

He will ask prospective couples to devote at least six months before the wedding to learning more about the core Jewish values that matter most to them — whether those values include connection to Israel, celebration of Shabbat and holidays, study of Torah, or pursuit of social justice — and to demonstrate a genuine commitment to community.

“What should make a difference is not what is in your blood or on your documents,” he told me. “It’s did you show up. Are you a part of this?”

He won’t officiate if it’s clear that the only reason a couple wants a rabbi is to placate Grandma. And he won’t co-officiate with non-Jewish clergy. “Even if the couple is of mixed heritage, the wedding shouldn’t be mixed on messages,” he argued.

Perhaps the most intriguing aspect of his proposal is to essentially turn the experiment into a clinical trial. He plans to engage academics to study whether this explicit welcome-with-conditions will result in a strengthened Jewish commitment or just another data point in the depressing trend of intermarried couples moving further away from Judaism.

There are plenty of pitfalls. Some, Lau-Lavie is aware of and is grappling with already. His proposal turns rabbis into gatekeepers, with the power to decide who is sufficiently Jew-ish enough to marry, and that go-it-alone approach is problematic. He also is defying the norms of the Conservative movement and most likely will have to resign from The Rabbinical Assembly — which he said he would do “with pain and respect.”

Beyond the bureaucratic and structural questions, though, is a more basic one: Haven’t we tried this already? Reform rabbis are officially discouraged from performing intermarriages, but many still do so; half of Reform Jews are married to non-Jews, with the percentage rising dramatically among younger Jews.

Meantime, the smaller Reconstructionist movement decided in 2015 that even its rabbis can have non-Jewish spouses.

And we know that those interfaith families are far less engaged in Jewish life on just about every measure you can imagine.

Here, Lau-Lavie is, I think, overly optimistic about the uncharted waters he is trying to navigate for a Conservative movement that still holds to central Jewish values, in-marriage being one. It is true that identity — be it religious, gender, ethnic, whatever — is becoming less binary, more fluid, more hybrid in America writ large, and the firm distinctions between Jews and non-Jews seem ridiculous to many younger Jews. So does the need to choose between love and tribe.

But the reason this story is “oozing” is because we don’t know how and where it will end. How important are boundaries to maintaining social cohesion? How can non-Orthodox Judaism remain distinct and value-driven if its connection to genuine Jewish life and commitment is ever more tenuous? Even if the ger toshav had been a feature of Jewish communities historically, the scale of Jewish interaction with non-Jews is dramatically different in 21st-century America.

Lau-Lavie, to his credit, recognizes the risks involved in his approach. “It’s a huge paradigm shift,” he acknowledged. “I hope I won’t be remembered as one who opened up more floodgates. Instead, I want to be part of a wave of people who safely negotiate between what we inherited and what we pass on. We’ve got to adapt. Keeping [intermarried couples] involved in my community raises the chances of Judaism reinventing itself.”

His presence as a Conservative rabbi does offer proof of the power of adaptation. Lau-Lavie is a scion of a rabbinic dynasty that dates back 39 generations, but as a gay man he did not have a sanctioned place in leadership of a halachic movement — until 2006. “I’m here as a gay man because the rabbis in the Conservative movement redefined thousands of years of abomination and stigma. I’m part of that grateful thread,” he said. “And we keep evolving.”

The difficult task is discerning when evolution bleeds into extinction. I am fascinated by Lau-Lavie’s experiment, but even if it is deemed successful, even if the couples he will now marry remain fervently part of the Jewish conversation many years hence, we still don’t know whether this approach can sustain and enrich modern Jewish life on a much larger scale.

Go to Forward.com in the coming days to read responses to Amichai Lau-Lavie’s proposal.